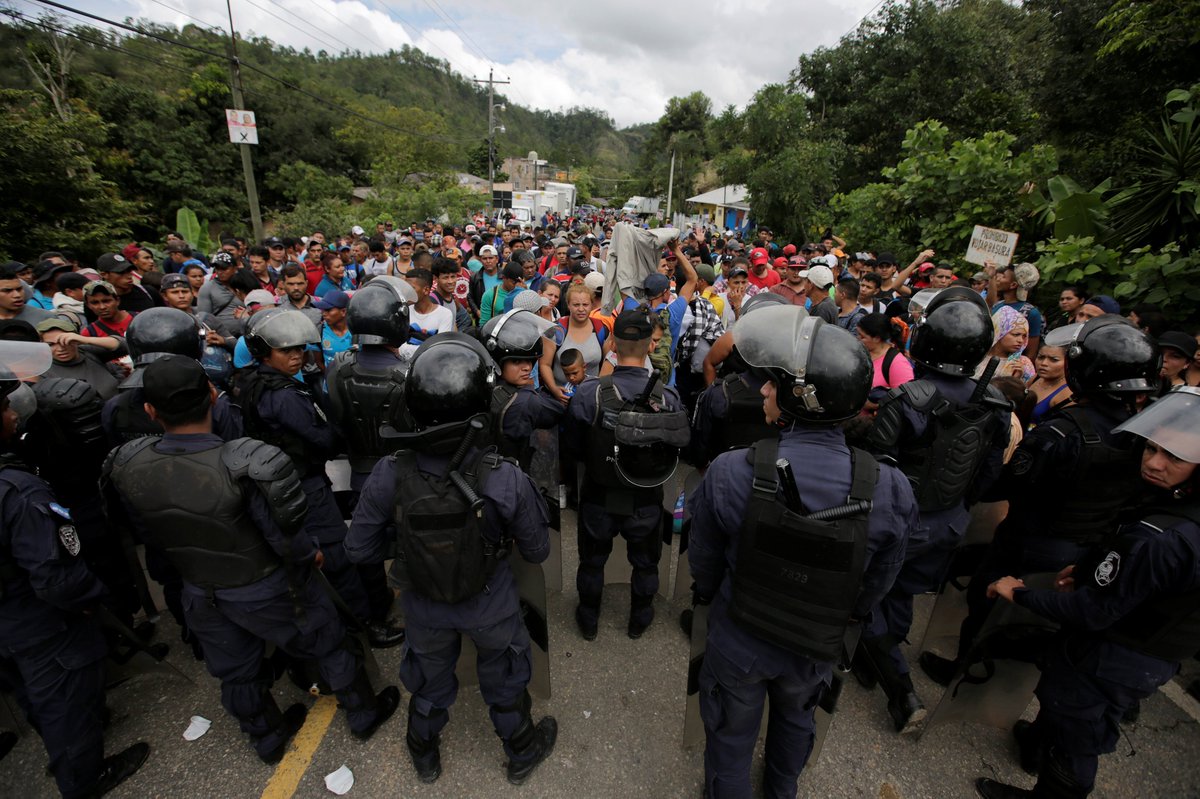 It looks like the “Meskin” government actually listens to President Trump’s words, and does what he says, unlike most branches of the US “feral gummint”. You think I am kidding, I know. Yet, judging from what happened today, the POTUS has more control over the governments of Latin America, with an emphasis on immigration policies, than he does over the US government. At least, he’s controlling the Mexico border, or so it appears. Here’s from USA Today:

The government of Mexico dispatched two 727 Boeing planes filled with federal police officers to its southern border with Guatemala on Wednesday to intercept a caravan of Central American migrants who are trying to reach the U.S. border.

The group of migrants swelled to an estimated 4,000 people even as President Donald Trump has condemned them and threatened to cut aid to Honduras if government officials do not cooperate in preventing their trip to the U.S.

So, the Mexican government deployed hundreds of police officers in full riot gear on Thursday on the international bridge in Suchiate, on the Mexican-Guatemalan border that is, as a caravan of illegal immigrants are getting ready to cross Mexico on their way to El Norte. Moreover, after President Trump threatened to cut aid and to deploy the military to close the US-Mexico border, the Guatemalan government showed its cooperation by sending police reinforcements to its side of the border.

As Ruby already told us in her article, there is video footage from Honduras with people giving cash to women and children to join the caravan and storm the US border, just in time for the midterm election, i.e. it appears like some mysterious benefactor is bribing them to hike north.

This is from the Mexican constitution:

Every person has the right to enter and leave the country, to travel through its territory and to move house without the necessity of a letter of safe passage, passport, safe-conduct or any other similar requirement. In the event of criminal or civil liability, the exercise of this right shall be subject to the judicial authority.

Relating to limitations imposed by the laws on immigration and public health, or in respect to undesirable aliens residing in the country, the exercise of this right shall be subject to the administrative authority.

See also  ‘Trump Won By Over 1 Million Votes In Pennsylvania’

Now we know why Mexicans haven’t done much so far about the illegal immigrant caravans crossing their country.  Also, you can drive in to Mexico (from USA) without getting your passport checked. As per one of the caravan leaders, Edgar Elias interviewed by AFP:

“We’re going to rest here and wait for the others who are on their way so we can enter (Mexico) en masse, like we did at Agua Caliente,”

So, the migrants (the correct word would be invaders) plan to wait for the rest of the caravan to arrive, then cross the border en masse in hopes of overwhelming the Mexican authorities, who have vowed to detain anyone without a visa. The key word here is “overwhelm.” . By the way, the cost of DACA “Dreamers” to US taxpayers so far is at least $80B. The total cost of Trump’s  border wall would be around 20B.

At what point do we use our military to stop this? I’m not talking about a police action, I mean an all out fight against an invading force at the border.

I don’t get it: if these people are fleeing their shithole country, why are they so proud to hold the Honduran flag? If they wanted my sympathy, they’d be marching with the American flag. These so-called asylum seekers are claiming to be fleeing from violence and crime in their countries, I mean that is their claim for asylum. What about Detroit and Chicago and all the places in this country where the same conditions of poverty and crime exist? Where do those people go for asylum?

If these Hondurans are leaving for economic reasons, then they need a visa. If they claim to be refugees seeking asylum, international law dictates that they can only seek asylum in the first safe country they enter. And that would not be the US. To country-shop for the best welfare and benefits is both illegal and immoral.  Make no mistake, they are being paid to come here to vote, which they can legally do in California and other sanctuary cities. No voter ID needs to be shown in DEM strongholds. Anyone can walk up, get a provisional ballot and fill it out.

In closing, I don’t mind if people dislike Trump, but his call of withdrawing aid money seemed to do more than anything else. Money talks.

We have today informed the countries of Honduras, Guatemala and El Salvador that if they allow their citizens, or others, to journey through their borders and up to the United States, with the intention of entering our country illegally, all payments made to them will STOP (END)!

I am watching the Democrat Party led (because they want Open Borders and existing weak laws) assault on our country by Guatemala, Honduras and El Salvador, whose leaders are doing little to stop this large flow of people, INCLUDING MANY CRIMINALS, from entering Mexico to U.S…..

….In addition to stopping all payments to these countries, which seem to have almost no control over their population, I must, in the strongest of terms, ask Mexico to stop this onslaught – and if unable to do so I will call up the U.S. Military and CLOSE OUR SOUTHERN BORDER!..

….The assault on our country at our Southern Border, including the Criminal elements and DRUGS pouring in, is far more important to me, as President, than Trade or the USMCA. Hopefully Mexico will stop this onslaught at their Northern Border. All Democrats fault for weak laws!