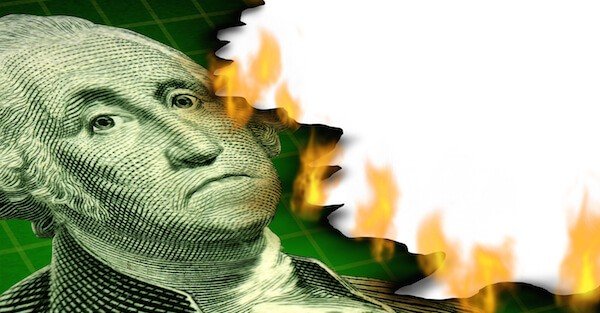 On Friday afternoon, the national debt of the United States hit another major milestone, soaring past $21 trillion for the first time ever.

Clearly that is an enormous number… it’s actually larger than the size of the entire US economy, which is pretty incredible.

But what’s always been the more important story about America’s pile of debt is how rapidly it’s growing.

For example, in the span of a SINGLE DAY, from Thursday to Friday, the national debt grew by $73 BILLION. In a day.

To put that number in context, $73 billion is larger than the size of most major companies like General Motors, Ford, and Southwest Airlines.

And in the month of February alone, the national debt grew by an astounding $215 billion.

Most disturbingly, the national debt has grown by more than $1 TRILLION… just in the last SIX MONTHS.

I’m scratching my head right now wondering– where did they spend all that money? Was there a major economic crisis, wave of bank failures, or severe depression that required massive fiscal stimulus?

Nope. It was just business as usual.

Even better, the economy was supposedly doing totally awesome over the last six months.

And yet, even with all that positivity, the government still managed to rack up an extra trillion dollars in debt.

One important point to make is that debt growth is VASTLY outpacing GDP growth. And this is critical to understand.

Last year, for example, the US economy grew by 2.5% in ‘real’ terms, i.e. stripping out inflation.

Even if you include inflation in the calculation, the size of the US economy increased by 4.4%. Yet the national debt grew by 6%.

Now that might not seem like a big difference. But it is. On a proportional basis, the national debt expanded 36% faster than the US economy (even if you include inflation).

Over the course of several years, that effect compounds into something that’s quite nasty.

Yet over the past ten years, the national debt has grown from $9.4 trillion to over $21 trillion– a growth rate of 123%!

It’s really, really hard to pretend that this is good news.

But that doesn’t stop people from trying.

We’re constantly being told the same old nonsense that “the debt doesn’t matter” because we owe it to ourselves.

And, sure, it’s true that the US government owes a lot of this money to various institutions across America. Like Social Security. Or the US banking system. Or the Federal Reserve.

I find it difficult to see the good news here… as if it would somehow be beneficial to default on (and hence bankrupt) Social Security. Or the US banking system. Or the Federal Reserve.

Doing so would cause the most drastic financial cataclysm ever before seen in the United States.

So… yeah, the debt does matter.

Yet these major milestones are simply yawned off now, as if trillions of dollars in new debt is just par for the course. And that’s pretty sad.

Most people are in one of three camps when it comes to the debt.

#1: They ignore it altogether, and stick their heads in the sand (or up somewhere else).

#3: They view the situation rationally and understand that, maybe, just maybe, at some point in the future, there might possibly be some consequence to arise from the largest debt pile that has ever been accumulated in the history of the world… and they make sensible preparations just in case.

Which group are you in?