The United States just hit a 40-year low in its fertility rate, according to numbers just released by the Centers for Disease Control and Prevention. The 2017 provisional estimate of fertility for the entire U.S. indicates about 3.85 million births in 2017 and a total fertility rate of about 1.76 births per women. These are low numbers: births were as high as 4.31 million in 2007, and the total fertility rate was 2.08 kids back then. The United States has experienced a remarkable slump in fertility over the last several years, as I’ve explained elsewhere. 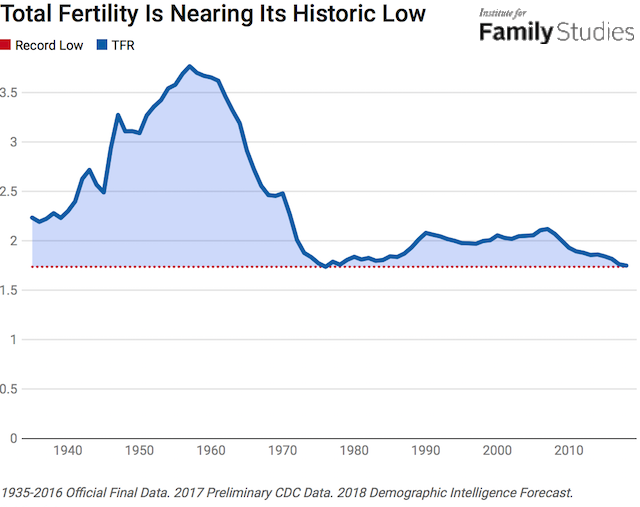 Since 2007, fertility has fallen the most for the youngest women, but in the last year, declines have set in for women in their 30s as well. Fertility declines increasingly seem to be about much more than just postponed fertility, or else these women must be planning to have some very fertile 40s. 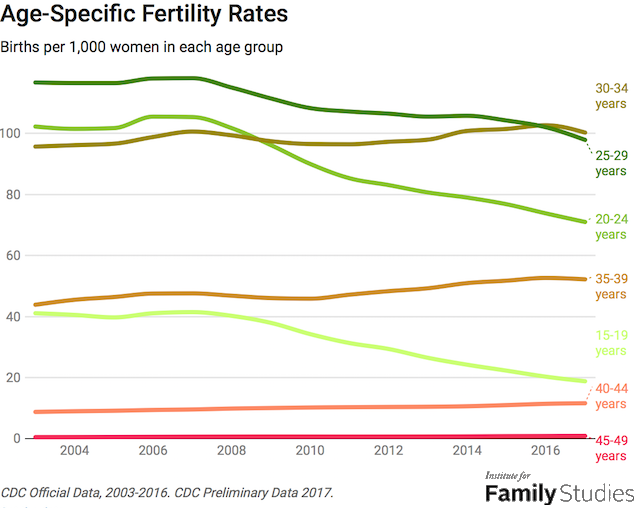 When it comes to discussions about declining fertility, conservatives tend to “get it” right away: not having a next generation, or having a far smaller one, will cause problems down the line. In my experience, progressives tend to be more hesitant: is this a back-door argument to keep women out of the workplace? No; in fact, there’s robust empirical evidence most women want more kids. Is this some science-denying attempt to ignore climate change? Again, no; in fact, no plausible trajectory of U.S. fertility has any appreciable impact on carbon emissions. And, one question I find the most perplexing, is this some underhanded racist argument that white people need to pick up the pace of baby-making to out-compete minorities?

It’s true that some people in the right wing have flirted dangerously close to, and sometimes engaged in, the kind of racialized thinking that has tarred pro-fertility initiatives throughout the 20th century, complaining about “other peoples’ babies,” or quietly suggesting that if African Americans have fewer kids, maybe that’s a good thing.

At the end of the day, though, racists on the right are wrong (and comparatively few in number), but so are the progressives who assume that calls for more babies are racially driven.

That’s because the decline in fertility has been far greater among minorities than among non-Hispanic whites. If we take age-specific birth rates from the peak-fertility year of 2007 and apply them to each age cohort in 2008-2016, the most recent complete data, we can create a counterfactual scenario of how many babies would have been born if age-adjusted fertility rates had not fallen after 2007. From 2008 to 2016, the deficit turns out to be between 4.1 and 4.6 million missing babies: basically, an entire year’s worth or more of childbearing vanished. 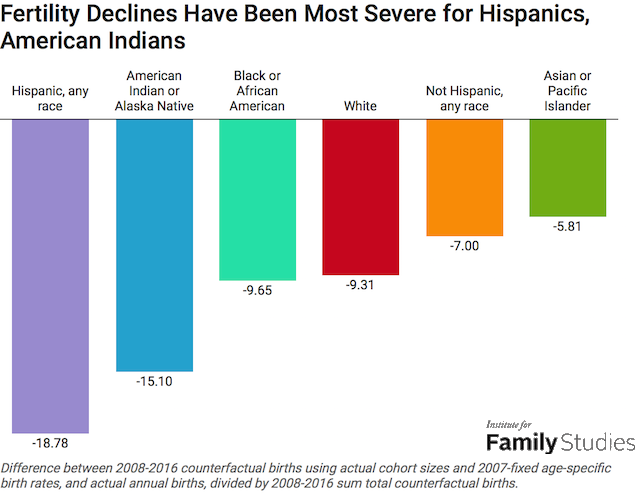 The deficit varies across racial and ethnic groups. American Indians and Alaska Natives have it worst among racial groups, having lost a whopping 15% of expected fertility from 2008 to 2016, or about 83,000 births, with total fertility rates falling from 1.62 births per woman to a shockingly low 1.23. It’s unclear exactly why Native American fertility has fallen so quickly and why it is so low, but they are indisputably the hardest-hit race in the fertility declines of the last 10 years.

Then come African Americans, who are missing 9.6% of expected births, or about 700,000 births, which is only slightly more severe than whites, who are missing 9.3%, or about 3.2 million births. Black fertility declined from 2.15 births per woman to 1.89, while white fertility fell from 2.14 to 1.82. Asians experienced a less severe decline, but their fertility was somewhat lower to start with.