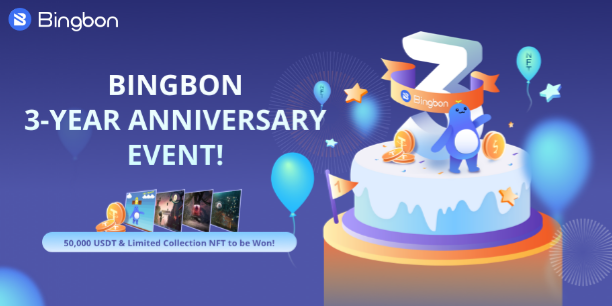 May 20, 2021 marked a major milestone for social trading crypto exchange Bingbon as they celebrated their 3rd anniversary.

To reciprocate the support from its community, Bingbon launched a special Profit Ranking Competition with a total prize pool of nearly $200,000. Prizes of this lucrative trading contest will be distributed in USDT and NFTs among the top traders in terms of profit rankings and popularity.

Singapore-based Bingbon said it will mint 500 NFTs for the event to provide another layer of earning potential for all participants who perform well over this multi-stage event.

From May 20 through June 17, all Bingbon users who have a minimum account balance of 30 USDT are eligible for registration in the contest that will be split into two rounds.

The preliminary round of Profit Ranking Competition consists of three phases, each lasting one week. The top 30 contestants with the most profit in the first phase will automatically earn a spot in the final round. Additionally, the top 60 candidates in the second phase will be rewarded with non-fungible tokens.

Leading up to the final round, which kicks off after the third phase of the preliminary round, the top 5 candidates will win between 500 and 5,000 USDT depending on their ranking.

Additionally, there is a popularity contest in the preliminary round that will qualify additional 100 contenders to the final race. Users can vote once per day for the favorite candidates they wish to boost their ranking to participate in the last lap.

While the 100 candidates selected by the popularity contest will automatically advance to the final round, the top 170 skillful traders will be rewarded with NFTs prizes. Winners can keep their tokens or sell them back to Bingbon for Tether.

A separate award for the three most popular teams

Moving fast to the final round, the contest starts to heat up as traders will join into teams combining their individual popularity scores. Candidates will compete for the grand prize of 50,000 USDT granted for the first-place winner. The next top traders by profit will also earn Tether prizes, with the runner-up and third place each taking $20,000, while the fourth place will get $10,000. Places five to ten will earn $1,000 each.

Meanwhile, the most popular team will split a $30,000 prize once the popularity competition ends, with second and third place sharing $10,000 and $5,000 respectively.

“In the interest of fairness, awards will be equally distributed among team members. Please be advised that the preliminary round kicks off on May 20th and ends on June 10th while the final round will begin on the ending date of the preliminary round and continues until June 17th,” Bingbon further explains.

Established in 2018, Bingbon is the world’s first cryptocurrency exchange with a copy trading function designed to improve accessibility and magnify users’ potential. The popular platform, which is licensed to operate in the U.S. and the European Union, has successfully matured on such short notice from a mere concept into one of the fastest-growing crypto powerhouses in the world.

Like eToro disrupted investing by bringing social money management to traditional assets, Bingbon allows everyone, even without experience in trading, to mirror the orders of professional traders and earn money with them.