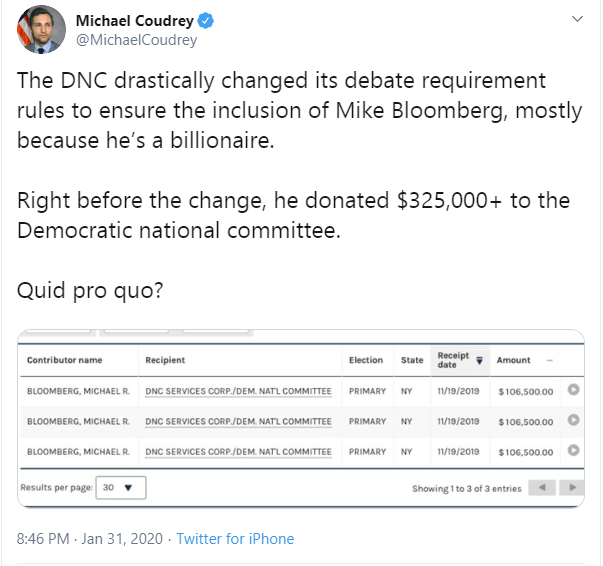 COUNCIL BLUFFS, Iowa — The Democratic National Committee has opened the door to allowing former Mayor Michael R. Bloomberg of New York to participate in the presidential debate it will sponsor in Nevada next month, a change from its practice that demanded candidates demonstrate grass-roots fund-raising support.
The D.N.C. announced Friday that in order to participate in the debate, set for Feb. 19 in Las Vegas, a candidate must win at least a single delegate in either the Iowa caucuses or the New Hampshire primary or meet polling requirements.
It has eliminated the requirement that candidates must have received donations from hundreds of thousands of individuals. Mr. Bloomberg, a multibillionaire, is running a self-funded campaign and is not soliciting donations.
The changes, which represent the most significant tightening of debate requirements this cycle, set off a fresh and pointed round of criticism at a critical moment in the race, as several campaigns braced for the reality check that the Iowa caucuses will provide. And the edict from party officials, which some saw as a concession to Mr. Bloomberg, quickly reignited concerns among those who believe the D.N.C.’s shifting rules for the debates privilege some candidates and campaigns over others.