A few weeks ago, a real estate agent told me about his client. Relatively wealthy older dude, closed on not one but two townhouses he plans on flipping. After some questions regarding who financed such a deal, he explains it was a private lender. Right before adding, “don’t worry, it’s not like in the US. This guy has good credit, he just couldn’t get enough money from his bank.”

I realized that people aren’t lying when they say Canadian real estate is nothing like the US in 2006. Canadians just don’t understand what happened during the US subprime crisis. They also don’t really understand subprime lending is alive and well in Canada, we just use different names.

First, a quick lesson on subprime. The S-word is a dirty word in Canada, so there’s little discussion about what it means. Most people think “broke ass borrower” when they hear the term, but that’s not always the case. There’s subprime borrowers and subprime loans.

Subprime loans are any loans that are below prime, as in the typical lending criteria isn’t met. The part that’s poorly understood is a borrower, a loan, or any combination of those can be subprime. A borrower with excellent credit, might want a subprime loan. This happens more often than you think, and is usually because a bank won’t lend as much money as needed. No one thinks of a family in a nice neighborhood with a private loan to buy their fourth or fifth condo as subprime, but they are.

Don’t worry, it’s not just average people that don’t understand this. There’s still a lot of confusion about the issue in the finance community around the US subprime crisis. Most people knew subprime lenders blew up, and naturally blamed poor people and immigrants with low credit scores, as is the way. However, new research shows that the sudden rise in foreclosures during this period were due almost exclusively to investors with good credit. Good credit, but using subprime lenders.

Subprime borrowers defaulted at the same rate they always did. Investors using subprime lenders jumped by a “factor of 10.” When prime borrowers couldn’t get the loans they wanted, they went to the lenders that would. So yes, it was a subprime lending problem – but not due to poor people. These were mostly middle class investors. Whole textbooks will be written on the topic, but what you need to remember today is not all subprime loans are to people with bad credit. However, all have insufficient credit for the size of loan they’re looking to borrow.

Canadian subprime lending is often done through private lenders, you access through a mortgage broker. Good brokers always start at the best lender, that usually has lower rates than your bank. When you don’t qualify for these, they move up the chain. If your credit  profile won’t even work at “bad credit” lenders like HomeTrust, they’ll suggest a private lenders. Bad credit, no credit, no problem. There’s usually a private lender that’s willing to make a deal.

Sounds great, so why doesn’t everyone use private lenders? They aren’t taking bank rejects as a charitable cause, they’re doing so because they can charge a risk premium. Despite being off of record low interest rates, these lenders charge upwards of 8% and we’ve seen mortgages well into the 20s. The broker also gets 1%-3% of the loan, so there’s little reservation suggesting them. If you can do math, you’re probably wondering how people make money on these deals? They can only do so if they hold it for a short period of time. If you’re bad at math, you may be one of these borrowers not realizing you’re only paying interest on your loan, and not reducing your debt. Regardless, this is where Canada’s subprime borrowers lurk.

READ  In Canada, only 166 deaths with covid were outside nursing homes.

You know that commercial from the Big Six bank, where the borrower goes into a bank and they tell them they’re richer than they think? Well, according to the credit rating TransUnion, over 1 in 10 Canadians probably wouldn’t get that reaction. Transunion estimates that 11.9% of the 28.4 million Canadian consumers with credit profiles are subprime. That’s roughly 3.4 million Canadians, but we can’t be sure these are the borrowers. What we do know is private lenders became extremely popular in Ontario recently.

Bank of Canada (BoC) numbers show that despite a decline in sales, private lending is growing in Ontario. Mortgage originations at private lenders in the Q1 2018 rose to $2.09 billion in Ontario, a 2.95% increase from last year. That should raise a few flags, since dollar volume of real estate sales are down 37.64% during the same period.

The market share of private lending went from 5.71% of originations in Q1 2017, to 7.87% in Q1 2018. While originations at other channels are dropping, private lender originations are growing. The province either has a lot of people with bad credit jumping in, or a lot of over-leveraged speculators. Neither should inspire market confidence. 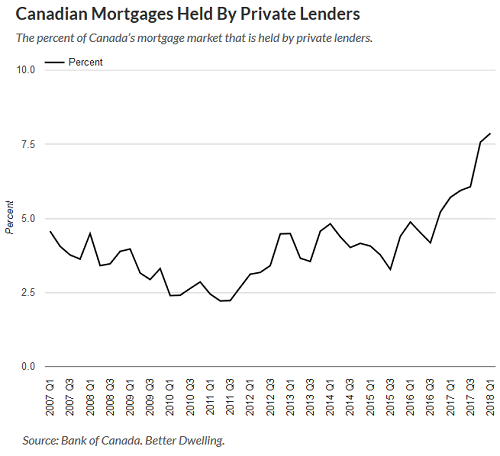 As a result of apathy (or incompetence), the government doesn’t track subprime lending. Shocker, right? However, if you wanted to see how it contributes to the market look no further than Toronto’s “healthy” condo market. We don’t have the number of subprime borrowers in that market, but we do have the interest rates being paid. Since we know that unusually high interest is charged by private lenders, we at least have a proxy to help us understand condo buyers.

That’s a lot of units with unusually high interest rates buying condos – not a great sign of buyer quality. These buyers are likely waiting to flip at the first sign of buying weakness, or don’t realize how difficult it’s going to be to make a profit at that rate. 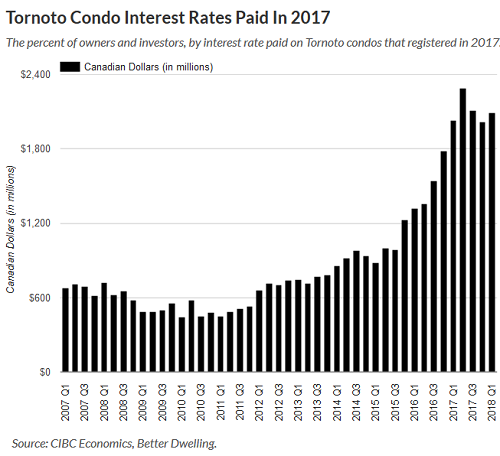 The government doesn’t track subprime borrowing, but the signs are there. More middle class speculators or broke-ass buyers are going to private lenders. Many of these buyers likely think they’re the only people doing this. The market appears “healthy,” because not a lot of these people understand that a lot of other people are doing this. As rates rise, price growth tapers, and sales decline – this becomes what equity traders call a crowded trade. If you’re unclear what a crowded trade is, there was this thing called the US subprime credit crisis. It’s pretty similar to what’s happening right now. By Stephen Punwasi, Better Dwelling