Big Brother will soon be able to stop a person from driving their car if it detects any alcohol in their breath.
The Automotive Coalition for Traffic Safety, Inc.(ACTS) and the Driver Alcohol Detection System for Safety (DADSS) program have created an open source “in-air” alcohol detection system for new vehicles.

“The new technology is the result of extensive research, development and testing by the DADSS Program, which is a public–private partnership between ACTS, which represents the world’s leading automakers, and the U.S. Department of Transportation’s National Highway Traffic Safety Administration.”

As the press release states “in-air” alcohol detection systems can be installed in commercial vehicles by the end of 2021 and in most new cars by 2024.

“Unlike existing breathalyzers or interlocks, the DADSS technology can be seamlessly integrated into vehicles so there is no physical hardware in the vehicle cabin. A consumer version is still under development and is expected by 2024.”

Since 2008, a federal/corporate research collaboration representing 17 automobile manufacturers have been working together to put touch-based and breath-based alcohol sensors in new cars everywhere. (To find out more about DADDS click here.)

“The Driver Alcohol Detection System for Safety, or DADSS, program is a collaborative research partnership between ACTS, representing 17 automobile manufacturers, and the NHTSA to assess and develop alcohol-detection technologies to prevent vehicles from being driven when a driver’s blood alcohol concentration (BAC) BAC exceeds the legal limit of 0.08 percent.”

DADDS will automatically test the breath’s of drivers and passengers as soon as they enter a vehicle.

“To determine how best to install this system into new vehicles, extensive research is being undertaken to fully understand the process of the breath stream after exhalation and the breath’s distribution in the cabin both from drivers and passengers.” 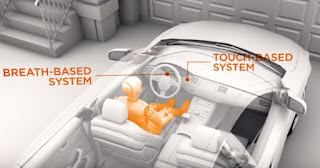 In 2024, new cars will also be equipped with alcohol-sensing start buttons that will prevent a car from moving if it detects alcohol.

DADDS reveals how alcohol-sensing start buttons measure a driver’s capillaries to determine how much alcohol is in their body.

“The touch system analyzes alcohol found beneath the driver’s skin’s surface (or more specifically, the blood alcohol content detected in the capillaries). Measurement begins by shining an infrared light on the driver’s skin, similar to a low power flashlight, which moves into the tissue. A portion of the light is reflected back to the skin’s surface, where it is collected by the touch pad. This light contains information on the skin’s unique chemical properties, including the concentration of alcohol.”

“The next-generation system being developed for widespread use in consumer vehicles is designed to be fully passive and will be able to measure specific alcohol concentrations up to 0.08% — the legal limit in most states — and above. It will not require a directed breath or other action, as the driver breathes normally into sensors outfitted in the steering column or side door trim. The system is being designed to take an accurate reading in a matter of seconds and will be able to tell the difference between a driver and any passengers.”

Installing “in-air” alcohol sensors in every new car is far from being ‘an exciting moment in motor vehicle safety history’ as DADDS claims. Instead, it will give law enforcement another tool to invade everyone’s privacy as soon as they enter a vehicle.

See also  Pay Close Attention to Everyone Who's Going to Bat for Shapiro and the Daily Wire
Trending: Views: 52