From New York To L.A., Hollywood to the NBA and all points in between, China has been buying up millions of dollars worth of deceptive advertising disguised as news and for some publications, that China revenue might very well be the difference between staying in business vs going under.

Oh, and for those really paying attention, note how those ad buys escalated big time during the last 2016 election cycle and now it’s escalating yet again as we near the 2020 election.

This is REAL foreign interference and it’s something the far-left media and Democrats don’t want anyone to know about.

Via The Washington Free Beacon:

China routinely broke federal law by not disclosing how much it spent to publish regime propaganda in the New York Times, the Washington Post, and other newspapers, an expert review of foreign agent registration filings concluded.

China Daily, an official mouthpiece of the Chinese Communist Party, has published hundreds of propaganda articles designed to look like ordinary news stories in some of America’s most influential newspapers. While foreign agents may place ads in the United States, the propaganda outlet has repeatedly violated the Foreign Agent Registration Act (FARA) by failing to provide full disclosures about its purchases.

The Washington Free Beacon reviewed all of the physical copies of China Daily‘s ads filed with the DOJ, as well as online ads the propaganda outlet did not submit to the department. China Daily has run more than 700 online ads designed to look like news articles and purchased 500 print pages in six American newspapers over the last seven years. These propaganda articles frame state oppression in Xinjiang, Tibet, and Hong Kong in a positive light and run alongside actual news stories produced by reporters at the Post, Times, Wall Street Journal, and other outlets.

Rep. Jim Banks (R., Ind.), a member of the House Armed Services Committee, has frequently criticized China Daily, arguing that the newspaper should not be distributed to the offices of members of Congress. He said American newspapers traded credibility for ad revenue.

“These outlets claim to support democracy, but they’ve participated in a cover-up for an ongoing communist-run genocide,” Banks said. “It’s disgusting.”

“I’m sure the Chinese government wouldn’t have invested so much money into this effort in almost every major newspaper if they didn’t think that they were getting some return,” Zack Cooper, a research fellow at the American Enterprise Institute, told the Free Beacon.

China Daily uses its large war chest to purchase hundreds of ads in the print and online versions of the Times, Post, and Journal. Ad spending peaked in 2016, when it took out ads in more than 140 pages in American outlets. 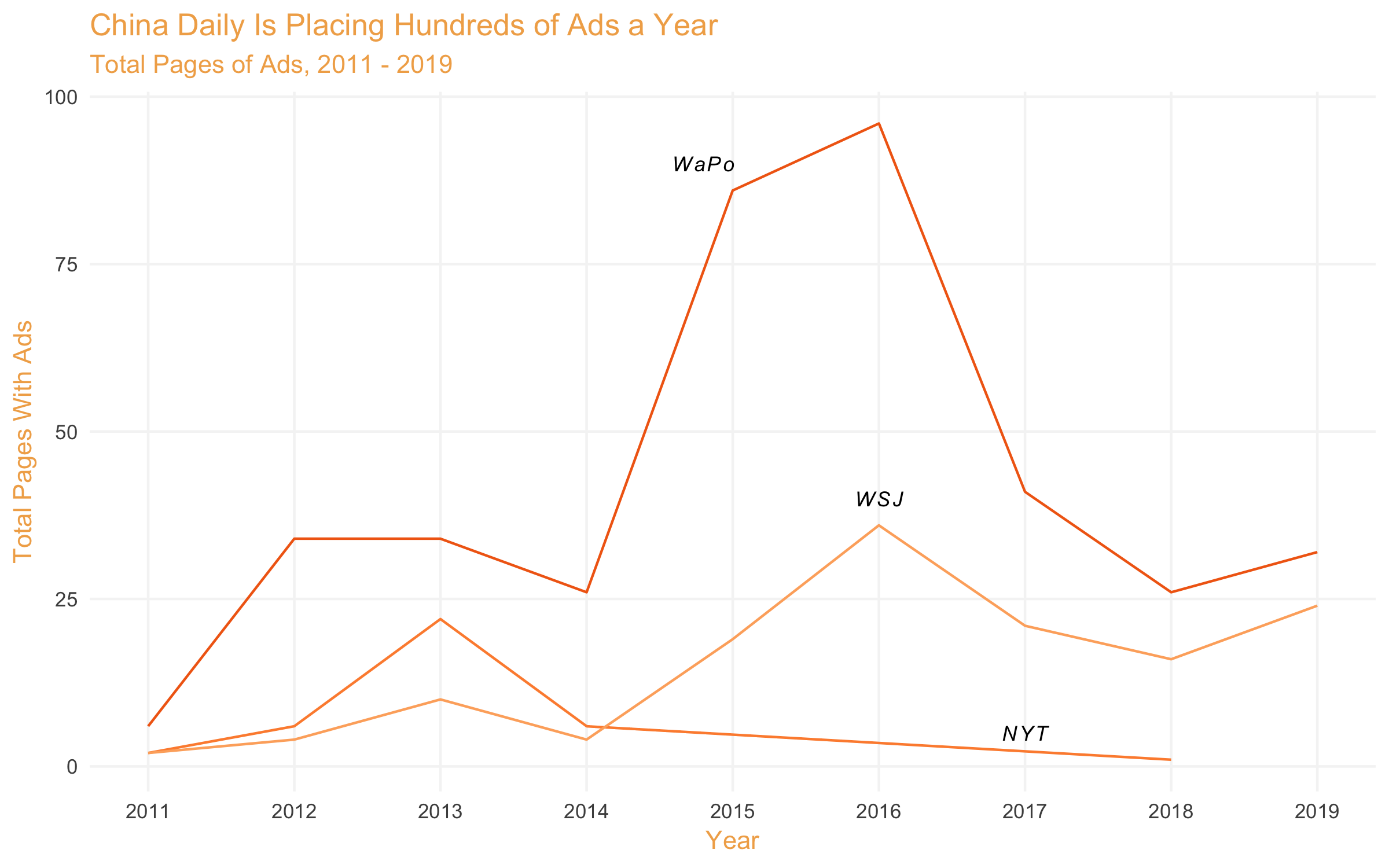 NOTE: Nearly every Democrat candidate for president has defended China against President Trump. The information above appears to make the reason why very clear. They believe China is working to defeat the president as much as they are which is just another way of saying that China is trying to purchase the U.S. presidency.

All of this “Russia-Russia-Russia” talk is likely deflection from the real threat –  China. Especially when you remember that China’s economy is nearly 300% greater than Russia’s.

Shame on the media and shame on the Democrats for allowing China to so easily buy its way into America’s political process. And thank you to President Trump for finally fighting back against this intrusion. Hopefully more politicians will learn from his example.