What will finally pull the rug out from under the dollar’s hegemony? The euro? The Chinese yuan? Cryptocurrencies? The Greek drachma? Whatever it will be, and however fervently the death-of-the-dollar folks might wish for it, it’s not happening at the moment, according to the most recent data.

The IMF just released its report, Currency Composition of Official Foreign Exchange Reserves (COFER) for the fourth quarter 2017. It should be said that the IMF is very economical with what it discloses. The COFER data for the individual countries – the total level of their reserve currencies and what currencies they hold – is “strictly confidential.” But we get to look at the global allocation by currency.

Dollar-denominated assets among foreign exchange reserves rose 14% year-over-year in Q4 to $6.28 trillion, and are up 42% from Q4 2014. There is no indication that global central banks have lost interest in the dollar; on the contrary:

Over the decades, there have been some efforts to topple the dollar’s hegemony as a global reserve currency, which it has maintained since World War II. The creation of the euro was the most successful such effort. Back in the day, the euro was supposed to reach “parity” with the dollar on the hegemony scale. And it edged up for a while until the euro debt crisis derailed those dreams.

And now there’s the ballyhooed Chinese yuan. Effective October 1, 2016, the IMF added it to its currency basket, the Special Drawing Rights (SDR). This anointed the yuan as a global reserve currency.

But not all central banks disclose to the IMF how their foreign exchange reserves are allocated. In Q4, the allocation of 12.3% of the reserves hadn’t been disclosed. These “unallocated reserves” have been plunging. Back in Q4 2014, they still accounted for 41% of total reserves. They’re plunging because more central banks report to the IMF their allocation of foreign exchange reserves, and the COFER data is getting more detailed. 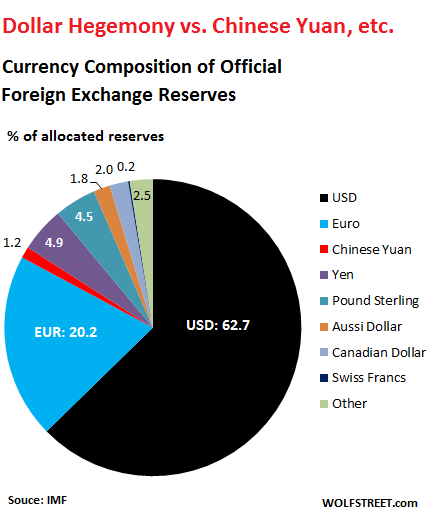 Disappointingly for many folks, the Chinese yuan – the thin red sliver in the pie chart above — didn’t exactly soar since its inclusion in the SDR basket. Its share ticked up by a minuscule amount to a minuscule share of 1.2% of allocated foreign exchange reserves in Q4. In other words, central banks seem to lack a certain eagerness, if you will, to hold yuan-denominated assets.

The Swiss franc, with a share of 0.2%, is the black hair-thin line in the pie chart.

The chart below shows the percent share of various reserve currencies since 2014. The black line with the red dots at the top is the hegemonic US dollar, whose share has edged down a tiny bit. The euro (blue line) is stable at around 20%. The dollar and euro combined accounted for 82.9% of the allocated foreign exchange reserves in Q4 2017. Each of the rest of the currencies was an inconsequential also-ran. As a memo entry and not part of the percentages, I added the descending purple line to show the rapid disappearance of “unallocated reserves.” The Chinese yuan is the bright red line at the very bottom, just above the Swiss franc: 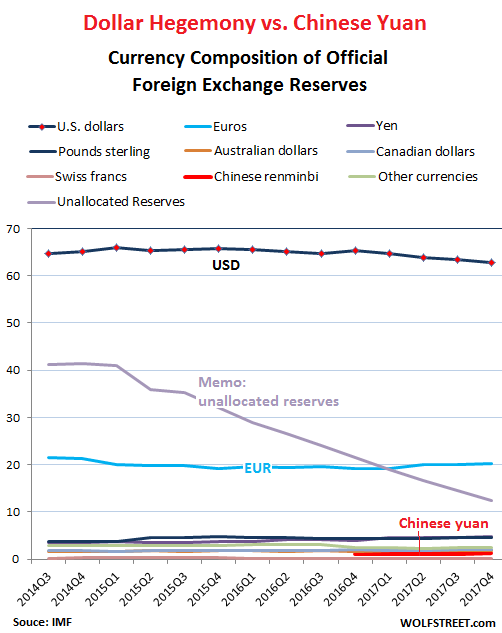 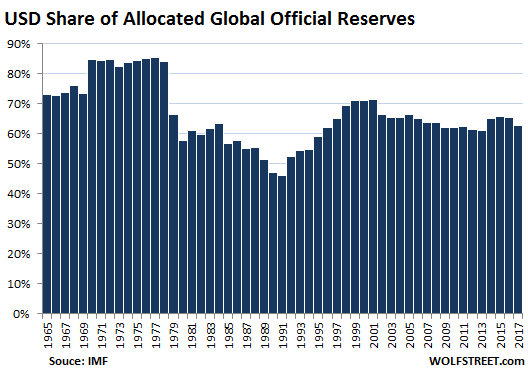 The dollar’s low point was in 1991 with a share of 46%. Starting in 2001, the euro, which had replaced the Deutsche mark and the currencies of four other Eurozone member states as reserve currencies – now expanded to 19 – made a visible dent into the dollar’s hegemony. But the Financial Crisis did not.

And the Chinese yuan, on which all recent hopes had rested that it could pull the rug out from under the dollar, well, it’s barely above the level of a rounding error. In other words, folks who’ve been eagerly waiting for the death of the dollar or similar fiascos will have to learn how to be very patient.