The U.S. government is borrowing $3 trillion in the second quarter this year, an eye-popping number with unknown implications for the future of the economy. With so much government spending in response to the coronavirus, we started to wonder, which countries actually own the most U.S. debt? 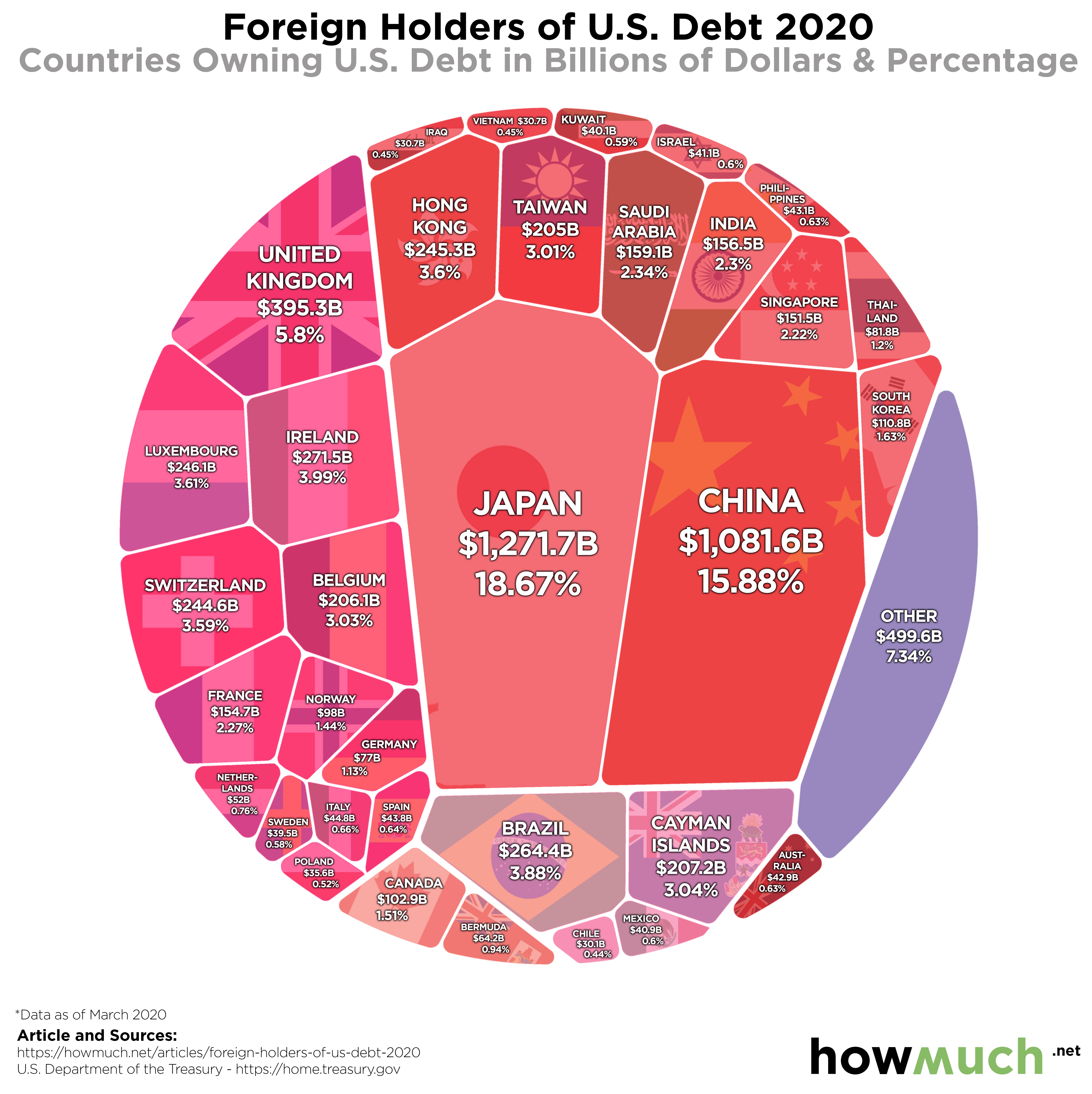 We collected the figures for our visualization from the U.S. Department of the Treasury as of March 2020, the latest month for complete numbers. We wanted to see which countries hold the most debt both in overall terms and a percentage of the whole. We also grouped countries from the same continents together. In turns out, there are two heavyweights in Japan and China, followed by dozens of other countries holding much smaller levels of U.S. debt.

The most obvious takeaway is that Japan and China both account for the largest share of U.S. debt in our visual. According to the month-by-month figures from the Treasury, Japan surpassed China as the largest foreign holder of American debt in May 2019. Taken together, Japan and China account for $2,353.3B or 34.55% of American debt owned by foreign countries. In other words, two countries alone control more than a third of the foreign market for American debt.

But there are also a variety of other interesting nuggets about foreign holders of U.S. debt in our visualization. A number of European countries own a lot of debt, including the U.K. ($395.3B), Ireland ($271.5B) and Luxembourg ($246.1B). These countries don’t inspire the same kind of doom and gloom in the American media imagination as Japan and China. The Cayman Islands also deserve special mention because they own a surprising amount, $207.2B or 3.04% of all foreign holders. Perhaps that is due to American investors holding assets offshore but still looking for the security of government bonds.

Foreign holders of U.S. debt will have no shortage of opportunities to buy more of it. The U.S. national debt has been on an upward trajectory for several years. In fact, the recent coronavirus spending will up the deficit this year to $3.7T, pushing the national debt to new heights. There’s one big and important caveat to keep in mind when considering who owns the U.S. debt. The grand total amount of debt in our visualization only comes out to $6.8T. But smart observers know that the total U.S. debt is about $25.7T. What accounts for the difference? American investors, the Federal Reserve and other parts of the U.S. government actually own about 70% of the entire national debt. Foreign countries would need to buy trillions of more in U.S. debt before they’d control even half of the total.

Do you think that all the U.S. government’s spending will eventually come back to haunt the economy in the future? Let us know in the comments.