Service sector growth slowed sharply in October, confirming the US trade war is hitting the Chinese economy hard, and sooner than most expected

The Chinese service sector continued to grow in October, but at a much slower pace than in the previous month, hitting a 13-month low, data from financial news outlet Caixin showed.

The services purchasing managers’ index (PMI), compiled by Markit and published by Caixin, fell to 50.8 in October, well below the 52.8 level forecast by analysts in a Bloomberg survey and the September reading of 53.1.

The index level of 50 is the dividing point between expansion and contraction in the sector.

The new figure for the first month of the fourth quarter is further evidence that the trade war with the United States is having a major negative effect on Chinese growth, and the deterioration is happening faster than most observers and the Chinese government previously expected.

The Caixin result follows the official PMI data released on Wednesday that showed manufacturing sentiment posted a larger-than-expected drop to 50.2 in October from 50.8 in September – meaning factory activity continued to expand but at a much slower pace.

HONG KONG — Kelly Chai, a white-collar worker at a technology company in Beijing, hasn’t spent any money on luxuries for a while.

Once upon a time, Chai used to buy lower-end Louis Vuitton products, but she now refrains from spending even $400 on a Coach handbag. “I could not make up my mind. I feel it’s not necessary,” said the mother of a 7-year-old, adding that her money is better spent elsewhere.

For years, companies selling luxury goods have counted on China for growth. They relied on Chinese consumers for a third of their global sales. But the momentum appears to be slowing as some in the middle class cut back to cope with swelling bills and shrinking wealth.

For Chai, $2,300 of the monthly family income is spent paying down a mortgage for an apartment near a good primary school so that her son can attend it. Fees for his school, private tutoring and extracurricular activities cost another fortune.

The cash drain facing households like Chai’s is prompting economists to warn of a further slide in spending, as luxuries and high-value items are an early indicator of consumer caution when a country faces a shaky economic future.

Hong Kong, where mainland shoppers converge in search of duty-free luxury goods, is also feeling the heat. The year-on-year sales growth for jewelry, watches and clocks, and valuable gifts slowed to 2.2% in September from 20.8% in the previous month, the statistics department announced on Thursday. 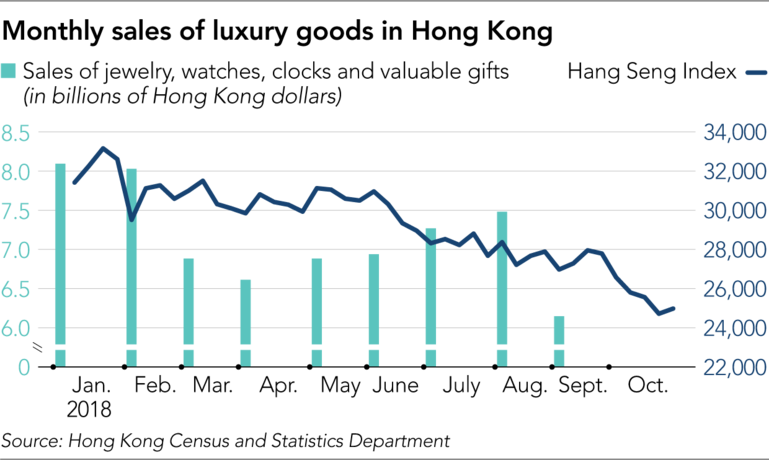 See also  Police in China Breaking Into Family's Home And Tryi To Evict Them To A Quarantine Camp. The Husband Takes Out A Knife

Borrowing costs in dollars for China’s high-yield issuers, most of whom are property developers, almost doubled this year to 11.2 percent, the highest in about four years, ICE BofAML indexes show. To make things worse, the sector faces a record $18 billion bond maturities in both onshore and offshore markets in the first quarter of 2019. That number is expected to double if investors demand early repayment on some of these notes, according to Bloomberg-compiled data.

China’s property developers have been caught in the storm of a funding crunch facing the nation’s private sector due to a two-year long clampdown on shadow financing. Although authorities have rolled out measures to ease funding for non-state firms, the existing property control policies won’t loosen, the official Xinhua New Agency said in a commentary last week. At least four property-related firms defaulted on notes this year.

“Funding conditions may not improve until sentiment changes,” said Clement Chong, a Singapore-based senior credit analyst at NN Investment Partners Ltd. “Defaults are happening more frequently onshore. I believe some developers will be caught up in this if funding cost keeps rising.”

China’s economic partners are caught up in an endless circle of promises. t.co/4ZCoIrhTK2

China's fixed asset investment is at its lowest levels since 2003. $FXI $USDCNY pic.twitter.com/CobGq0HpCB

See also  Cold War Watch: “If you’re interested in geopolitics and US-China competition, this is absolutely THE video you need to watch today”
Trending: Views: 11