(Keep in mind that China M1 YoY is a key leading indicator for Chinese + macro trends).

Thus: still weakness ahead (for now)

Well, total social financing growth has been breaking records this year, and H1 saw the debt-to-gdp ratio rise by 5.8 percentage points to around 250%. China also cannot repeat the “shadow banking binge” of 2015/2016, as that would surely push the economy over the edge.

And, let’s look at the simple numbers.

Something’s got to give relatively soon.

Enacting a full-blown debt-binge would crush the economy eventually with no efficient options to stimulate left. I don’t think that the CCP leaders are so stupid. 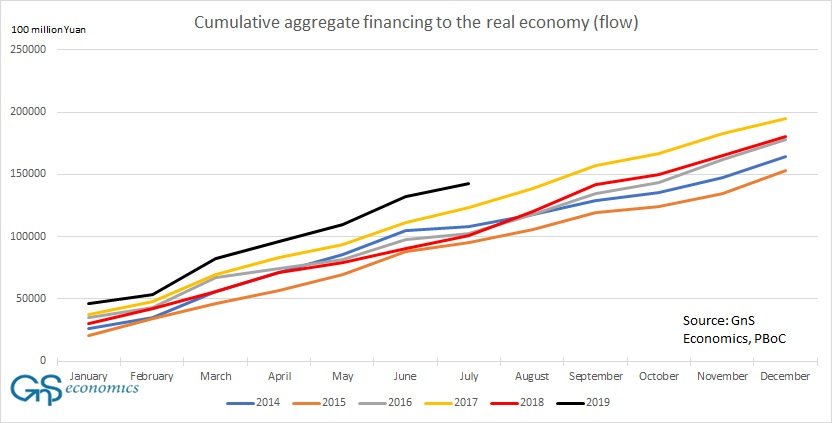 China Is Throwing Open Its Market Door. Be Wary

Global funds no longer need quotas to buy Chinese stocks and bonds, the State Administration of Foreign Exchange said in a statement Tuesday. That removes a hurdle to foreign investment that’s been in place for almost two decades, since the nation first allowed access to its capital markets.

Scrapping the quota is less a confident liberalization by a maturing economy and financial system than an overt admission that the country needs money. China has been edging dangerously close to twin deficits in its fiscal and current accounts. It needs as much foreign capital as it can get – even in the form of hot portfolio flows – to keep control over the balance of payments and avoid a further buildup of debt.

Contrary to stereotypes, China is no longer a frugal nation that sells a lot abroad and buys little in return. The country’s middle class is now traveling and using credit cards overseas. Trade, meanwhile, is undergoing a sharp slowdown, with exports to the U.S. slumping 16% from a year earlier in August amid an escalating trade war.

This thirst for overseas funds explains why China has been opening its financial services industry, allowing global investment banks to take majority control of their local brokerage joint ventures after years of resistance.