China already using our MSM to push their propaganda in the U.S.

And look at the institutions and their allies.

No coincidences these two stalwarts of “journalism” are sworn enemies of the President and his administration and policies.

China routinely broke federal law by not disclosing how much it spent to publish regime propaganda in the New York Times, the Washington Post, and other newspapers, an expert review of foreign agent registration filings concluded.

China Daily, an official mouthpiece of the Chinese Communist Party, has published hundreds of propaganda articles designed to look like ordinary news stories in some of America’s most influential newspapers. While foreign agents may place ads in the United States, the propaganda outlet has repeatedly violated the Foreign Agent Registration Act (FARA) by failing to provide full disclosures about its purchases.

China Daily has published propaganda in mainstream outlets for decades, but did not disclose its purchases of space in American newspapers to the Department of Justice until 2012. Even after it began acknowledging its relationship with the papers, the regime mouthpiece continued to violate federal disclosure requirements. China Daily has failed to provide breakdowns of spending activities and withheld copies of online ads, among other omissions that violate federal law, according to experts who reviewed years of its FARA filings.

The Washington Free Beacon reviewed all of the physical copies of China Daily‘s ads filed with the DOJ, as well as online ads the propaganda outlet did not submit to the department. China Daily has run more than 700 online ads designed to look like news articles and purchased 500 print pages in six American newspapers over the last seven years. These propaganda articles frame state oppression in Xinjiang, Tibet, and Hong Kong in a positive light and run alongside actual news stories produced by reporters at the Post, Times, Wall Street Journal, and other outlets.

Rep. Jim Banks (R., Ind.), a member of the House Armed Services Committee, has frequently criticized China Daily, arguing that the newspaper should not be distributed to the offices of members of Congress. He said American newspapers traded credibility for ad revenue.

“These outlets claim to support democracy, but they’ve participated in a cover-up for an ongoing communist-run genocide,” Banks said. “It’s disgusting.” 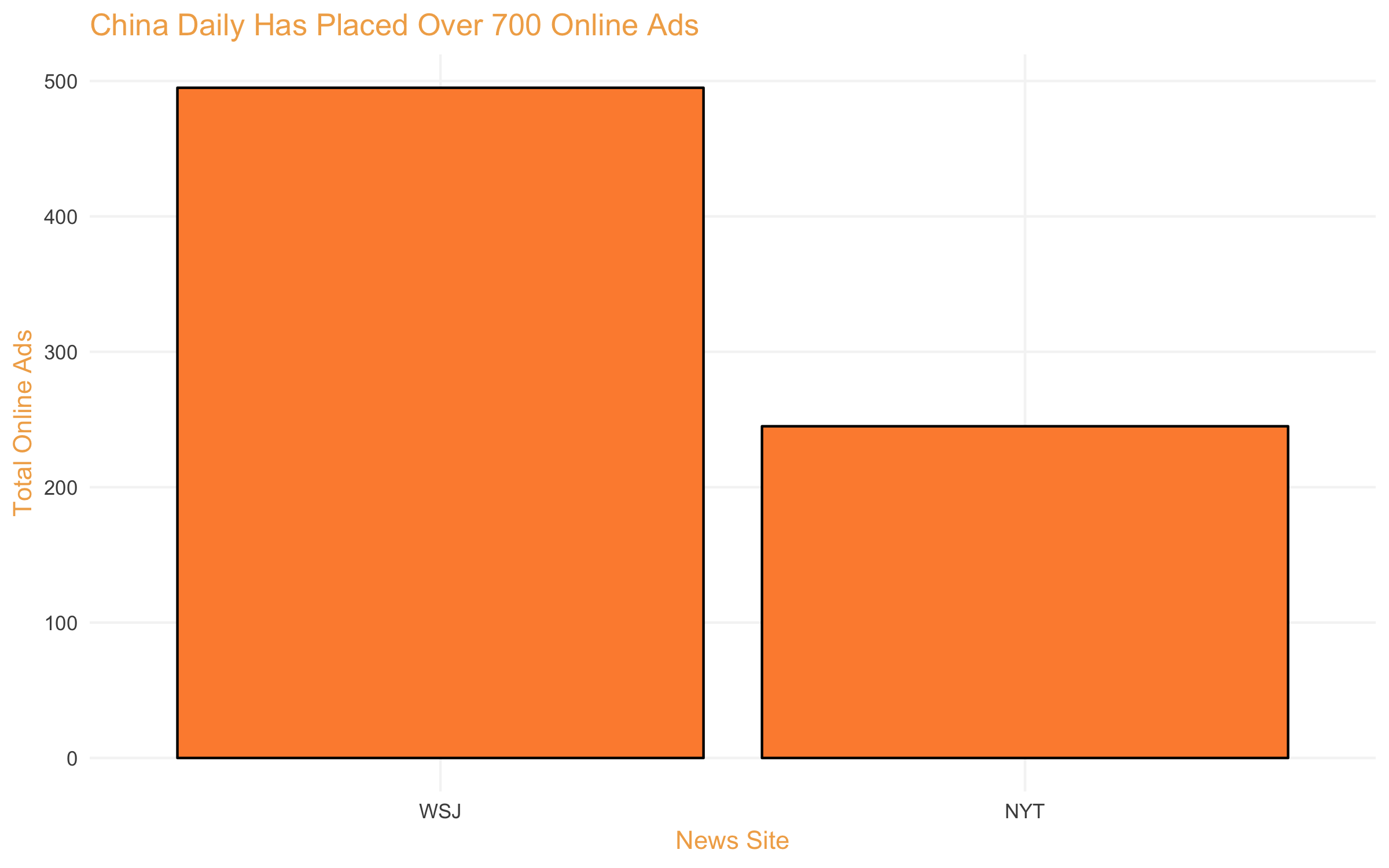 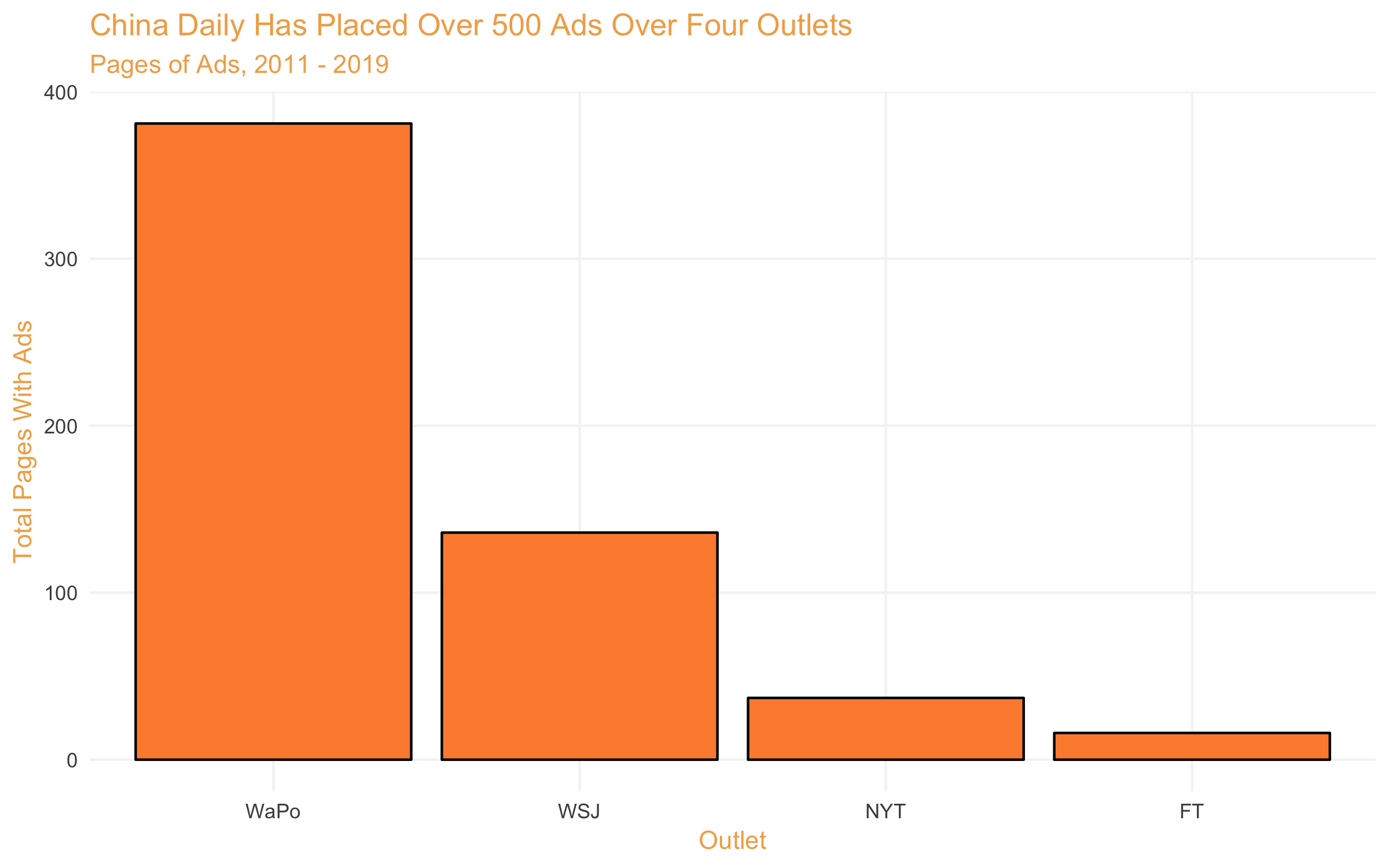 A spokesman for the Post told the Free Beacon that the newspaper has run China Daily ads for “more than 30 years.” By 2012, the regime mouthpiece’s operation was running dozens of ads per year mimicking real articles in major outlets under the banner of “China Watch”—a self-proclaimed “high-end think tank platform” backed by China Daily.

Federal law requires foreign agents to report and provide copies of all propaganda that is “disseminated or circulated among two or more persons” in the United States. Ben Freeman, director of the Foreign Influence Transparency Initiative at the Center for International Policy, said China Daily‘s ad inserts are subject to those requirements.

“Clearly, an ad that’s in the Washington Post, the Wall Street Journal, or any big media outlet is going to be distributed to two or more people,” Freeman said.