Two weeks into 2019, five Chinese companies are already likely to default on 3.5 billion yuan (US$446.25 million) worth of debt, after a record US$17 billion default wave took the country by storm in 2018 amid a worsening economic slowdown and soaring refinancing costs facing the cash-starved private sector.

Beijing Kang Dexin Composite Material, a hi-tech material firm that supplies optical film products to Apple and carbon fibre materials to Mercedes-Benz, tumbled by its maximum-allowed 10 per cent on Tuesday to a record low of 6.46 yuan on the Shenzhen Stock Exchange. Its market cap has plummeted 58 per cent in the past two months to 23 billion yuan from 54 billion yuan.

Tuesday’s plunge came after the firm announced it’s likely to default on the payments of two corporate bonds worth a combined 1.56 billion yuan. One is due on Tuesday, with an amount of 1.04 billion yuan, while the other will expire next Monday.

“The company has run into temporary cash flow problems since the fourth quarter, due to macro financing difficulties and slow cash collection of sales payments,” Kang Dexin said Tuesday on the Shenzhen exchange’s online interaction platform.

Moody’s Investors Service downgraded Kang Dexin’s ratings twice in 2018, citing concerns for the company’s worsening liquidity conditions, soaring refinancing costs, and elevated ratios of shares pledged as collateral for loans, which will increase the risks of a stock plunge when borrowers run into trouble. Two largest shareholders of Kang Dexin, which together hold a third of the company, have pledged more than 98 per cent of their respective shares as collateral, public information showed.

Kang Dexin is not the only firm facing a cash crisis.

Since the start of this year, four Chinese companies have failed to repay corporate bonds worth a total of 2 billion yuan, three of which are privately-owned companies, according to data from Wind Financial.

The intensive wave of bond failures looks like a continuation of a default storm in 2018.

Last year, defaults on corporate bonds soared nearly fourfold from 2017 to an all-time high of 120 billion yuan. The value also exceeded the combined amount of the previous four years, as defaulted corporate bonds totalled 86 billion yuan from 2014 to 2017. 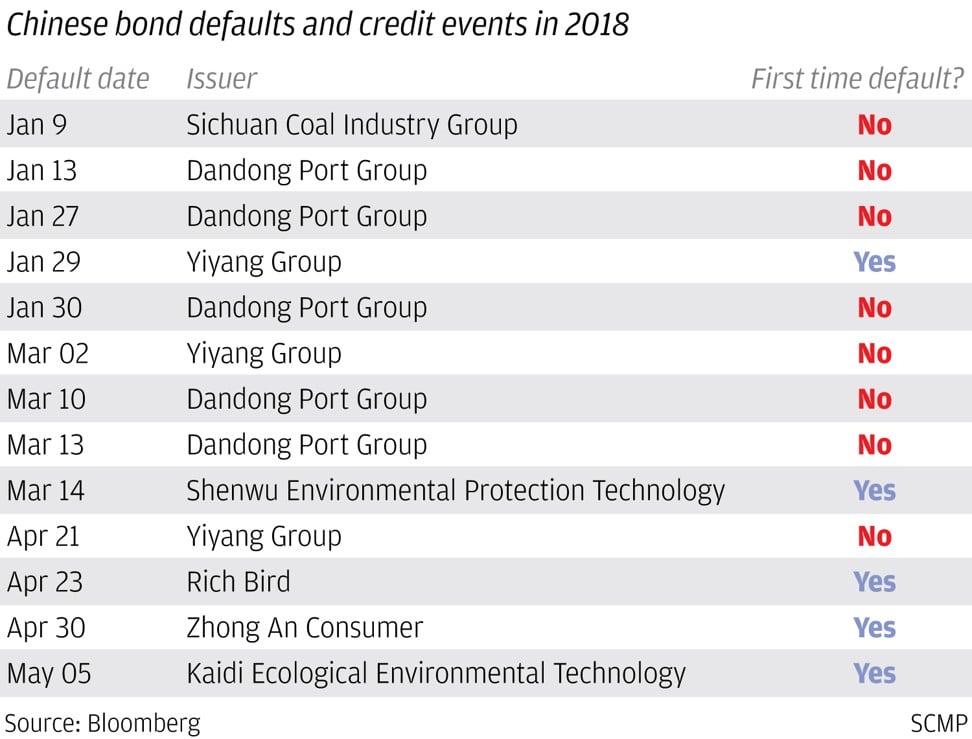 Cash-starved companies have come up with an innovative way to make repayments. Chuying Agro-Pastoral Group said in November that it had reached an initial agreement with creditors to repay the interest portion with ham or pork gift packages.

“The record defaults in 2018 were triggered by the financial deleveraging,” wrote analysts from China International Capital Corp in a recent research note.

“The defaulters mostly have accumulated high debt in the past few years and are heavily dependent on bond financing. When the overall financial environment tightened, they ran into cash flow problems.”