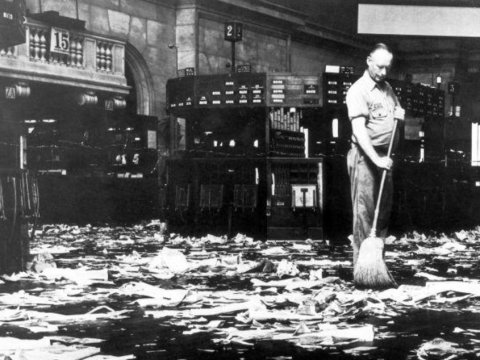 That didn’t take long. On Saturday, well before the US stock market opened post-China-trade-talks, I wrote:

The next step for the market would likely be that the remaining stock indices that have not pushed past their own previous peaks would now punch through. By that … I meant those indices like the Dow that were very close to breaking past their old heights

“Best-Case Scenario Has a Worst-Case Twist“

No surprise. The very day the market re-opened, the Dow pushed intraday past its previous record and then failed and ended the day lower than it began. I won’t be surprised to see it try again, but it won’t get far beyond that point, and probably won’t hold long because …

With the Xi summit being something Trump can trumpet about for one or two toots, I would not be surprised to see the Dow break through its past ceiling due to the market’s relief that the G-20 did not result in tariff escalation that had been threatened. However, I also gave a major caveat in my best-case scenario, so hang on: “Well, the market has clearly already priced in a trade agreement being reached — also, with apparently 100% certainty — so hope won’t buy a lot more headroom at the market’s top because it’s the same hope that investors have been spending all along….” That means the market likely gets a boost as it raises a cup of cheer to tariff relief…. That will be short-lived.

Well, it was even more short-lived than I thought it would be. While the S&P 500 scratched out a new record, the Dow didn’t even hold through the day, and both are starting today in the red.

Trump, having crumpled in front of Xi now itched for new trade-war action with a weaker competitor, so he moved on to Europe, sucking faint hope out of the stock market:

Wall Street is setting up for a softer session Tuesday after news the U.S. may expand its EU trade-levy threat list. On Monday, the S&P 500 backed off a new intraday high by the close, as investors seem to increasingly want more than just optimistic words when it comes to a U.S.-China trade deal.

And the key to what is happening there, says Prudential Financial via MarketWatch is …

Investors may get blind sided by potential fallout from global trade tussles when companies start revealing results, in two weeks.

Which also heralds back to exactly what I said over the weekend, which was a quote of what I predicted before the summit took place:

Buybacks are now temporarily frozen out. Even Crazy Cramer is saying the economy looks worse than what the market thinks, He has even stated that, with all of his many executive contacts, he knows of no company that is not going to come in with lower earnings than last quarter. Economic data has been trending down….

The stock market, in other words, would immediately have to begin facing real economic data that was not going to be good. Says MarketWatch, reaffirming the above…

Note that for 113 S&P 500 companies that have issued earnings guidance so far, 87 of them have steered negatively.

And, if you think the market’s boom beginning to 2019 means much, MarketWatch also reminds you that history begs to somewhat differ with you:

My view all year has been clearly stated: a recession will begin this summer. That, of course, tacitly confirmed that we would complete the longest expansion period on record — by which one does not mean the longest bull market (which ended last fall) but the longest period of non-stop expansion of gross domestic product. That prediction, of course, remains to be proven out.

What doesn’t remain to be proven is the short-term claim I made for the month of July, which was that the stock market would get very little bang for the buck out of the Chinese trade summit at the Japanese G-20 meeting.

U.S. stock benchmarks headed slightly lower Tuesday as investors dial back enthusiasm following the pause of tensions between China and the U.S. over the weekend. The Dow Jones Industrial Average … was edging back 0.2%…, the S&P 500 index … slipped 0.1%…, while the Nasdaq Composite Index … was sliding, off 0.2%…. All three benchmarks were within shouting distance of recent highs.

Almost reminiscently within shouting distance and yet already — only a day after the market reopened — watching those brief high blips slip away in the rearview mirror … at least as the day begins.

Government bond yields in the U.S. and Europe dipped Tuesday as optimism about the prospects for a trade deal between Washington and Beijing faded.

So sweetly sad. Neither the Dow nor Nasdaq managed to claim new highs at closing on Monday. Maybe later today. Maybe tomorrow, but the hopes are diminishing quickly, and upward moves will be small if at all.

Doubts that a substantive deal can be quickly achieved has made investors reluctant to bid stocks much higher ahead of U.S. labor-market data due Friday…. Nothing much has changed.

This may be the shortest post-G-20 “trade truce rally” yet, because one day after global markets jumped, with the S&P hitting record highs even though nothing material was announced in the aftermath of US-China trade talks, the rally fizzled and global stocks eked out only meager gains, while US equity futures dropped in the red, following a fresh escalation in the US trade conflict with the EU, and amid renewed worries the global economy was faltering after data showed manufacturing activity slowed last month, snuffing appetite for risk.

As I had said,

What we have in July is the real economy to face, more than the fake market. Though trade tariffs are temporarily somewhat sidelined with the stock market having received what it wanted, the economy isn’t going to change for the positive one bit because of that.

Yes, all eyes have quickly moved to watching the economy … and the Fed:

There was one little hitch in my short-term predictions:

If history is any predictor of the future (based on its patterns, which it sometimes is), then we have reason to think it won’t be long and Trump will be back to threatening higher tariffs on China.

Other than that unforeseen twist, we are right where I said we would be:

The stock market, in the best case scenario, stalls out at its new top because there is no more good news in the pipeline right now. The Fed’s fully presumed rate increase still lies a month away, so the market is going to be running on fumes in the face of falling earnings and falling projections for the upcoming quarter.

Perhaps there is a purpose to Trump’s turn toward Europe, for I also had said …

Trump badly wants rate reductions from the Fed and may see uncertainty over a trade agreement as a way to press Powell to move on that, given that trade uncertainty seems to be what tipped him in the direction of talking about loosening the financial reins in June. Trump will want to press him from talk to action, and that’s a hard press.

Interesting, huh? Wanting to give negotiations with China another round, Trump has turned to increasing trade tensions via Europe in order to keep pressing Powell to give that rate decrease for which Trump has been begging. Trump is begging because those monumental Trump Tax Cuts have netted almost nothing for the US economy, which is fading under them. Trump knows the main driver for the stock market — which he wears as his badge of economic success (never mind that it is, as I said in my last article completely “unhinged from the economy”) — is the Fed!

Since the economy, itself, looks like food for worms, Trump desperately needs the stock market to rise because many people mistake the stock market (long an indicator of the economy, but no more) for being the economy. If stocks are up, the economy must be up. With the economy now sinking, the stock market is entirely fed by the Fed because there isn’t any economic juice. It’s got nothing else to grow on. (Or very little anyway, as I’ll lay out in my next article.) So, Trump has turned to ratcheting up trade tensions with Europe in order to keep holding Powell’s feet to the flames.

Thus, here we are … exactly where I said we would be at this juncture:

The market is clearly going to be bucking a lot of headwinds throughout the July corporate reporting season, and the fumes of Chinese trade hopes are not likely to sustain much lift when they are already priced in. So, in the best-case scenario, the market rises briefly, then struggles to hold against all these winds to await the Fed’s actions.

There remains one little caveat to all of this. If Trump in his war with the Fed pushes Powell too hard, Powell may push back. The Fed may decide its paramount need is to prove its independence (not from the market, where it gave up independence long ago, becoming the market’s bitch) but from the political manipulation of any president. If that happens so the Fed doesn’t budge on rate cuts at the end of July, we switch instantly to my “worst-case scenario” where the market gets immediately buried.

Powell hasn’t shown he has the guts for that, but push a little guy hard enough, and he sometimes pushes back. I’m still leaning to the likelihood I’ve stated all along of rate cuts in July, and the economy collapses anyway, taking the stock market down with it — because that is where we are going regardless since the Fed’s tightening is already bursting its recovery bubble — but the market will crash a lot harder and faster if Powell doesn’t deliver on the market’s demands, and Powell, as I laid out in a recent Premium Post, has been talking A LOT about the all-out importance of maintaining Fed independence.

That could be a titillating little twist in Powell’s panties.