CNN’s Cuomo fabricates a nonexistent text message to omit exculpatory evidence. Full text: “Bill, I believe you are incorrect about President Trump’s intentions. The President has been crystal clear no quid pro quo’s [sic] of any kind…” 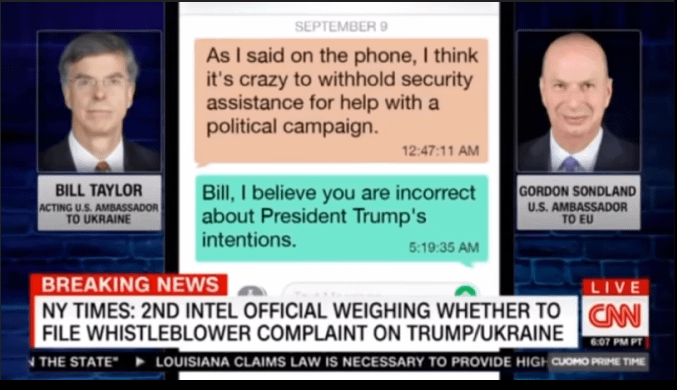 Full text of the reply (couldn’t fit it in the headline): “Bill, I believe you are incorrect about President Trump’s intentions. The President has been crystal clear no quid pro quo’s [sic] of any kind. The President is trying to evaluate whether Ukraine is truly going to adopt the transparency and reforms that President Zelensky promised during his campaign,”

On June 29, 2016, following intensive collaboration between the DNC and the Ukrainian government of Dmitro Poroshenko, the FBI signs a Memorandum of Understanding with the National Anti-Corruption Bureau of Ukraine (NABU). In the words of then the FBI Acting Deputy Assistant Director Mathew S. Moon:
If, for instance, your criminal proceeding has the accordant proceedings in the US, you [NABU] can give us the numbers of the bank accounts and it will be the reason for us to issue a notice of suspicion for a person and receive the necessary information much faster.
“The person” targeted by this accord is Paul Manafort. The term “notice of suspicion” is a Freudian slip. The MoU explicitly mentions information flow in both directions, and “international money laundering,” a vaguely defined crime to which Paul Manafort later admitted. In August, NABU would publish on its website a cute Statement regarding P.Manafort’s appearance on the Party of Regions black ledger:
In response to numerous requests from mass media regarding appearance of the name of Paul Manafort on the Party of Regions ‘black ledger’ … Paul Manafort is among those names on the list of the so-called “black ledger” of the Party of Regions, which is investigated by the detectives of National Anti-Corruption Bureau of Ukraine.
To avoid rumors and speculations, the NABU is publishing copies of 19 pages, containing 22 items related to the name of Paul Manafort.
Cute, isn’t it? The pages are empty, except for lines mentioning Manafort. Notice that this so-called “black ledger” came into play only on May 27, after the DNC asked the Ukrainian government for help against Donald Trump. From a recent NABU statement:
“The Party of Regions “black ledger” — more than 800 pages of records, passed by the former First Deputy Head of the Security Service of Ukraine Viktor Trepak to the NABU on May 27, 2016. The records allegedly contain data on multiple payments from the shadow cashbox of the Party of Regions to Ukrainian top-officials and civil activists.”
The FBI knew or suspected that the “black ledger” was fake.
By the way, Matthew S. Moon was appointed by the FBI Director Comey to his high office in DC in February 2016. He moved from Los Angeles, CA. From Moon’s LinkedIn profile:
Dates Employed: Feb 2016 – Feb 2018
Location: Washington D.C. Metro Area
Senior Executuve in the Criminal Investigative Division, Public Corruption and Civil Rights Section. Was responsible for all Public Corruption, Civil Rights, International Corruption -FCPA/Kleptocracy/Antitrust, and International Human Rights investigations at the FBI.
Dates Employed: Apr 2011 – Feb 2016
Location: Greater Los Angeles Area
Oversaw all Public Corruption, Civil Rights, and White Collar Crime investigations for FBI Los Angeles.

Several years ago the architect of Obamacare, Jonathan Gruber, admitted on camera the Democrats who were assembling healthcare legislation were “relying upon the stupidity of the American voter”….  Fast forward to House Speaker Nancy Pelosi in 2019 and her “official impeachment inquiry” by decree; she’s doing the exact same thing.

Speaker Pelosi, working through a carefully constructed political dynamic assembled by the hired staff from the Lawfare alliance, has sold her constituency on an impeachment process that structurally doesn’t exist.

Speaker Nancy Pelosi could never succeed in the scheme were she not assisted by a compliant media.

In the last week you’ve probably heard the media sell a narrative that Speaker Pelosi’s House Committee teams are sending out subpoenas to the State Department and White House.  However, has anyone actually looked for those “subpoenas”, or read the language of the written communication from those committees’?

Using the House Oversight Committee as the example (because that’s the one most citedand all of the letters are formatted identically), take a careful look at how they frame their undertaking.

As you read this, remember: these carefully chosen words come from the Lawfare Alliance:

Notice the phrase “sent a letter conveying a subpoena“?

That statement is not the same as ‘sent a subpoena’; actually, it’s not even close – it is pure parseltongue.  You can call any car a Ferrari, but that doesn’t make it so.

Things get a little technical and wonky but essentially the term “subpoena” literally means “under penalty“.  A subpoena duces tecu, requires you to produce documents.  In this example a congressional subpoena literally, and only, means: a request for the production of documents with a penalty for non-compliance.  Read the letter HERE:

Remember when Democrats were recently delegitimizing the Supreme Court through attacks against Justice Kavanaugh?   Well, how likely is it that any legal test of this arbitrary “impeachment inquiry” is going to end up at SCOTUS?  Things making more sense now… I digress.

As a result of all the above these are political subpoenas, demand letters as weapons;  constructed for optimal political value, and framed to create obstruction articles of impeachment.

This is a carefully constructed subversion of the constitutional processes and procedures.

As a result of the need to create the optics of something that doesn’t exist; and following the roadmap they outlined in 2018 [See Here and Here]; the Lawfare contractors within the committees’ needed to construct a penalty mechanism that benefits the impeachment agenda but avoids the court system.  As a result we see this:

The failure to comply with a non-official subpoena (essentially a letter); for documents relating to a fake “official impeachment inquiry” (Pelosi decree); that the House specifically never intends to enforce in any court (because they would fail); results in the House committee finding of “obstruction.” An enhancement for their impeachment articles.

Gee, where did the House Committees’ come up that that idea?

Anyone noticing a consistent pattern yet?

In 2018 we noted the significant House rule changes constructed by Nancy Pelosi for the 116th congress seemed specifically geared toward impeachment. {Go Deep}  That impeachment plan was made at the same time as the “Lawfare Obstruction Roadmap” was drawn up.

These letters from congress, they are calling ‘subpoenas’, are specifically designed to avoid the courts because of the unilateral nature of the investigations which underpin their content.  Quite a scheme: