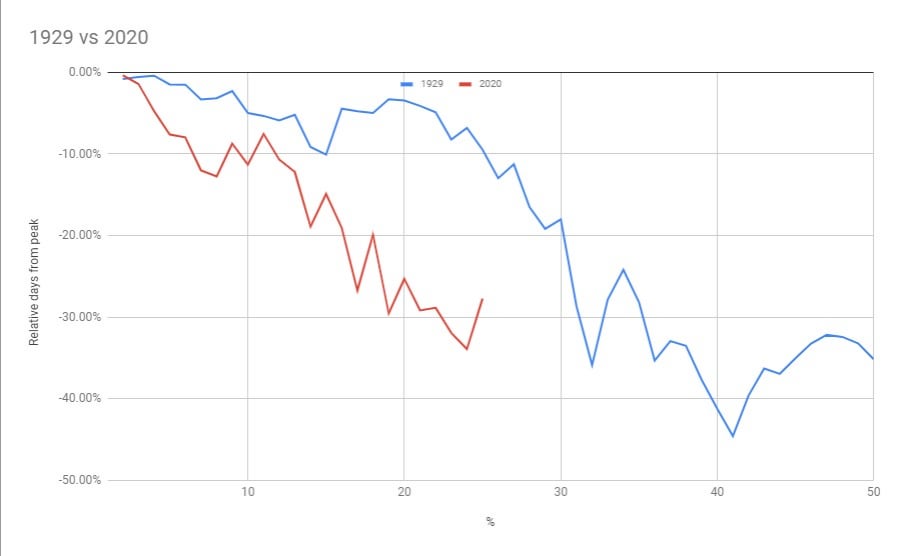 By plotted the two at a zoomed in level, you can see that while the initial drop of the current crash is faster, the second drop seems to be well aligned (see table at bottom). The speed (# of days) of the first retracement and second drop actually match quite nicely when viewed in table form. Pay special attention to the numbers of days of each leg.

Just because it happened in the past, doesn’t mean history will repeat itself. We’ll disregard that for the sake of this post and assume that we can expect similar performance.

Where is the next retracement?

I believe the retracement has started bouncing off of the 2200 support line. This was the last major un-test breakout and is inline with u/Variation-Separate post.

How far is the next retracement? Comparison of 2008 and 2020 to help determine retracement depth.

Based on historical data, I believe the next retracement will end between 2500 and 2650.

In both cases, first pullback was to the 50% fib level which establishes a baseline to be able to compare the two.

TL;DR Where we can expect it to go and when?

Tying all the various technical aspects and the comparison to 1929 and 2008, here are the follow predictions:

An aside: Many people have stated repeatedly that history doesn’t matter, I believe that is does. Major players in the market will use either historical values or technical analysis to help determine where to take profit and re-enter the market. At this point, I believe the market has already had its knee-jerk reaction to the virus, next is simply a bear market/recession.