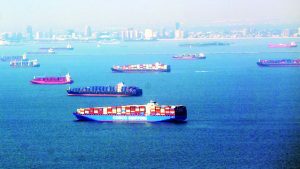 The Ports of Los Angeles and Long Beach, the two most active ports in the US, will resume container dwelling fees as of today. The moratorium went into effect on October 25 as the California ports became a crowded parking lot for cargo ships. Port officials claim that this move has created a 41% decline in aging cargo on the docks.

The container dwelling fee charges carriers $100 per import container. Containers scheduled to arrive by truck have nine days before the fee is implemented, while those arriving by rail have only six days. The fee rises by an additional $100 per container for each day the ship sits stagnant.

See also  Air defense systems were lifted onto buildings all over Moscow today.

Before the pandemic, dwelling periods for containers took around four days for local truck delivery and two days for rail delivery. It is now extremely common for ships to await docking for well over a week, at no fault of their own. There have been numerous reports of ships simply turning around as they could not offload.

If eliminating this fee actually caused a 41% decrease in aging cargo, then it seems premature to end the moratorium as the supply chain crisis is ongoing.

Trending:
See also  Yesterday, Bank of America was down. Today, Chase bank is reported down in some areas...
Views: 47