So, it came – and I lean towards calling it the start of a correction. Right at the beginning of September, giving meaning to my yesterday raised doubts:

(…) Isn’t Wednesday’s accelerated upswing too good to be true? While I have no doubts about stocks being in a strong bull market, isn’t a bit than stellar path ahear in the coming day(s)?

Yesterday’s downswing came in not as a shallow one – but neither was the breakout invalidation from the early June bearish wedge once the euphoria from the positive June non-farm payrolls wore off.

So, what would today’s reaction to the rebound veracity (that I have publicly called as uneven, not V-shape like, having run into a weakening patch lately, and for want of a better word, desperately in need of new stimulus), be?

That’s what my intraday Stock Trading Alert #2 was about.

Let’s get down to the charts’ messages. 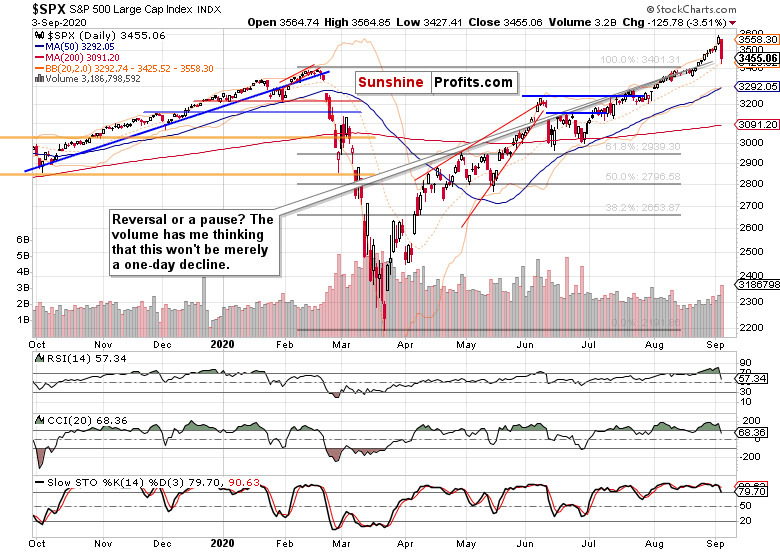 It smacked of a buying climax in the short-term, and turned out to be one. High volume (but not way too extraordinary), some lower knot… My interpretation? On one hand, the correction isn’t likely over yet, but a daily upswing attempt is probably coming – and the bulls will have to prove that it wouldn’t turn out as a dead cat bounce.

The Credit Markets’ Point of View

High yield corporate bonds (HYG ETF) didn’t decline as steeply yesterday, and the volume coupled with the lower knot point to no selling stampede on Thursday (please see this and many more charts at my home site). The daily setback in investment grade corporate bonds (LQD ETF) was even less pronounced. 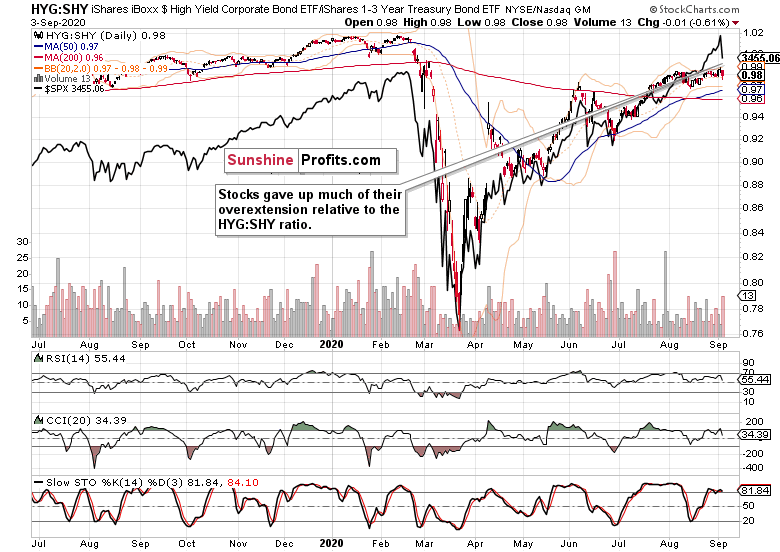 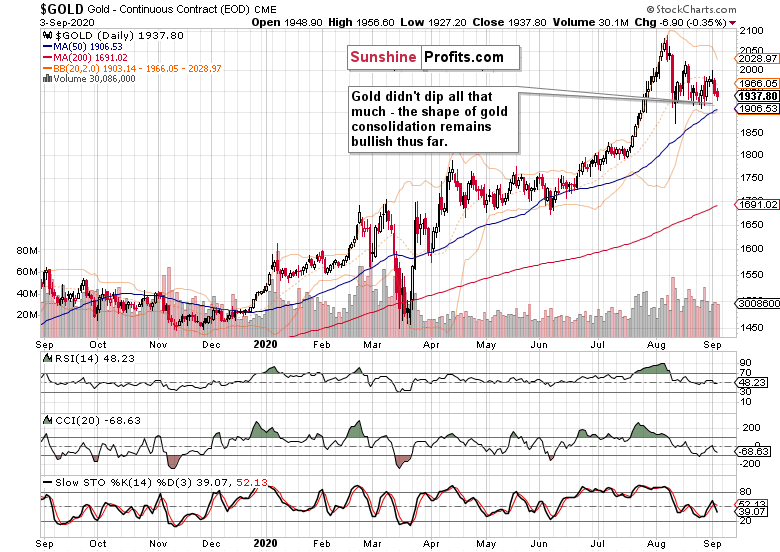 The yellow metal recovered similarly to bonds from yesterday’s selloff. No rush to liquidate longs, and the current consolidation still can turn out to be a bull flag (however extended in time, because the king of metals had quite a run since recovering from the March deflationary collapse). 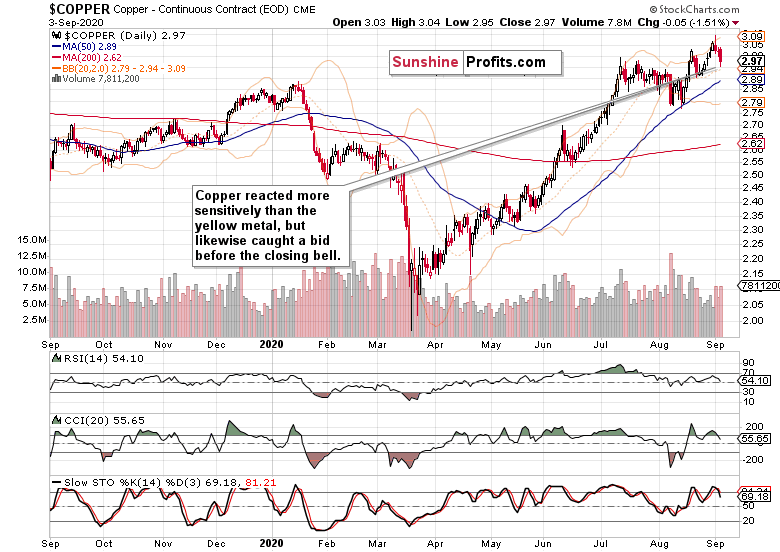 Copper took a larger hit, but isn’t rolling over either. The upcoming sessions will be telling but I look for its uptrend to resume before too long.

The key culprit of declining S&P 500, technology (XLK ETF) – its volume and candle itself call for caution as the correction here isn’t likely over yet.

Summing up, despite yesterday’s profound setback, the S&P 500 is still in a bull market.  The correction though appears likely to have a bit further to run in time, as a minimum. The autumn storms have arrived on a daily basis, but the medium-term picture still remains bullish. The weekly closing prices will be a reality check for the bulls – will they be step in at these negative market breadth readings? For those bullishly inclined, best to be approached with a reasonably tight stop-loss – which is exactly what I did prior to finishing writing this Alert.

All essays, research and information found above represent analyses and opinions of Monica Kingsley and Sunshine Profits’ associates only. As such, it may prove wrong and be subject to change without notice. Opinions and analyses were based on data available to authors of respective essays at the time of writing. Although the information provided above is based on careful research and sources that are believed to be accurate, Monica Kingsley and her associates do not guarantee the accuracy or thoroughness of the data or information reported. The opinions published above are neither an offer nor a recommendation to purchase or sell any securities. Ms. Kingsley is not a Registered Securities Advisor. By reading Monica Kingsley’s reports you fully agree that she will not be held responsible or liable for any decisions you make regarding any information provided in these reports. Investing, trading and speculation in any financial markets may involve high risk of loss. Monica Kingsley, Sunshine Profits’ employees and affiliates as well as members of their families may have a short or long position in any securities, including those mentioned in any of the reports or essays, and may make additional purchases and/or sales of those securities without notice.