This bull market can be more positive than the previous one both for gold and the mining stocks.

In the last edition of the Fundamental Gold Report, I analyzed various WGC’s reports on the gold market. Today, I will focus on the issues of Alchemist – the flagship publication of the London Bullion Market Associations – I was unable to discuss during the most acute phase of the pandemic and the following economic crisis.

I’ll start with the article “Is there a place of Gold Equities in a Gold Allocation?” by James Luke from issue no. 96. The Author poses title question because gold equities performed poorly relative to the gold prices over the last 10 or even 20 years, and “investors would have been better served staying well away.” Indeed, while the gold price is up more than 250 percent since 2005, the HUI Gold Index is just about 20 percent higher.

Wow, it was a harsh criticism! But justified given the fact that although in theory mining stocks provide a leveraged way to own exposure to movements in commodity prices, in reality many miners lag behind the physical market. This is why I always warn investors that investing in gold shares is very demanding, as mining stocks are not a perfect play on gold or other metals. In other words, investing in miner’s equity is a whole different kettle of fish, as “the stocks are not a safe haven against market turmoil, but a bet on company’s operating earnings and the management team which controls it”. Indeed, the problem of gold equities over the last decades was – according to Luke – that “yes, you had higher prices, but no, the industry did not capture margin, and no, the industry did not generate returns”.

However, that may change now. The Author believes that producers are facing now a friendlier environment in which they could be able to capture profit margins far greater than in the past. You see, in the 2000s, gold was rallying together with other commodities and with its own input cost base, which cannibalized the margins. But the current gold’s rally is more monetary-based than commodity-based, which supports gold prices but remains cost inflation limited.

Another interesting article from the Alchemist, this time from issue no. 97, is “Gold Resilient in Adversity” by Rhona O’Connel. She compares gold with other commodities, pointing out gold has been the outperformer within the sector. While other metals suffered massive demand destruction and price falls of several percent amid the coronavirus crisis, gold has been a “sanctuary from the vicissitudes of the economic environment”. The conclusion is simple: the impressive gold’s performance compared with its commodity peers underlines the safe-haven status of the yellow metal and the fact, emphasized by me for a long time, that gold is more of a monetary asset than a mere commodity.

I left the most controversial article from Alchemist issue no. 97 – The Rational Case for $7,000 Gold by 2030 written by Charlie Morris – for last. The Author starts with the observation that gold has been the leading major asset class in the 21st century, which is an extraordinary achievement given that gold doesn’t pay a yield.

Some people believe that because gold doesn’t pay a yield, gold can’t be valued. But Morris disagrees – and he models gold, very interestingly, as a bond with the following characteristics: it is zero-coupon because it pays no interest; it has a long duration because it lasts forever; it is inflation linked, as historic purchasing power has demonstrated; it has zero credit risk, assuming it is held in physical form; it was issued by God.

Wow, what an original bond! The model makes clear why the main driver behind the gold’s gains in this century was the fall in the U.S. real interest rates, as the chart below shows. According to the Author’s model, gold is traded now with premium over its fair value, but investors should not worry, as “it is more likely to rise from here than reverse. That’s because gold is in a bull market and the forces driving it higher far outweigh the forces holding it back.” 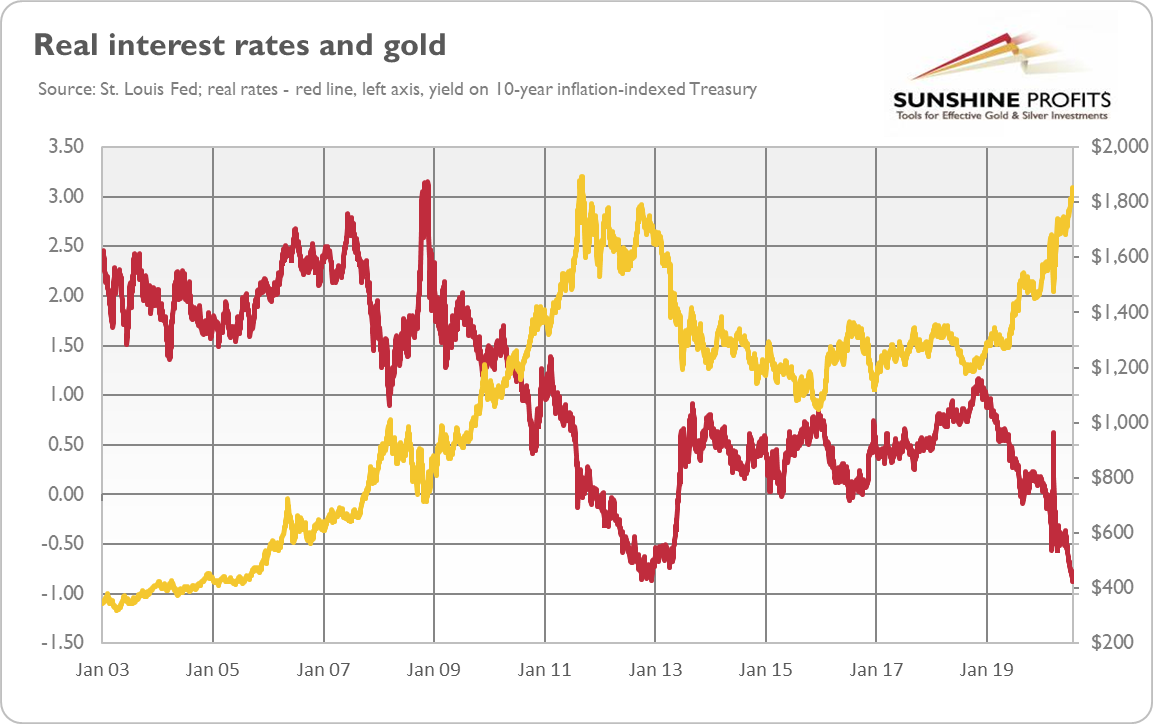 In particular, Morris believes that gold simply sees inflation coming in 2021. After all, contrary to the quantitative easing that occurred in the aftermath of the Great Recession, this time the surge in money supply flows into the real economy. Hence, according to the Author, if the long-term inflation expectations rise, together with the gold’s premium, while the bond yields remain ultra low, the price of gold could rationally achieve the level of $7,000. After all, “the huge gains in the 21st century have occurred in an environment with falling rates, while long-term inflation expectations have barely moved. With higher inflation on the horizon, things start to get interesting.”

Although $7,000 sounds to me like an exaggeration, I agree with the article’s main premises: the repercussions of the coronavirus recession could be more inflationary than the Great Recession, and that gold is in the bull market that could last for a while.