With airlines facing a $250-billion loss in revenue for 2020 at a minimum, the additional $35 billion they might have to pay in the form of refunds over the next few months makes for a staggering amount. The dire situation has led pundits to ponder whether the industry might be willing to climb into bed with the government in a quasi-nationalization plan that would bail them out.

In other words, the airlines are only getting a $17.5-billion bailout–the rest will have to be paid back, and they will have to offer stock warrants on approximately 10% of the loan amount, which could subsequently be converted to shares by the government, according to the Wall Street Journal.

Indeed, it’s not nearly as much of a bailout as the industry was hoping for, even according to Treasury Secretary Steven Mnuchin.

“It is our objective to make sure, as I have said, that this is not a bailout, but to make sure that airlines have the liquidity to keep their workers in place,” Mnuchin told CNBC on April 11th.

Beyond the tweaked numbers, airlines will also have to contend with restrictions that say they cannot lay off workers or cut salaries until October, nor can they engage in share buybacks or the paying out of dividends to shareholders.

It could very well mean bankruptcy for some airlines, whose only play left may be to sell shares to the government.

Regardless, with restrictions in place–including the requirement that airlines continue to fly to locations they had been flying to prior to March 1st–the government has an immense amount of control over their operations. In fact, it’s no longer up to the airlines where they fly and how often, it’s up to the Secretary of Transportation, as pointed out by Reason magazine.

It’s nationalization to a certain degree because bailout money, in whatever form, is dependent on so many restrictions. 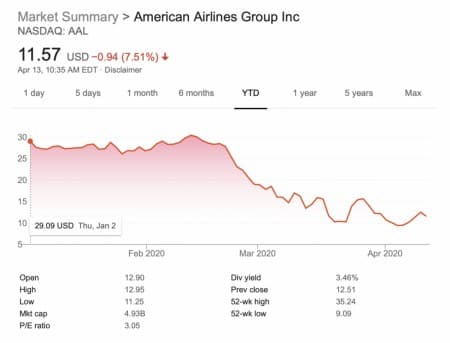 American has slashed its flight schedule for May by 80%, and year-to-date its stock has shed 56%.

American Airlines has over $7 billion in liquidity, but it also has a serious debt load that has nothing to do with COVID-19 or the bleeding of revenue to come due to flight cancellations, paid leave and early retirement. That’s because this is American’s second bailout party in 20 years. The first was the aftermath of 9/11, which it survived thanks to the grace of the government, a merger and the entire industry’s subsequent binge on cheap debt. At the beginning of this year, the airline had nearly $30 billion in liabilities, according to InvestorPlace, while its current market cap is only around $5 billion.

From 2014 through 2019, American spent nearly $13 billion combined on buybacks and dividends, yet here we are. We’re discussing a stock that trades at a third of the levels it did in early 2014 and is flirting with all time lows.

So, while American Airlines shares got a bit of a boost Monday, it didn’t go unnoticed that it underperformed its peers, nonetheless, leading JPMorgan analyst Jamie Baker to downgrade American from “underweight” to “overweight” because of the airline’s “negative” equity value and what seems set to be rather lengthy post-coronavirus recovery.

Year-to-date, Delta Air Lines (NYSE:DAL) stock is down about 58%, which means the shares are now in a bear market. The company has already suspended share buybacks and dividends, though the terms of the ‘bailout’ would have required this anyway. 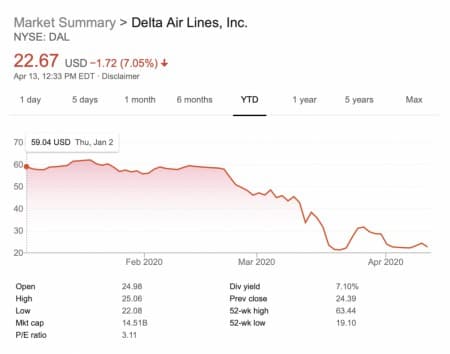 Last month, Delta CEO Ed Bastian confirmed that the airline had negative net bookings, had cut about 70% of capacity, and grounded 600 planes.

Despite all of that, the company also announced that it would start loading airplanes from back to front, a new boarding procedure taking social distancing in mind.

On Friday, Delta said 35,000 of its 90,000 employees had volunteered for some sort of leave as the airline seeks to staunch the bleeding on its approximately $60-million-daily cash burn.

So far in April, Delta’s shares are down over 20%, and even Warren Buffett’s Berkshire Hathaway has slashed its roughly 11% stake in Delta by nearly one-fifth, from 71.9 million shares to 58.9 million. According to regulatory filings, last Wednesday Berkshire sold nearly 13 million Delta shares for about $314 million. 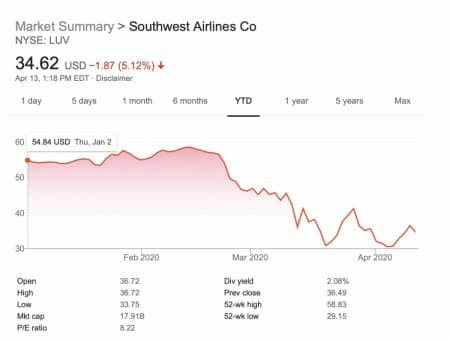 Berkshire Hathaway also sold about 2.3 million shares in Southwest (NYSE:LUV), reducing its stake in the airline by just over 4%, for about $74 million.

Some 20,000 Southwest Airlines employees, of a quarter of total number, have signed up for varying levels of time off and leave as the company looks to cut costs.

Southwest also halted all share repurchases in mid-March, but since the beginning of 2020, the company had spent $585 million on stock buybacks.

But Southwest is rather cashed up, unlike American. LUV started 2020 with $4.1 billion of cash and short-term investments while it took two $1-billion loans, giving the company a cash balance of $6.2 billion. That’s pretty good considering that in Q2 2019 its operating expenses were $4.94 billion. 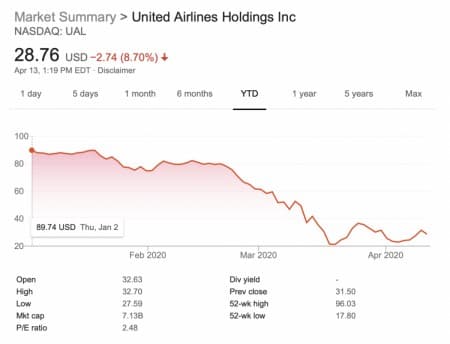 United said it is losing more than $100 million a day in revenue and that it expects fourth-quarter revenue to be down at least 30% from the year-ago period.

United Airlines (NYSE:UAL) has taken a nose-dive with its stock falling 70% since the start of the coronavirus pandemic.

The company had 96,000 employees at the start of the year and announced massive layoff without federal aid. The company said that it will take the necessary steps to reduce our payroll to match a 60% reduction in flying planned for April. It means that layoffs could be close to 58,000 jobs.

Despite the fact that the airline temporarily suspended all long-haul international flights, now it has opened up booking for three transatlantic flights to Europe and two additional nonstop flights to South America for the beginning of May.

The worst-case scenario in terms of COVID-19 has already been priced in for the travel industry, and for airlines in particular, but for some more than others (American, for instance, is not likely to recover as quickly as Delta because of its massive debt) the lesson that wasn’t learned after 9/11 may finally be learned this time around, even if it is too late. This is a government game now.

By Michael Kern for Safehaven.com