What’s left are the ‘fatal synergies’ of soaring debt and leverage, diminishing returns on stimulus, the substitution of credit for savings and the coming deflationary tsunami that pops all the speculative bubbles.

Imagine a once modest but sturdy home built near a cliff to maximize the vistas. Over the decades, the foundation slowly degraded and the house moved imperceptably closer to the unstable edge of the cliff. Those who observed the slippage and the potential for eventual disaster were either derided as alarmists or ignored.

Given the enviable location and views, the home rose in value and a series of increasingly gaudy additions were added, completely obscuring the once-modest exterior with cheap imitations of long-lasting, time-tested materials (plastic trim and brittle fake-marble veneers). The foundations of these ostentatious additions were slapdash, shallow and poorly made, as the goal was not durability but appearance.

The low-quality additions accelerated the slide to the unstable cliff edge, and in 2019 the viewing deck broke away and crashed into the canyon below. The repairs were hasty and the residents were assured all was well–in fact, better than ever.

In 2020, the weak foundation of the gaudiest, lowest-quality addition crumbled. The response of the owners was to fill the widening crack in the decaying structure and spray on a new coat of paint. There–good as new, the residents were told.

But this was not true. The house is now teetering on the precariously unstable cliff edge. Ironically, the vast majority of the residents have moved to the game room, which is now cantilevered over thin air. The slightest movement will tip the entire decayed structure over the cliff.

That decayed, precariously unstable structure is the U.S. economy, and Covid was the catalyst that nudged the economy right to the edge. Gordon Long and I discuss the causes and consequences in our new video program, Covid Has Triggered The Next Great Financial Crisis (34:46).

Chief among the many causes is a very basic one that’s easy to understand: America has consumed more than it has produced for decades, and filled the gap with imports purchased with borrowed money and currency created out of thin air.

As Gordon and I explain, this is a very well-worn path to instability and collapse: governments (which now include nominally independent central banks) have always responded to declines in productivity and affordable energy/materials, the expansion of a parasitic elite and excessive spending with the same bag of financial tricks:

1. They borrow more money, eventually borrowing more to pay interest on existing debts, greasing the slide to default and insolvency.

2. They defraud the users of their currency by devaluing the currency. In the old days, this was accomplished by substituting base metals for silver or gold in the minting of coinage. Eventually the coins contained only a trace of silver. Users soon caught on and the result was the coinage lost purchasing power, a.k.a. inflation destroyed the value of the officially issued money.

In today’s fiat currency regime, central banks create trillions of new units of “money” with a few keystrokes, effectively diluting the value of all existing currency.

3. Desperate for revenues, governments raise taxes, which despite all claims to the contrary by political leaders, fall most heavily on the productive middle class. Since the parasitic elite will never accept any consequential reduction of their wealth or power, the higher taxes and economic stagnationthat result from these three policies crush the middle class, which was the engine of productivity and demand that enabled the parasitic elite to live large.

These are key dynamics in what Gordon calls the killing of the golden goose, the productive synergies that generate widespread prosperity and opportunity.

What’s left are the fatal synergies of soaring debt and leverage, diminishing returns on stimulus, the substitution of credit for savings and the coming deflationary tsunami (53 min) that pops all the speculative bubbles, setting up the destabilization and cliff-dive of the entire decayed, flimsy structure–The Next Great Financial Crisis that cannot be papered over with more central bank legerdemain. 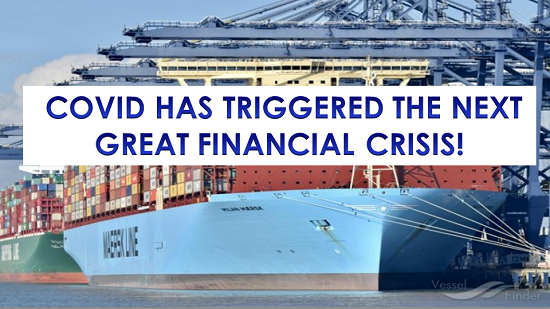 Covid Has Triggered The Next Great Financial Crisis