Can anybody say with a straight face that America is the land of the free, home of the brave? I remember back in the day people used the expression “it’s a free country” quite often. You don’t hear that anymore. Why?

Because America is slowly becoming a soft tyranny, a high-tech mélange of fascism, corporatocracy and oligarchy working under a fake bi-party system, which in reality is a single party, CCP style, controlled by foreign lobbies and special interests.

Something the world has never seen before in such detail. And everything happens with the consent of the governed, that’s the most flabbergasting thing. People never learn anything from history.

Watching the US going down in flames from a distance is almost surreal for a person who believed for decades that the United States of America is the freest country in the world, with free speech and justice for all.

Not anymore, as the transnational cabal that rules the world through central banking and more recently by controlling the narrative (propaganda basically) via big tech and mainstream media, managed to finally destroy the last bastion of liberty.

Speaking of big tech, you know what is funny? VK and Telegram, two Russian social media platforms, are now the places where Americans flock in search of free speech, leaving Twitter and Facebook in droves. And speaking of free speech, last week was the moment when the transnational cabal showed its true face and banned real President Trump from virtually all social media.

Following the “attempted coup d’état” at the Capitol, Trump was banned from Twitter and Facebook, Twitch and many more, including Shopify, an e-commerce platform from Canada. Strangely enough, Amazon still sells MAGA gear, which means Bezos is not as stupid as Tobias Lutke and Finkelstein.

After getting banned on Twitter and Facebook under the pretext that his messages could be interpreted as a call to violence by Q-people (the dumbest excuse I’ve ever heard), Trump then went to Parler, which is set to become the Republican (as in a right-wing kosher echo-chamber) version of Twitter, and guess what: Amazon, Parler’s web hosting provider, kicked them out, and starting with like, today, Parler must find another company to host them. 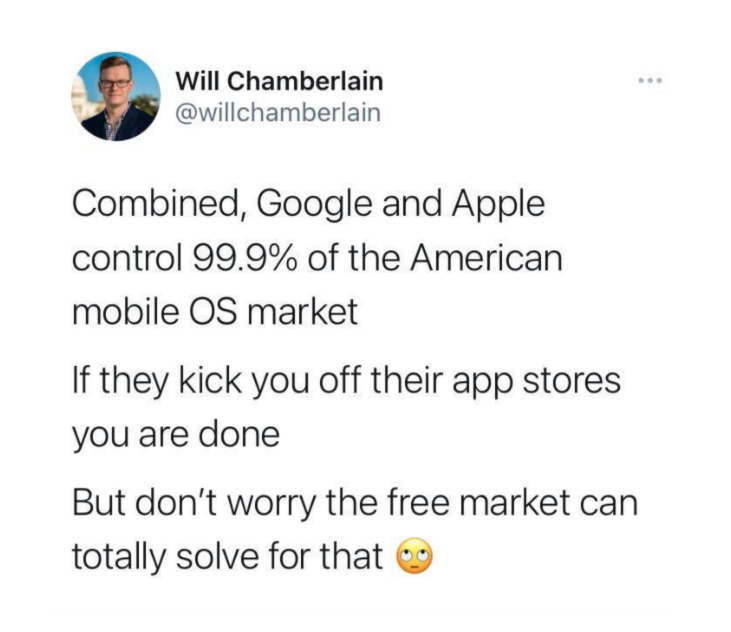 As a fun factoid, Parler (and Gab previously) had their apps pulled from the app stores of both Google and Apple.

Which is not very hard, but it’s actually more complicated than that, i.e. Cloudflare will pull the plug next, then domain registrars will confiscate their domain, payment processors will deny service, then banks will close their accounts (research the MATCH list of Mastercard) etc.; this is not science fiction, but already happened, and it is the proverbial slippery slope that started back in 2017 with the destruction of Daily Stormer, because Anglin made a mean joke about a fat woman who died of a heart attack at Charlottesville’s Unite the Right rally.

Alex Jones was next (speaking of prominent bans on social media/interwebz) and 4 years later, they’ve silenced the President of the United States.

After the CDN ban and the registrar ban, Parler and various MAGA sites are going to be in “Russia pls halp” territory; the thing is, Dlive, the Chinese streaming company already banned Nick Fuentes, Baked Alaska and many others, so forget about “Chyna” saving the day.

Don’t get me wrong: you can stay online if you’re Gab or Parler or whomever. It is possible. Even after ISPs begin hard-blocking domains China/Iran style, you will be able to stay online. But you will not be able to make any money at all, and your personal lives will be destroyed, because you’re an evil terrorist Nazi who supported Trump and you’re blacklisted from polite society. And from getting a job. Etc.

Basically, if you want free speech in America 2021, you must build your own internet, your own payment processors, your own everything, or so I’ve been told by lolbertarians, because private companies can do to you whatever they want, and if you say something, you’re a socialist.

By the way, anyone labeled “QAnon” is being banned from everywhere, so not everything is a black pill. /s. And random people who attended the rally are being fired, just for being there.

The media is having a field day, explaining this is all necessary and assuring people that everything is kosher and legal because it doesn’t violate the First Amendment for the government to use private companies for mass political censorship.

During its entire existence, the government of the United States had a history of regulating private businesses, including communications mediums, from the establishment of the postal service to the various telecommunications acts that ensured universal service to phone lines and then to broadband internet access. But that somehow doesn’t apply to free speech issues related to internet, Big Tech and social media for whatever retarded reason.

See, this is why your rights have to be inalienable; if they aren’t, then you don’t have any rights, and they will come and take your rights away from you.

Moving along, a prominent Israeli lobbying organization demands that Trump be immediately removed from office.

The Anti-Defamation League has called for U.S. President Donald Trump’s removal from office on Friday, following Wednesday’s violent attack on the Capitol by the president’s supporters.

And it was the same ADL behind banning Trump from all social media. Why this foreign nation plays such a prominent role in American politics is anyone’s guess.

However, despite of what legacy media is telling you, Trump’s approval level after the Capitol riots has gone up:

The Rasmussen poll, one of the most accurate polls of the 2020 election, finds President Trump’s approval is actually rising after Wednesday‘s protests.

As Democrats move to impeachment and some establishment  Republicans call for the 25th Amendment to remove Trump, the poll finds 48% approve of the President’s job performance.

To sum it up: what we are living now is a staged series of events designed to bring upon us a great reset (as per WEF) and a New World Order.

The Covid thing is all about reshaping western societies to follow the Chinese model, i.e. an authoritarian technocratic society, with surveillance 24/7, social credit scores and all that.

I really think that that it has all been run through computer simulations and our “masters” believe that they can lay out a series of staged events that will lead to their desired outcome.

These people are insane, drunk on power, they think they are gods and using transhumanism, they can live forever.

Also, many of them believe they are in contact with demonic entities and/or space aliens. Seriously, check that out. They are batshit crazy.