Global stocks fell for a third straight day on Friday, and were set for their first weekly loss in seven, as investors worried about a broadening global economic slowdown

This year’s remarkable surge in global equities sparked optimism that the recovery from the fourth quarter’s steep 13 percent sell-off would be V-shaped. The action on Thursday suggests it’s more likely to look like a W. After surging 8.65 percent since the start of the year, stocks tumbled as much as 1.37 percent as investors could no longer make excuses for the deteriorating economic outlook.

That was on full display in Europe, where the European Commission made sweeping downward revisions to most of the region’s major economies. It now sees the 19-nation euro-area economy expanding by just 1.3 percent this year, down from the 1.9 percent projected in November. Italy’s economy has already met the technical definition of a recession. “Much of the euro area’s loss of growth momentum can be attributed to fading support from the external environment, including slower global trade growth and high uncertainty regarding trade policies,” the commission said. That’s not wrong. The JPMorgan Global Manufacturing PMI index fell to 50.7 for January, the lowest since 2016. The measure is a diffusion index, meaning readings above 50 denote expansion and those below 50 signal contraction. “When you get these numbers coming out of Europe, it just reminds you, ‘Well, gee, that’s an issue and it’s symptomatic of all of this prevailing view that the global economy is slowing down,’’’ David Joy, chief market strategist at Ameriprise Financial, told Bloomberg News. As for “trade policies,” which is really code for the talks between the U.S. and China, the normally upbeat White House economic adviser Larry Kudlow expressed some unusual pessimism that surprised investors. He told Fox Business in an interview that there is a pretty sizable distance to go in U.S.-China trade talks, which sent stocks to their lows of the day.

READ  UP, UP AND AWAY: Inflation Fastest Since ’08… DEUTSCHE BANK issues dire economic warning for America...

Gallup Poll: Most See U.S. Economy as Slowing or Declining

“This time, easy monetary policy may lack the strength to turn the tide and avoid a recession.”

Global economic growth is being hit more significantly than many anticipate and calls for an impending U.S. recession now look increasingly credible, which is bad news for risk assets, according to Europe’s top-ranked strategy team at Societe Generale SA.

The Fed’s dovish pivot should cast doubts on how the last leg of this cycle will unfold, with investors likely to see profit warnings, defaults and increased volatility over the next 12 months, they wrote in a report Thursday. That may be favorable for Treasuries but necessitates an underweight stance on equities, credit and the dollar, they concluded.

“The damage to economic momentum and earnings seems real,” said Alain Bokobza, head of global asset allocation at the bank in Paris. “This time, easy monetary policy may lack the strength to turn the tide and avoid a recession.”

Nothing to see here. Because, obviously, structurally and statistically lower growth in trade turning negative on foot of Baltic Dry Index literally collapsing 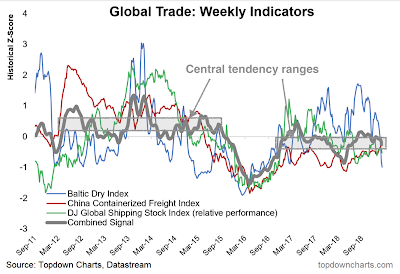 Macro Risks Could Cause Downturn That ‘Rivals’ Global Financial Crisis

U.S. investors are once again paying attention to the dark clouds gathering over the global economy, with reason to fear that the next big storm could be as damaging as the downturn that accompanied the global financial crisis a decade ago.

On a day when the S&P 500 SPX and Dow Jones Industrial Average DJIA were under pressure (though still up sharply from their late December lows), Peter Hooper, chief economist at Deustche Bank Securities issued a research report estimating the damage that may result if the three gravest threats to the global economy come to fruition.

Hooper points to a “significant escalation of trade tensions” between the U.S. and China; a hard Brexit, in which the U.K leaves the European Union with no trade deal in place; and a “sharp slowdown” in Chinese economic growth as the three major macro headwinds facing the global economy today, while arguing that if the worst-case scenarios for all three materialize in the coming months, “the world economy could face a downturn rivaling that which occurred during the great recession a decade ago.”

CDX NA IG widening this morning, credit markets are starting to worry about all that fake trade news Trump admin pumped, and of course, the global slowdown that is so rapid, even central banks have been caught off guard. pic.twitter.com/DMEya8rQSs