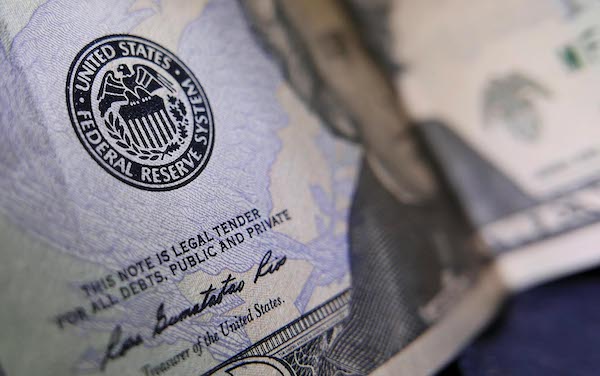 After decades of unhinged money-pumping, the Fed has driven real interest rates so low that there are no more bond investors — just traders and suckers.

The former have driven the 10-year yield in recent days to just 150 basis points in nominal terms (and deeply into the red in real terms in the face of surging monthly inflation numbers), because they are “pricing-in” one thing and one thing only: simple and supreme confidence that the spineless fanatics who occupy the Eccles Building will keep buying $120 billion per month of government and quasi-government debt. 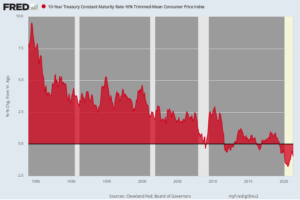 These are no longer even “markets” by any historical sense of the term. The bond markets and the stock exchanges are just mindless gambling casinos.

Inflation-adjusted yields had previously meandered around the 10%+ level for several decades. But no more. The real yield is so low that yield starved fund managers are throwing caution to the wind and setting themselves up for massive future losses.

That’s not an honest price discovery. It’s the crazed trading that has been fostered by fanatical central bankers who have literally lost touch with history, reality and every canon of sound finance.

There is $80+ trillion of public and private debt outstanding and it amounts to a staggering 380%+ of GDP.

Below is the total debt-to-GDP ratio for the last 73 years. 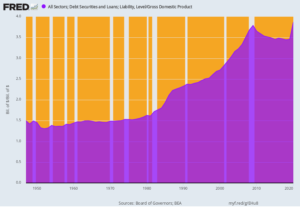 Do the fanatics in the Eccles Building have any clue about the fact that their policies amount to a massive signal flood to the US economy to bury itself in debt?

Evidently, they do not. But with each passing month of negative real yields and $120 billion of freshly minted fiat credit, the US economy slouches in exactly that direction. 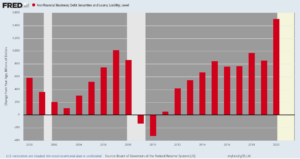 During 2020 — the year of the sweeping COVID Lockdown — conventional economics would suggest a liquidation of business debt, especially when business leverage levels had previously reached dangerous, all-time highs.

But not in the Fed’s hothouse financial markets. To the contrary, business debt soared by $1.5 trillion in 2020 or by 50% more than the peak borrowing year of 2007 when companies were on a borrowing binge.

This is truly aberrational.

Back in the day, the business leverage ratio stood at 35% in 1947 and had plateaued at about 60% by the 1970s. But once the Fed got into the financial repression business big time, the ratio was off to the races. The staggering amount of business debt now amounts to an off-the-chart 111%!

Can the clowns perched in the Eccles Building explain how the US economy can grow in the future when it is submerged in so much debt?

Can they also explain how interest rates can ever be normalized in real terms without blowing up the entire financial edifice?

And do they have a clue as to what will happen if they continue to signal private and public parties to borrow like there is no tomorrow by keeping real interest rates submerged in negative territory?

The answer is, of course: No.

Editor’s Note: The Fed has already pumped enormous distortions into the economy and inflated an “everything bubble.” The next round of money printing is likely to bring the situation to a breaking point.

If you want to navigate the complicated economic and political situation that is unfolding, then you need to see this newly released video from Doug Casey and his team.

In it, Doug reveals what you need to know, and how these dangerous times could impact your wealth.