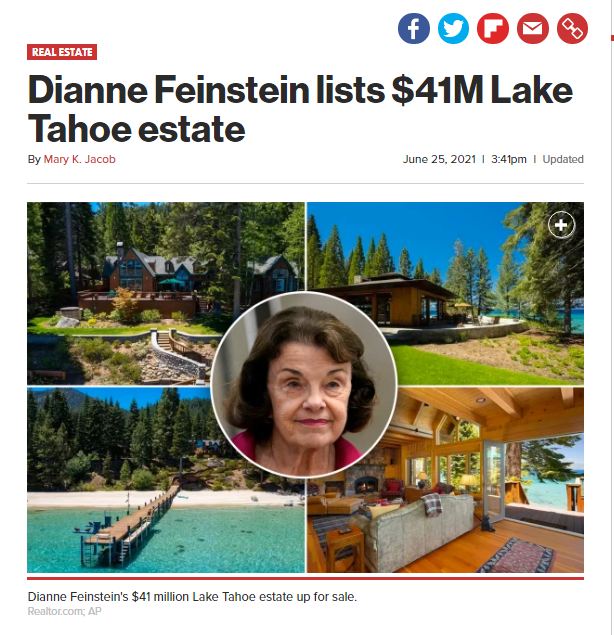 I find it really amazing how these Democrats constantly preach fairness, equality and the rich are the blame for everything, yet people like Dianne Feinstein have just listed her $41M Lake Tahoe estate for sale. Their spouse is always extraordinarily lucky in deals that somehow connect back to political favors. Sen. Dianne Feinstein’s husband was named in the College Admissions Scandal. Her husband, Richard Blum, benefited from being involved with a company to sell United States Postal Service property. The company, CBRE Group, won a contract to sell postal facilities. Blum is its board chairman and owns an investment firm that holds an interest in its stock. The question has always been; did he get inside information and preferential treatment in what they called a competitive bid. In the real world, when my son was in college and getting just a summer job at a brokerage firm to learn the business, the entire family had to reveal what stocks they owned right down to my mother just to get a summer job. Politician’s families never reveal anything of that nature.

DianneDinane herself was employing a Chinese spy. There is never any accountability and nobody ever asks, how in the world do politicians have such wealth and they never worked in the private sector?

Trending:
See also  I don't even know what that is confused' and 'angry' Dem Senator Dianne Feinstein, said when briefed to fund avoiding shutdown
Views: 12