Disney is overvalued at $105. It has fallen 30% from its highs however, with projected earnings per share and with uncertainty about when they will realistically be able to open and what kind of demand will be there for them when they do means this company should probably suffer another 30-50% drop from where it is. 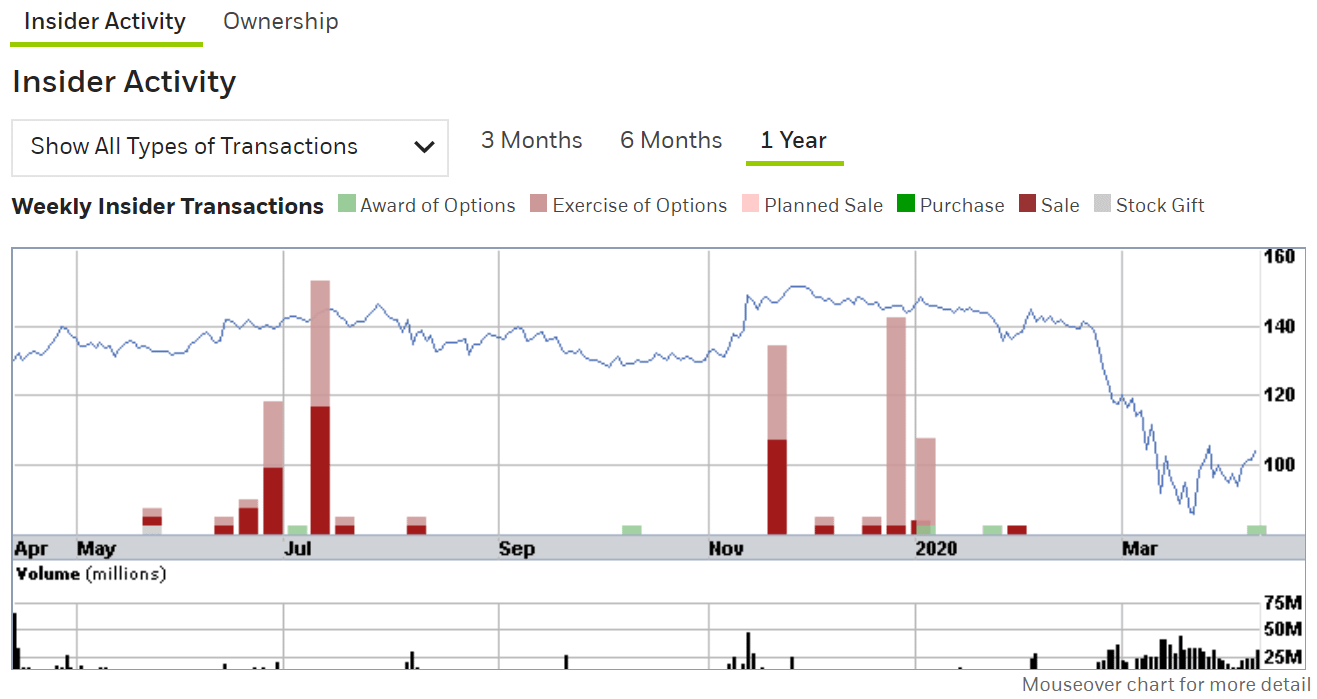 Insider trading activity reveals a lot of selling throughout last year whenever the stock price was above $140. Former CEO Bob Iger went on a spending spree for many years, buying Pixar, Marvel, Lucasfilm, Fox, etc. They have 44 billion in debt on their books, and even when revenues were high people were unsure if this was too risky. In fact Bob Iger was forced to step back from the CEO role earlier this year largely due to the concerns that he had overspent and left the company vulnerable. This was all before CV. Now with their theme parks and cruise lines closed, and their movies unable to be played in theaters, their only source of revenue is the fledgling Disney+ service that is not estimated to turn a profit on its initial investment for 4 years. When theaters open back up, a years worth of movies from all studios will be crammed into the back half of the year, causing loss of profits due to competition. There will also be lowered demand for their parks, movies, and cruises due to less discretionary spending, and a public less willing to hang out in large crowds for fear of a second wave of virus outbreaks. 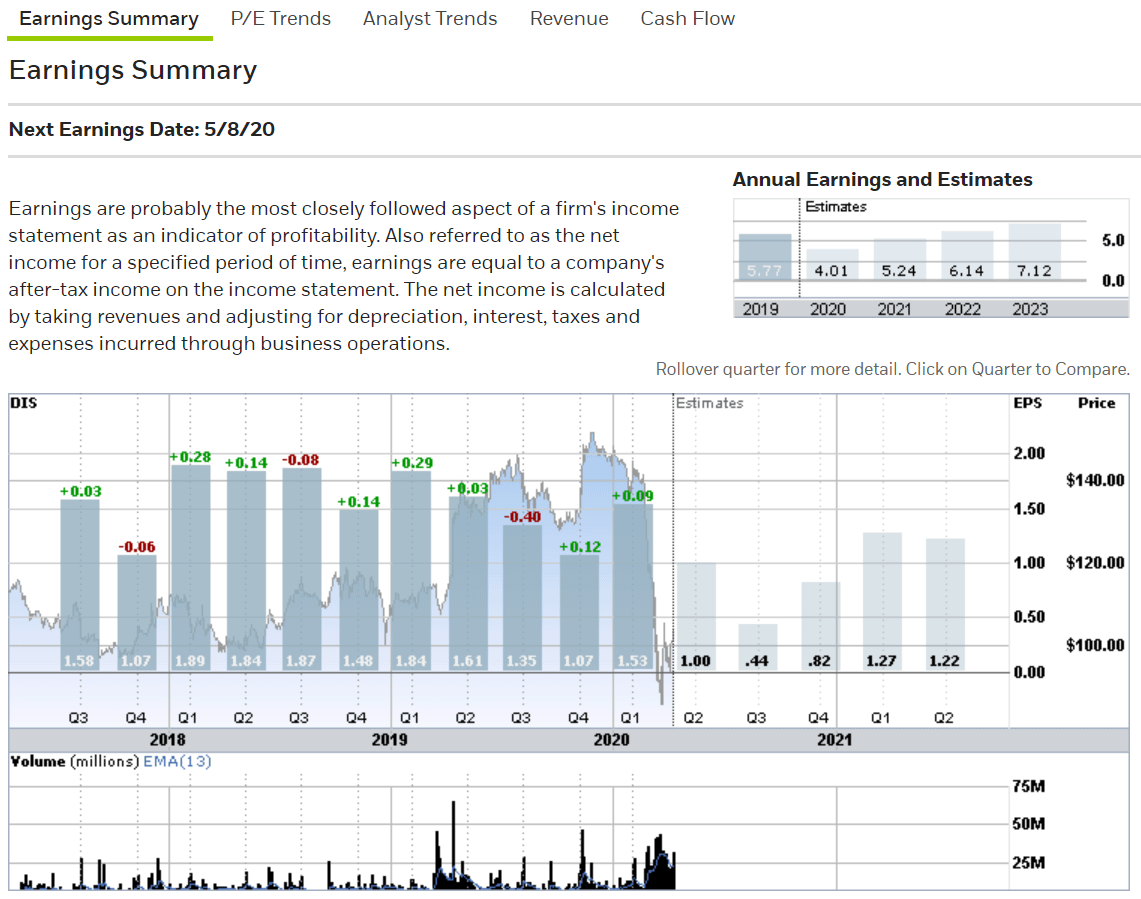 Earnings projections keep being revised lower. Q2 looks bad and when they announce those earnings next month they will also have to face projections for Q3 being the worst quarter in recent history. I don’t believe any of these estimates for Q2 and Q3 will be met, because these projections assume Disney parks will reopen June 1st, a prospect that does not seem belieable if many US states are not projected to peak in infections until mid May. Even if they reopen as soon as they’d like, both domestic and international visitors will be historically low because who wants to go stand in lines next to visitors from every corner of the globe at a time like this? If cruise lines have become plague ships, trips to Disney parks have become epidemic excursions. 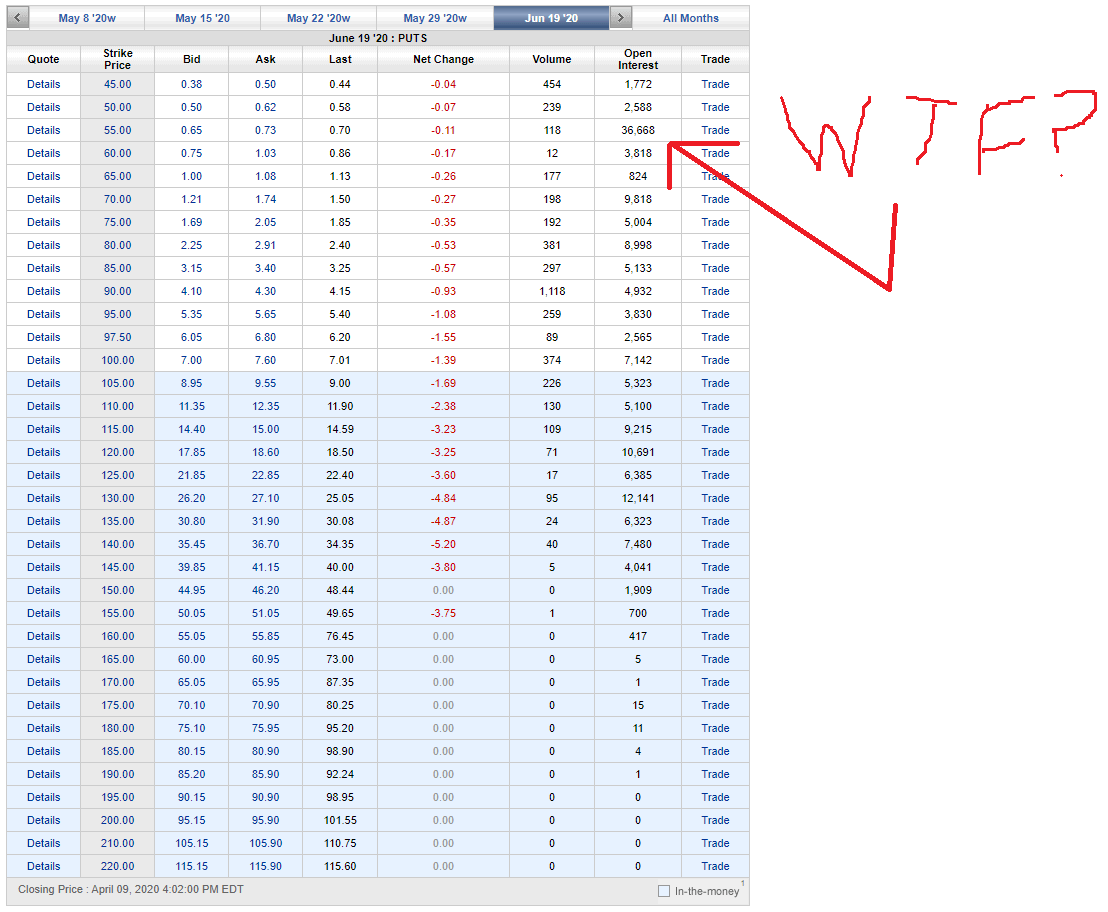 Looking at options open interest a strange anomaly appears on the June 19 2020 put contracts at a 55 strike price. I understand the people buying these puts are YOLOers, likely from this forum. They are degenerates of the highest order…but let’s consider who is selling them. Some group of individuals or institutions have put nearly a quarter billion dollars aside to secure these puts in preparation to buy Disney stock if it drops to 55 dollars a share by mid June.

Disney may well drop to that level if the earnings are as bad as some analysts are speculating. Even the projected earnings listed above would put the company at $75 per share to maintain its current (and already high) P/E ratio.

This means Disney will likely be unable to maintain $105 per share. $75 is more realistic, and even $55 is realistic if it coincides with a larger drop in the overall market. Many of you hold puts on the S&P, but I wonder if that is the best way to play this market. The S&P contains many companies across many sectors, including healthcare and technology that are not being as negatively affected by current market conditions as others. Disney on the other hand, was already under performing the S&P before the crash, is still under performing now during this rally, and is uniquely vulnerable to the virus, to extended lockdowns, and to lowered consumer spending. This is not currently reflected in it’s stock price. Since it is a non-essential company in a discretionary industry is also not likely to benefit as much as other companies from JPow’s printer going brrrrrr. 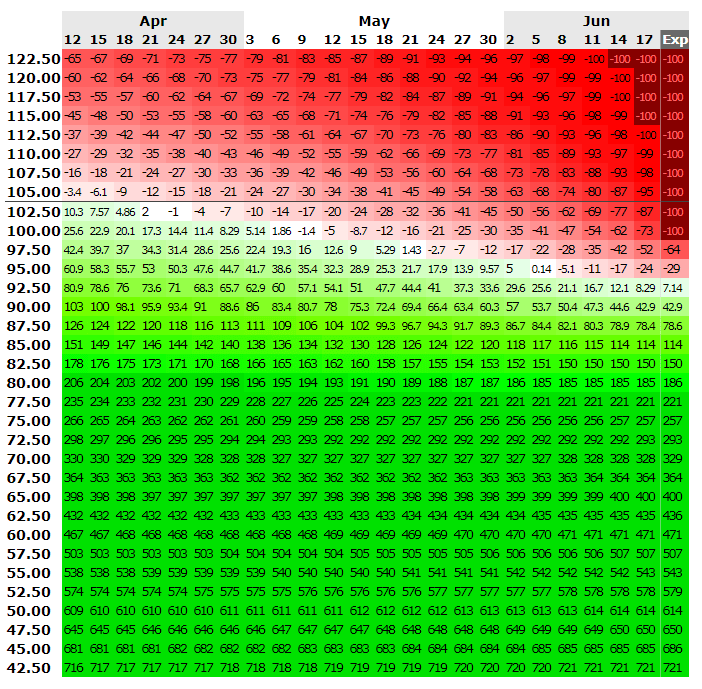 Good sirs and sirettes of this fine gambling establishment, I propose to you a trade. June 19, 2020 $100 strike puts. If DIS closes even in the mid 90s on June 19th, you will have lost nothing. If it closes at the likely $75 dollar mark you stand to make a 250% profit, and if it the dream scenario plays out and it drops to $55, a profit of over 500% will be yours. Every 10k you put into this trade could become 30-60 thousand dollars.

Gentlemen, what say you to this strategery?