Borrowing a quarter of the nation’s entire economic output every year to prop up an ineffective, corrupt status quo is putting a Band-Aid over a tumor.

If we misdiagnose the disease, our treatment won’t work. We’re all familiar with medical misdiagnoses, which lead to procedures and prescriptions that can’t possibly fix the patient’s illness because the source has been missed or misinterpreted.

Medical diagnoses are often tricky, as many general symptoms can arise from a variety of sources.

Social and economic ills can also be tricky to diagnose, and the diagnosis is hindered by political polarization and sacrosanct orthodoxies which make it difficult to have a rational discussion in public about many difficult issues.

If we can’t even discuss a problem, then that creates another problem, because problems that can’t be discussed openly cannot be solved.

There’s also a human tendency to choose the diagnosis with the easiest-at-hand solution. This allows us to quickly apply an approved solution and then declare the problem solved.

The current flood of financial stimulus is an example of this misdiagnosis and application of an easy solution which fails to address the underlying disorder.

The conventional diagnosis of the post-pandemic economy is that the only problem is people don’t have enough money, and so giving them money to spend will cure the financial damage the pandemic inflicted. (Never mind that the economy was rolling over in 2019 long before the pandemic, which served as a catalyst in a sick, unstable status quo.)

Creating $1.9 trillion out of thin air and distributing it is painless: who doesn’t like free money? But is a scarcity of cash the source of America’s economic malaise?

Yet as I discussed in my blog post on the velocity of money, Our Dead Money Economy, as the money supply expands in a parabolic fashion, the frequency that all this new money is changing hands (money velocity) is in a free-fall to historic lows.

Simply put, much of this money is either being saved (“hoarded” to economists who want us all to spend every dime of it), applied to debts outstanding (back rent, credit cards, etc.) or sent overseas for imported goods.

There is no guarantee that all this stimulus will generate the jobs, new enterprises, profits and tax revenues that are anticipated.

Distributing stimulus money and expecting this solution to fix America’s economic malaise is akin to applying a Band-Aid over a tumor. It may well hide the problem but it cannot heal the disorder or save the patient.

Agency is control of one’s life and having a say in community/public decisions and having some control and power over one’s circumstances.

When these three are distributed asymmetrically, where the majority of the resources, capital and power are distributed to an elite, the society and economy are imbalanced and prone to stagnation and eventual discord.

The statistics are unequivocal: income-wealth inequality in the U.S. continues reaching new heights. This is reflected in asymmetric access to healthcare and other resources, asymmetric ownership of income-producing capital and limited agency. ( Trends in Income From 1975 to 2018)

The bottom 90% of the U.S. economy has been decapitalized: debt has been substituted for capital. Capital only flows into the increasingly centralized top tier, which owns and profits from the rising tide of debt that’s been keeping the bottom 90% afloat for the past 20 years.

As I’ve often observed here, globalization and financialization have richly rewarded the top 0.1% and the top 5% technocrat class that serves the New Nobility’s interests. Everyone else has been been reduced to a powerless peasantry of debt-serfs who rely on lotteries and playing the stock market casino or hoping their mortgaged house on the Left or Right coasts doubles in value, even as the entire value proposition for living in a congested urban sprawl vanishes.

America has no plan to reverse this destructive tide of Neofeudal Pillage. Our leadership’s “plan” is benign neglect: just send a monthly stimulus of bread and circuses (the technocrat term is Universal Basic Income UBI) to all the disempowered, decapitalized households so they can stay out of trouble and not hinder the New Nobility’s pillaging of America and the planet.

The bottom 90% of American households receive a mere 3% of capital-generated income. That 3% might as well be 1% or 0.1%–it’s inconsequential.

READ  Hunter Biden says on with Jimmy Kimmel that his laptop is a "red herring" and that he really does not know if it's his: "I don't know is the answer."

As for agency: Martin Gilens of Princeton University and Benjamin Page of Northwestern University are the authors of the study “Testing Theories of American Politics: Elites, Interest Groups, and Average Citizens.”

Professor Gilens gave this brief summary of their conclusions:

“I’d say that contrary to what decades of political science research might lead you to believe, ordinary citizens have virtually no influence over what their government does in the United States. And economic elites and interest groups, especially those representing business, have a substantial degree of influence. Government policy-making over the last few decades reflects the preferences of those groups — of economic elites and of organized interests.” (Source: Foreign Affairs, January 2021, Monopoly Versus Democracy)

That is as definitive as soaring income-wealth inequality. Both are inherently destabilizing.

Meanwhile, central bankers, monopolists and the politicos whose campaigns are funded by monopolists are all frantically trying to convince us their Band-Aid will heal the metastasizing tumor consuming America. And if it doesn’t, well, it was inevitable that the central banks would boost the wealth of the top 0.1% and leave the bottom 90% spiraling into the abyss; we really can’t stop “technology” (heh) or “capitalism” (heh-heh). Consider this excerpt from the article:

“…high-tech monopolists (pursue) a strategy of encouraging people to see immense inequality as a tragic but unavoidable consequence of capitalism and technological change. But as Lynn shows, one of the main differences between then and now is that, compared to today, fewer Americans accepted such rationalizations during the Gilded Age. Today, Americans tend to see grotesque accumulations of wealth and power as normal. Back then, a critical mass of Americans refused to do so, and they waged a decades-long fight for a fair and democratic society.”

Distributing “free money” (much of which goes to favored industries and cartels) is a Band-Aid over the metastasizing tumor of perversely imbalanced distributions of resources, capital and agency/power.

If America cannot bear to discuss these realities (and structural solutions– yes, there are solutions) openly, they will unravel the social, economic and political orders in a non-linear Cultural Revolution with a highly uncertain outcome.

Borrowing a quarter of the nation’s entire economic output every year to prop up an ineffective, corrupt status quo is putting a Band-Aid over a tumor. 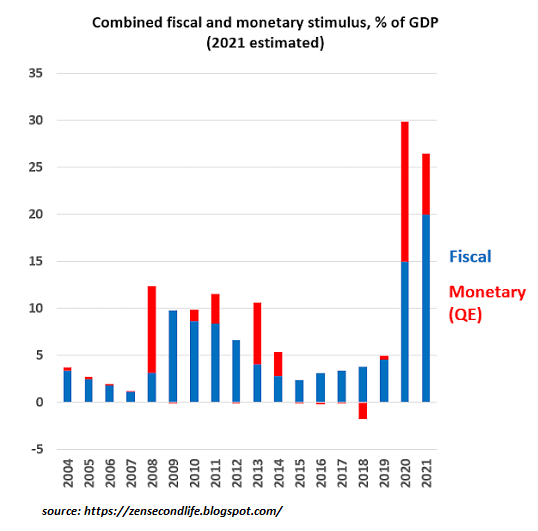 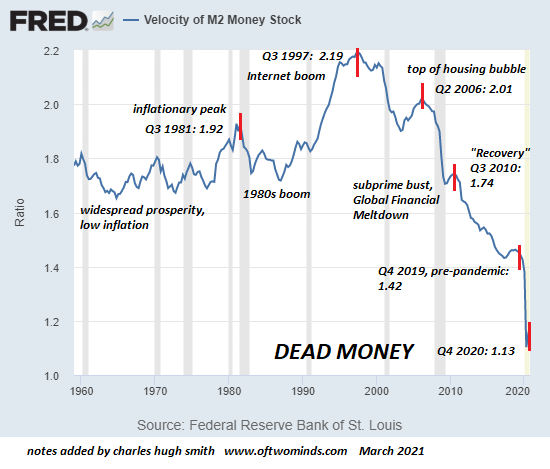