by Umar Farooq
We have seen an unrelenting surge in the stock market after President Trump’s took oath of the office. The primary reason behind this rally has been expectations for fast-track economic growth with fewer regulations and more pro-growth fiscal policies to be unleashed by the new administration. But a potential red flag has surfaced in recent weeks that is casting doubts on the sustainability of the recent stock advance. The bond market is also showing increasing signs of strength, which to many contradicts the stock market advance as it reflects an investor flight to safety. The recent surge in Stock market is contradicted by investors’ flight to the safety zone of bond market. 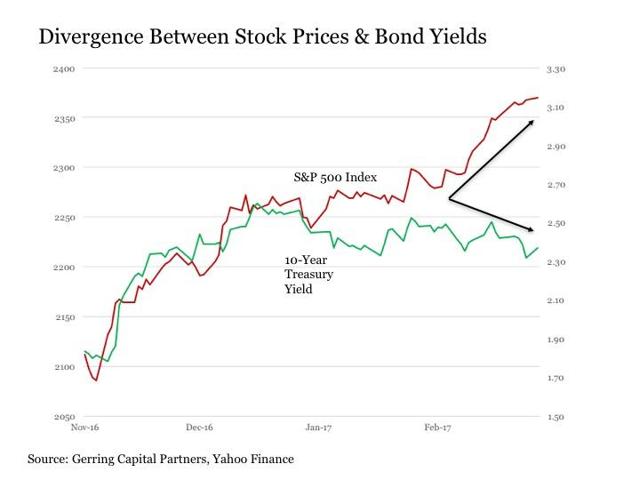 Source: seekingalpha
One theory for the stock-bond disconnect is bond investors believe Trump’s fiscal stimulus plans might be delayed or not as big as previously believed, Andrew Hunter at Capital Economics says. The U.S. Federal Reserve, these bond pros say, might not need to be as aggressive with interest rate hikes. And that prompts the question: If the “Trump bump” isn’t going to be as powerful as forecast, why is the stock market still surging?

The recent deviation between the still rising stock market and bond yields that first peaked all the way back in mid-December and have been moving sideways if not working their way lower since provides further confirmation to many investors of a potentially spreading fundamental disconnect that will require resolution either with stocks falling or bonds rising before it is all said and done.

While it may seem counterintuitive when thinking about it qualitatively, who said that stocks and bonds cannot move higher at the same time? Consider the price performance of the S&P 500 Index and the iShares 7-10 Year Treasury Bond ETF dating back to 2009. Over the past eight years, both have performed well despite the success of the other. Such are the wonders of a market that is completely flooded with central bank liquidity, as investors will buy up just about everything in sight. 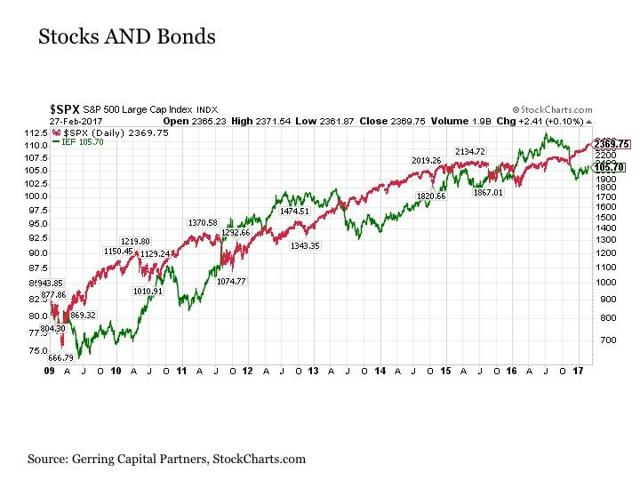 Source: seekingalpha
The mainstream financial media likes to repeatedly cite the narrative that the sell-off in bonds during the post-election period was a reflection of investors rotating out of bonds and into stocks amid optimism about the pro-growth policies that were set to come with the new administration. As a result, with bonds now increasingly on the mend, the narrative subsequently and understandably evolves that investors are now rotating back into bonds amid concerns about the sustainability of the stock rally and the pace of fiscal policy changes out of Washington. The only problem with these narratives is that none are true in any substantive way.

Bottom line is that the recent strength of the bond market and the deviation of stock prices from Treasury yields should not be viewed as an alarming sign for stocks. Both asset classes have demonstrated the ability to rise over long-term periods of time. And the drivers of the recent bond market rally are not a reflection of a suddenly renewed need by investors to flee to safety out of stocks. Instead, it is the continued transition from a period a few months ago when a major foreign holder of Treasuries needed to raise cash to fight their own domestic challenges. In short, the recent rise in bond prices and associated decline in bond yields have little to nothing to do with the stock market. Both stocks and bonds can rise together, and investors should anticipate that both may continue to do so over the short term and into the intermediate term.

747 views
READ  This Asset’s Outperformed The Stock Market For 20 Years (And Likely Will This Year Too)
READ  Major inflows, near-record sentiment, analysts chasing the market rally