Skip to content ﻿
Facebook Twitter Telegram Email
READ  This is clear example of the liquidity trap. They should study their God Keyness a bit better. If you cut your rates too low, your monetary policies become impotent..

The Centers for Disease Control and Prevention (CDC) has projected in a worst-case scenario that up to 65 percent of Americans could be infected with coronavirus.

According to The New York Times, a closed-door meeting was held last month among CDC officials and dozens of epidemic experts from around the world.

One of the CDC’s leading epidemiologists presented four scenarios – named A, B, C and D – to show possible ways the virus could spread throughout the US population.

The federal health agency projects that in the worst-case scenario, between 160 million and 214 million people would be sickened.

READ  IT NEVER ENDS: How many doses of vaccine will be pushed for every new coronavirus mutation?

In a projection, even if interventions started today – such as drive-thru testing and barring visitors from nursing homes – as many as three million Americans might fall ill. 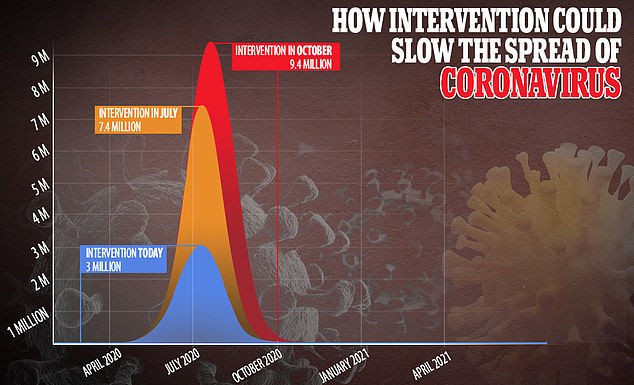 The CDC held a meeting last month in which different scenarios were presented of ways coronavirus could spread throughout the US.  This graph shows an estimate of the peak number of cases that would occur if interventions such as banning gatherings and shutting schools took place today, in July 2020 and in October 2020