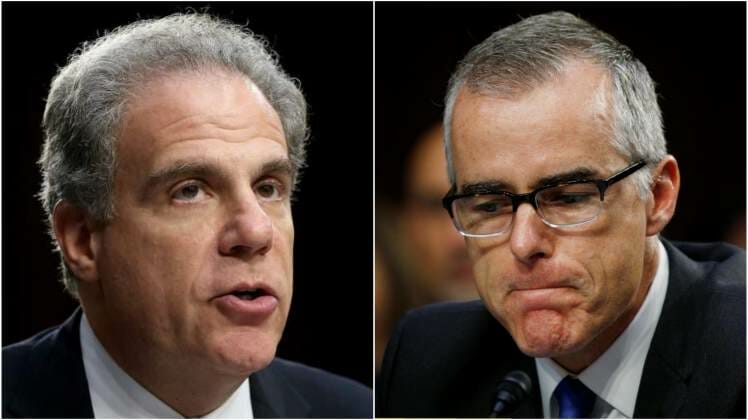 According to multiple reports on Thursday, it looks like the swamp is finally getting drained, or at least partially. More precisely, we’ve just learned that former FBI Deputy Director Andrew McCabe has been referred by the Department of Justice’s Office of the Inspector General to the US Attorney’s Office for the District of Columbia for criminal prosecution. Andrew McCabe was fired by AG Jeff Sessions just a couple of days before his retirement, but now the word on the street is that former FBI deputy director lied to investigators with regard to the leaks to the MSM, as per an investigation conducted by Inspector General Michael Horowitz last month. The thing is, the report mentions at least three instances in which Andrew McCabe lied to investigators, and on Thursday, a Washington Post article explains why McCabe has a serious problem, i.e. the referral made by the Department of Justice may very well result in criminal charges against him.

That would explain why Andrew McCabe managed to raise (after his firing) almost 400,000 dollars from “never-Trumpers” for his future legal defense fund, which means he anticipated he’ll be hit with criminal prosecution by the DOJ one month in advance. It’s also interesting to mention that the DOJ inspector general who has made the criminal referral for McCabe is an Obama appointee.

See also  Former Vice President Biden admits he has handlers for literally everything he does. This is out of control.

McCabe threatened to “take people down with him” if he was fired. We of course look forward to the fireworks. I hope they turn him and he squeals on Lynch, Comey, Yates, and all other deep state crap that infests that agency. We already suspect a number of people still within the DOJ and FBI are cooperating, the likes of Ohr, Page, Strzok, Baker, Priestap. Can’t wait for the OIG report, it’s gonna be yuuuge!

It’s time for a nice leftist and corruption bloodbath. Did you see what Laura Loomer said? Cracked me up, it was awesome. Comey is next!!! Yesterday she was at that book signing and took Comey apart in front of his adoring leftist fans with Russia, Russia, Russia in their deluded eyes. The dominoes are falling, and soon even Hillary may get a taste; and we’d have that if only we had a real AG instead of Sessions. Laura had to be escorted out of the book signing, leaving Comey looking like the fool that he is.

Comey is pissing in his pants right about now. You see how McCabe’s lawyer is now calling Comey a liar, as they are in competition to out lie each other. The left is crumbling and right now even Obama is scared. This is one of the reasons he spends most of his time outside the US. He is afraid of being served papers to testify since he is the ultimate target.

God, I wish we had Giuliani as the AG; Sessions is indeed a damned turtle. However, I think Trump would fire Sessions if he felt he wasn’t doing his job. There’s gotta be something going on behind the scenes. On the good side, the latest news is that Rudy is joining the team of our President’s lawyers. A big plus as I see it.