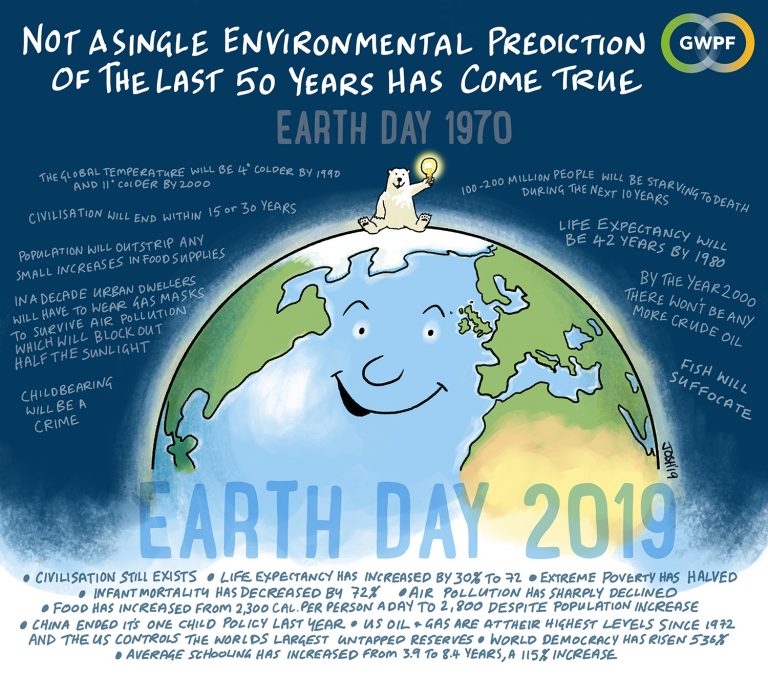 We should be thankful that the gloom-and-doom predictions made throughout the past several decades haven’t come true. Fear-mongering about explosive population growth, food crises and the imminent depletion of natural resources have been a staple of Earth Day events since 1970. And the common thread among them is that they’ve stirred up a lot more emotions than facts.

“By the year 2000, if present trends continue, we will be using up crude oil at such a rate … that there won’t be any more crude oil,” ecologist Kenneth Watt warned around the time of the first Earth Day event. “You’ll drive up to the pump and say, ‘Fill ’er up, buddy,’ and he’ll say, ‘I am very sorry, there isn’t any.’” Watt also warned of global cooling and nitrogen buildup rendering all of the planet’s land unusable.

Environmental Protection Agency’s latest air quality trends report, the combined emissions of the six common air pollutants have decreased 73 percent between 1970 and 2017.
Nations data show extreme poverty and global hunger has noticeably dropped since 1970. And according to the International Energy Agency, the number of people without access to electricity fell to below 1 billion people for the first time.

Catastrophic but unlikely gloom-and-doom predictions will continue to grab media headlines, but free societies with the protection of property rights are tried and true pathways to a healthier, cleaner world. As we reflect on the progress we’ve made as a free society, let’s celebrate and be thankful.

Empirical Evidence Shows Temperature Increases Before CO2 in ALL Records:

The question is how does the Intergovernmental Panel on Climate Change (IPCC) determine that an increase in atmospheric CO2 causes an increase in global temperature? The answer is they assumed it was the case and confirmed it by increasing CO2 levels in their computer climate models and the temperature went up. Science must overlook the fact that they wrote the computer code that told the computer to increase temperature with a CO2 increase. Science must ask if that sequence is confirmed by empirical evidence? Some scientists did that and found the empirical evidence showed it was not true. Why isn’t this central to all debate about anthropogenic global warming?

The most important assumption behind the hypothesis that human activities are causing global warming is that an increase in global atmospheric CO2 will cause an increase in the average annual global temperature. The assumption became almost the total focus of the IPCC because of the definition of climate change given them by the United Nations Framework Convention on Climate Change (UNFCCC).

The definition predetermined the method and procedure of the IPCC, which in turn, eliminated a logical scientific approach to consider human impact on climate and climate change in the larger context of natural, that is without the human portion, climate, and climate change. The definition and the structure of the IPCC excluded the scientific method, which requires the hypothesis be disproved. Instead, everything was done to prove the hypothesis. The definition did not allow for consideration of a null hypothesis. The structure accepted the very limited, untested, conclusion of Working Group (WG) I as the basis for the research done by Working Groups II and III. This means WG II only considered the negative impact of warming. They did not consider the positive impact of warming, nor the possibility of global cooling. As a result, WG III only offered policies and remedial actions on the negative impact of global warming.
In 1999 the first significant long term Antarctic ice core record appeared. Earlier cores were in the record, but as I recall, the one by Petit, Raynaud, and Lorius were presented as the best representation of temperature, CO2, and deuterium over 420,000-year core drilled to 3623 meters. I recall Lorius warning people not to rush to judgment. One of his concerns was the size of the graph depicting such a long record. Lorius reconfirmed this position in a 2007 article.

READ  Stop giving money to Republicans until they address Big Tech censorship. Not a single penny.

“…our [East Antarctica, Dome C] ice core shows no indication that greenhouse gases have played a key role in such a coupling [with radiative forcing]”