The US, Europe, and most of the developed world on are the road to Japanification. The rest of us will begin to look like Japan with its astronomical deficits and ultra-dovish monetary policy.

We will see financial repression, ever increasing deficits, slower growth, etc. This is not the end of the world. It’s not the best world, either, but we’ve gone too far to come back now.

There are not enough voters for any of the things that would balance the US budget. Neither party wants to reduce the deficit, and MMT fans want to make it even bigger.

That means the rules of investing we’ve known over the last 50 years are likely to change.

Could we actually see Modern Monetary Theory in the US?

In theory, it is possible for the Treasury Department to issue zero maturity, zero interest bonds to the Fed, and then deposit dollars into the Treasury bank account.

This would, at a minimum, create inflation and possibly hyperinflation. To say it would be destructive is like comparing an ocean breeze to a category five hurricane. It would, in fact, be a financial disaster of biblical proportions.

I don’t believe it will happen that way, though. We will instead run up debt the old-fashioned way: Japanification and massive amounts of quantitative easing. Let’s look at how that might play out.

The graph below shows the deficit as a percentage of GDP, both in the past and in the forecast for the next 10 years. (You can see the underlying CBO report here.) 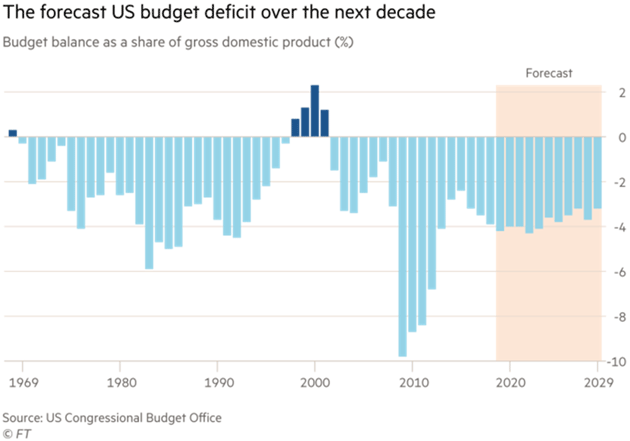 Given the GDP is well over $20 trillion now and continues to grow, this chart visually understates the reality of growing deficits.

Let’s look at another helpful chart, which actually shows the dollar amount of the projected deficits. 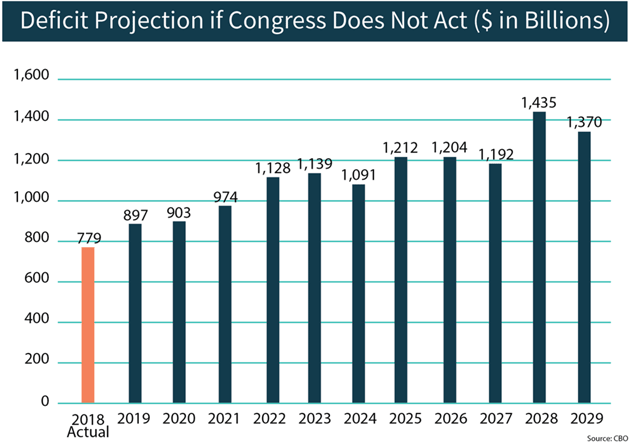 In all, the projection is an average annual deficit of $1.2 trillion per year for the next 10 years.

Projections Play Down the Grim Reality

There are a few caveats.

First, let’s assume away the real world. To give the CBO their due, they only assume 2.3% GDP growth, very mild unemployment growth, and roughly 2% inflation.

But here’s the kicker. Well, actually there are two.

If there is a recession (and there will eventually be one), we will reach that $40 trillion number sooner, sometime in 2026 through 2028. The deficit in a recession will be a minimum of $2 trillion per year and maybe much higher than those suggested above.

There will be proposals to reduce spending, but they won’t make much difference. “Mandatory” spending (Medicare, Social Security, and other entitlement programs, plus interest on the debt) plus defense spending overwhelm so-called “discretionary” spending.

Here’s the CBO chart (again in terms of GDP because the absolute numbers would scare you).

Even if we could cut some discretionary spending, the deficit would still be huge as there is no constituency for cutting entitlement programs.

The question is, where will we get the money to pay for this spending?

An Inflationary World Ahead

Answer: The Treasury Department will sell bonds and run up the debt. That’s a given.

Then there will be a recession. The Fed will take interest rates down to zero and pursue unprecedented amounts of quantitative easing… just like Japan has done.

Again, this isn’t the end of the world, at least if we pursue it that way. Full-on MMT would be much, much worse.

If I seriously expected it, I would be preparing to ride out a hyperinflation scenario. But I do not think that will happen.

Is it possible? Sure. The most dangerous thing for investors is to not imagine what could go wrong with their basic thesis (hat tip Ben Hunt).

Right now, my base case is for a more or less deflationary world.