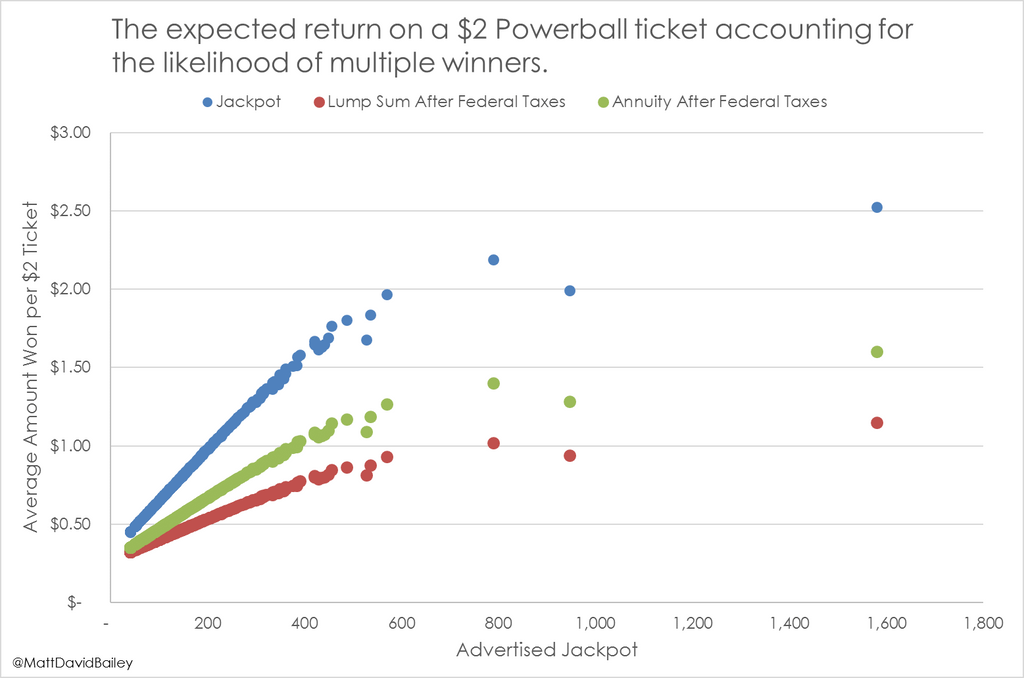 (source) www.lottoreport.com/ticketcomparison.htm Powerball tickets sold and advertised jackpots from after the rule change (2015-today). I couldn’t find data for the number of winning tickets per draw.

(tools) MS Excel and probability. I still use the Poisson distribution to predict the number of winners based on the actual tickets sold for that drawing (each point is an actual drawing). This assumes that the numbers played are uniformly distributed. In reality, many more of the same numbers are played (birthdays, etc.).

After the response to my graph using a model of ticket sales from old data (pre-rules change), I thought I should update it and correct it for data I didn’t have at the time! I updated this to use the actual number of tickets sold for each jackpot after the rule change. Interestingly, you can see that the peak sales of that $600M were not matched in later times (those high hysteria sales created the dropin expected return observed). After a half-billion dollar jackpot was no longer as big of a deal, the news coverage and ticket sales weren’t as extreme, so the expected return was actually higher due to the lower ticket sales.

There was one $1.6 billion jackpot on January 13th, 2016 and ticket sales were 635 million. My previous model assumed a much, much higher ticket sales (the standard risk of regression). This was a flaw noted by eripmave. I like the “story” of the other chart better, but the good news is that if you’re are going to buy, buy now! The interesting dip down is not so apparent, but it’s still there around $500M.

READ  Trump hints at Return; Blasts: "What did Dr. Fauci know about 'gain of function' research, and when did he know it?"

I also added the actual jackpot and annuity with taxes numbers based on previous comments.