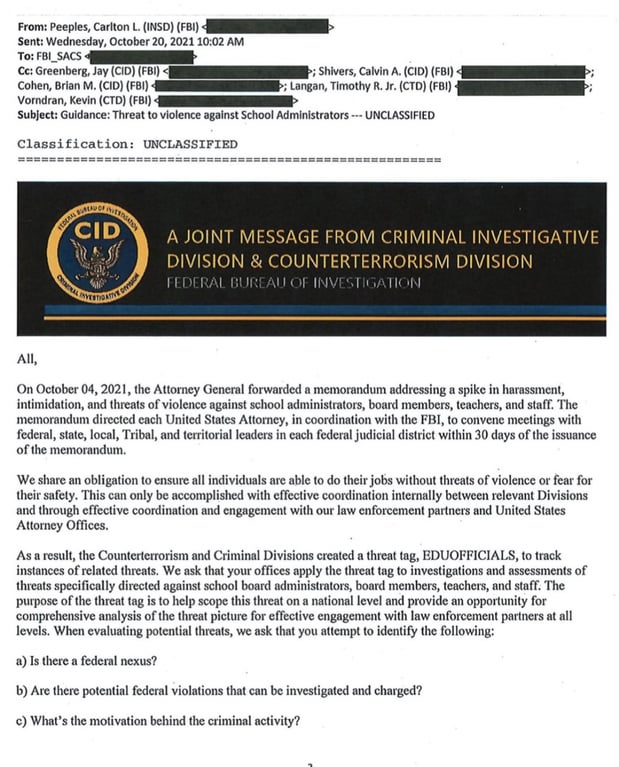 “Garland defends decision to mobilize FBI agents against threats to school board members. :

The attorney general also rejected the characterization that he was labeling parents as domestic terrorists and trying to silence their concerns. Instead, he said, this is the process the Justice Department follows when it addresses similar situations of mounting violent threats against members of Congress and others.

House Republicans are demanding answers from Attorney General Merrick Garland and the FBI about actions the DOJ has taken to carry out his divisive school board memo, which followed a since-withdrawn National School Boards Association letter referring to parent protesters as domestic terrorists.

Garland revealed last month that the DOJ and the White House communicated about the September NSBA letter just before he issued his memo. The NSBA letter urged the DOJ to look into deploying the PATRIOT Act against protesting parents. Garland’s memo directed the FBI “to convene meetings with federal, state, local, Tribal, and territorial leaders in each federal judicial district” to help “open dedicated lines of communication for threat reporting, assessment, and response.”

According to the Attorney General’s memorandum, the Justice Department will launch a series of additional efforts in the coming days designed to address the rise in criminal conduct directed toward school personnel. Those efforts are expected to include the creation of a task force, consisting of representatives from the department’s Criminal Division, National Security Division, Civil Rights Division, the Executive Office for U.S. Attorneys, the FBI, the Community Relations Service and the Office of Justice Programs, to determine how federal enforcement tools can be used to prosecute these crimes, and ways to assist state, Tribal, territorial and local law enforcement where threats of violence may not constitute federal crimes.

The Justice Department will also create specialized training and guidance for local school boards and school administrators. This training will help school board members and other potential victims understand the type of behavior that constitutes threats, how to report threatening conduct to the appropriate law enforcement agencies, and how to capture and preserve evidence of threatening conduct to aid in the investigation and prosecution of these crimes.