Spending money on research and development is a funny thing. It’s hard to tell what’s going to be a success, and sometimes the results aren’t valuable for decades. For example, Uber is investing heavily in driverless cars with the explicit goal of revolutionizing transportation. Even if the results aren’t always successful we’re convinced R&D investments are a leading indicator of long term economic strength. 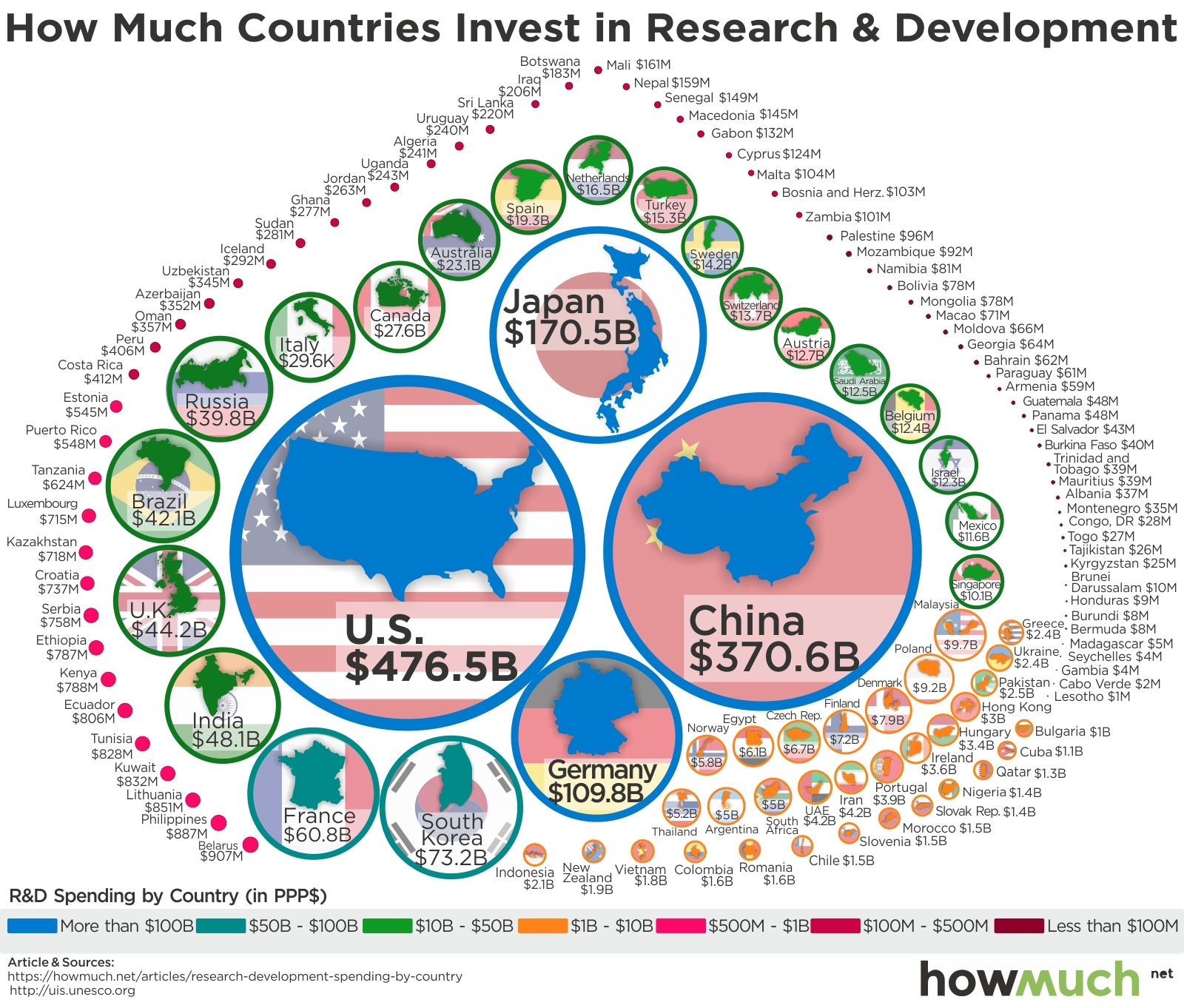 We found the numbers for our visualization thanks to the UNESCO Institute for Statistics, which collected the data through a series of smaller regional surveys. UNESCO adjusted the figures to reflect purchasing power parity (PPP$), which makes it possible to compare amounts from country to country. The numbers include government, private, academic and non-profit investments into research and development, painting a complete picture of the R&D market across the world. We created our visualization by combining a bubble map with both an outline of the country and its flag; we also color-coded and grouped together countries based on their financial outlay. The result is a beautiful snapshot of a critical component for economic growth.

Top 10 Countries Investing the Most Money in Research and Development

The first and most obvious trend in out visualization is how top-heavy R&D investments are. You can easily see this just by glancing at the visualization. See how large the inner circles are compared to the rest of the visual? Try to count how many tiny red dots exist on the far exterior. Our graphic makes it easy to judge which countries are on the top (and bottom) of the R&D market.

In fact, 10 countries account for about 80% of the entire world’s outlay. The U.S. is far above and beyond the rest of the globe, contributing more than $100B than second-place China. Drilling further into UNESCO’s data reveals another leading indicator: whereas the U.S. employs 4,295 researchers per million inhabitants, China only has 1,096. Of course, China is home to a lot more people than the U.S., but the American dominance over the R&D market is clear, accounting for 27% of the entire global expenditure. That is significantly more than the bottom 100 countries combined.

READ  Obama lifted ban on gain of function research 11 days prior to Trump taking office. Its a Plandemic period.

Keep in mind that R&D involves a wide variety of different industries. Our figures include expenditures for everything from artificial intelligence research, to inventing new pharmaceutical drugs, to building cutting-edge fighter jets. Political scientists say that demography is destiny for winning elections. We think investment in research and development predicts how countries develop over the long term. Judging by our visualization, it’s clear that the U.S. and China will continue to be locked in an ongoing standoff for economic control over the rest of the world.