My heart sank when CNN reported that Flock Safety had created a national license plate tracking program. Flock Safetys’ business model has been profiting from peoples’ fears about crime for years.

Flock Safety has turned fear and suspicion into a national business model, where anyone and everyone is a suspect.

“Flock Safety, which makes a license plate reader, announced the Total Analytics Law Officers Network, or TALON. The network looks to connect the 400 law enforcement agencies using its cameras, allowing agencies that opt in to view camera data from other regions.”

“The company said it has cameras in 700 cities, essentially creating a nationwide camera network for tracking car movements if they’re all connected.”

It is hard to put into words how disgusted I feel about private corporations using fear to justify tracking everyone, so I will let Flock Safety explain it.

“TALON – the Total Analytics Law Officer’s Network is the only ethically-designed local and national network of ALPRs for law enforcement officers.” 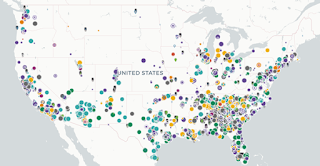 Flock Safety’s explanation of how TALON is “ethically-designed” to surveil the entire country is mind-boggling.

“Flock Safety was founded with two core beliefs: 1. it’s possible to leverage technology to eliminate crime and 2. it’s possible to build technology within an ethical framework that protects privacy. Like our core products, all the vehicle data in TALON automatically, and by default, deletes every 30 days on a rolling basis, unless under subpoena or a democratically elected governing body legislates a different retention period.”

1.) Flock Safety wants Americans to believe that creating a national license plate tracking network will eliminate crime. But the fact is, Americans have been experiencing near record low crime rates for years. USA Today said, “the United States is safer than it has been for as far back as many Americans can remember.”

All of this without the need for a national license plate tracking network.

2.) Flock Safety claims all data automatically deletes by default every 30 days, except it does not. If Flock Safety receives a subpoena from a democratically elected governing body. i.e., law enforcement or a bird of prey, their “ethically-designed” data will reappear.

So the reality is, no one’s license plate data is really safe from TALON’s surveillance.

Some of the recommendations include things like public input and turning off immigration-related alerts from Fusion Centers. But two recommendations that really stuck out were how vendors (law enforcement) can adjust alerts or hot lists “for reasons that concern the agency and community.”

Essentially what Flock Safety is saying is law enforcement will probably use their license plate tracking system to target immigrants and hot list anyone they want, despite a disclaimer forbidding them from doing just that.

The second recommendation is that “Flock Safety does not own the footage. Our customers do.” Meaning if law enforcement uses TALON to track innocent people it’s not their fault because they do not retain any rights to the data. Flock Safety gets my vote for “best doublespeak of 2020.”

Does anyone other than Flock Safety think that their partnership with TASER is ethical?

To call a national tracking network “ethically-designed” is misleading and repugnant to everyone who still values their privacy.

How could a Flock Safety/AXON national tracking program be abused?

Don’t want to be tracked 24/7 by TALON? That’s a Tasing. Refuse to answer a bird of prey’s questions about where you came from or where you a going? That’s a Tasing. Ask TALON to delete your license plate data: that’s a Tasing. I could go on and on, but the reality of private corporations and law enforcement working together to create national tracking programs is too disturbing to imagine.