Does anyone see a problem here? This restriction of speech “prohibits discrimination in Florida K-20 public education system based on religion; requires public K-20 educational institutions to consider anti-Semitism under certain instances of discrimination. ” Let’s look at the text together, and whereas the employment contracts we discussed previously prohibited criticism of Israel, this covers far more areas of thought and covers ALL PUBLIC SCHOOLING.

Here is the text of the House bill. My comments will be in bold beneath.

(7) A public K-20 educational institution must treat discrimination by students or employees or resulting from institutional policies motivated by anti-Semitic intent in an identical manner to discrimination motivated by race. For purposes of this section, the term “anti-Semitism” includes a certain perception of the Jewish people, which may be expressed as hatred toward Jewish people, rhetorical and physical  manifestations of anti Semitism directed toward a person, his or her property, or toward Jewish community institutions or religious facilities.

Remember, the Supreme Court has already ruled that there is no such thing as Hate Speech, and this seems to be an extremely broad and vague definition of anti-Semitism – it covers “rhetorical manifestations of anti-Semitism”. Also, you can’t define a term by including the term in it’s own definition. When will we see a bill to stop the discrimination and hatred against Christians? Don’t hold your breath, right?

(a) Examples of anti-Semitism include:
1. Calling for, aiding, or justifying the killing or harming of Jews, often in the name of a radical ideology or an extremist view of religion.

2. Making mendacious, dehumanizing, demonizing, or stereotypical allegations about Jews as such or the power of Jews as a collective, especially, but not exclusively, the myth about a world Jewish conspiracy or of Jews controlling the media, economy, government or other societal institutions.

So you can’t even debate whether jews “control the media” when it is demonstrably clear that they are highly over-represented in the media? You can’t even discuss their influence in “societal institutions”? Will we see these same protections for Whites? Will “Whiteness” still be criticized in schools and colleges? Of course.

3. Accusing Jews as a people of being responsible for real or imagined wrongdoing committed by a single Jewish person or group, the State of Israel, or even for acts committed by non-Jews.

Ummm, so will people still be able to accuse Whites as a people of being responsible for real or imagined wrongdoing committed by a single White person or group? You know the answer to that one already.

4. Accusing Jews as a people or the State of Israel of  inventing or exaggerating the Holocaust.

So this is the sole historical event that you cannot discuss or question. What does that tell you? That it is an integral part of the Victimhood Narrative used by the Marxists.

5. Accusing Jewish citizens of being more loyal to Israel, or the alleged priorities of Jews worldwide, than to the interest of their own nations.

Like when Chuck Shumer said that he declared he was a guardian of Israel? No one in Florida public schools can discuss this?

(b) Examples of anti-Semitism related to Israel include:
1. Demonizing Israel by using the symbols and images  associated with classic anti-Semitism to characterize Israel or Israelis, drawing comparisons of contemporary Israeli policy to  that of the Nazis, or blaming Israel for all inter-religious or  political tensions.

Now they need to define “classic anti-Semitism”. And will they still be able to compare all Conservative White people to “Nazis”? Of course.

2. Applying a double standard to Israel by requiring  behavior of Israel that is not expected or demanded of any other  democratic nation, or focusing peace or human rights investigations only on Israel.

What does that even mean?

3. De-legitimizing Israel by denying the Jewish people their right to self-determination and denying Israel the right to exist.  However, criticism of Israel that is similar to criticism toward any other country may not be regarded as anti-Semitic.

So will White people in White nations be afforded this same protection – no criticism of their right of self-determination and no denying White nations the right to exist?

The last section must be the “LOL” section – guaranteed to create lots of laughs among the knowing.

Can anyone see the exact parallel to the Bolsheviks assuming power in Russia in 1917? One of the first laws they passed was a restriction on “anti-Semitism”. From wikipedia:

The Council of People’s Commissars adopted a 1918 decree condemning all antisemitism and calling on the workers and peasants to combat it.[3] Lenin continued to speak out against antisemitism.[4] Information campaigns against antisemitism were conducted in the Red Army and in the workplaces, and a provision forbidding the incitement of propaganda against any ethnicity became part of Soviet law.[3] State-sponsored institutions of secular Yiddish culture, such as the Moscow State Jewish Theater, were established in Soviet Russia and the Soviet Union during this time, as were institutions for other minorities.

Already they are erecting the “digital gulag”, where dissidents will not be able to use social media, banking, or have a job if you have the wrong beliefs. Can anyone else see this coming? You know that these Speech Restrictions will spread throughout the states like the anti-BDS restrictions did. Remember – this bill was passed UNANIMOUSLY by the Florida Senate. No one thought this was a bad idea to restrict free speech in public schools? Does anyone have a doubt that we have an occupational government at this point? Will Whites get these same protections – in our own nations?

See you in the gulag (the digital one, of course). Here is the story from Florida Watchdog.

The Senate Monday may have given Gov. Ron DeSantis the perfect agenda-sweetener for his Florida Cabinet meeting next month in Jerusalem – a signing ceremony for a new Florida law requiring public schools to treat anti-Semitism as discrimination, and anti-Semitic speech and acts as racist speech and acts.

The Florida Senate unanimously approved House Bill 741 with all 39 members on the chamber floor Monday signing on as co-sponsors.

HB 741 – approved by the House 114-0 on April 11 – was substituted for its Senate companion bill, Senate Bill 1272, which had only progressed through one committee, on the Senate floor and adopted after senators consented to waive procedural rules to accelerate its passage.

After it is formally enrolled, the bill goes to DeSantis for the governor’s signature. He has 10 days to sign or veto any bill once it crosses his desk; approved bills left unsigned and un-vetoed still go into effect 10 days after transmittal.

In other words, DeSantis could ceremoniously sign it during his May 25-31 trip to Israel which will include a Florida Cabinet meeting at the U.S. Embassy in Jerusalem, likely sometime between May 28-30.

The Senate moved to introduce HB 741 Monday morning two days after a shooting at a San Diego-area synagogue and six months after the deadly mass shooting at a Pittsburgh synagogue.

GOP State Chairman Sen. Joe Gruters, R-Sarasota, who sponsored SB 1272, cited both attacks in describing why the measure is necessary to ensure students are properly educated.

“Anti-Semitism is on the rise, and we have the ability to do something about it. No one is born with hate in their heart,” Gruters said.

The fact that the Poway synagogue gunman is 19-years-old – recently emerged from 13 years of public school education – shows “our education system has failed,” he said.

“If we don’t do something now,” Gruters continued, “it will only get worse. I believe when the history books are written, it will be known that on this day, in this chamber, and at this moment, we made a statement against hatred.”

HB 741, sponsored by Rep. Randy Fine, R-Palm Bay, amends the Florida Educational Equality Act to add religion to the list of categories for which discrimination is prohibited, and adopts a 2017 definition of anti-Semitism encoded by the Miami-Dade County city of Bal Harbour and endorsed by the U.S. State Department.

Fine filed HB 741 in February as a response to the Boycott, Divestment and Sanctions (BDS) movement which he says is orchestrating anti-Israel campaigns using anti-Semitic tactics.

HB 741 also amends Florida’s hate crime statute to specifically include anti-Semitism, which it defines “as a perception of the Jewish people, which may be expressed as hatred toward Jewish people,” through such acts as:

Senate Minority Leader Audrey Gibson, D-Jacksonville, was the only lawmaker to cast a negative ballot against the measure during its committee rounds, objecting to potential freedom of speech challenges – which it is likely to draw – in SB 1272’s one and only committee hearing.

For that, Gibson was vociferously skewered by Republicans and Democrats and, within two days, had issued change-of-heart statements.

On Thursday, Gruters thanked Gibson for her support and assistance in waiving the rules to get SB 1272 on the floor so it could be amended into HB 741, adopted and sent to the governor.

“No one and no people should fear the practice of their religion and the exercising of their faiths; nor should they fear that their places of worship will be targets of hate and terrorism,” Gibson said. “And today I join my colleagues in sending this message on behalf of the Jewish community.”

Sen. Annette Taddeo, D-Miami, said the bill reflects a statement and a consensus. She explained the concept of mitzvah, which is the Hebrew word for a moral deed as commandment of faith.

“Today we’re doing a mitzvah by passing this bill,” Taddeo said and called on fellow senators to join her in signing on as co-sponsors of the bill.

By the way, there have been scores of murders of South African Whites who are being murdered because they are White. Has “our” (sic) government created legislation to help them? Does the US have an envoy to stop anti-White murders in Europe and South Africa?

Why the fuck not?! I think we all know. 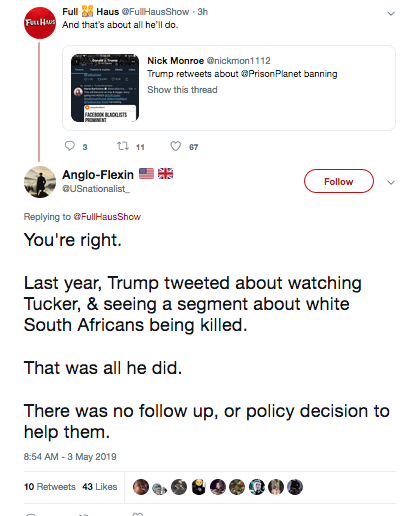