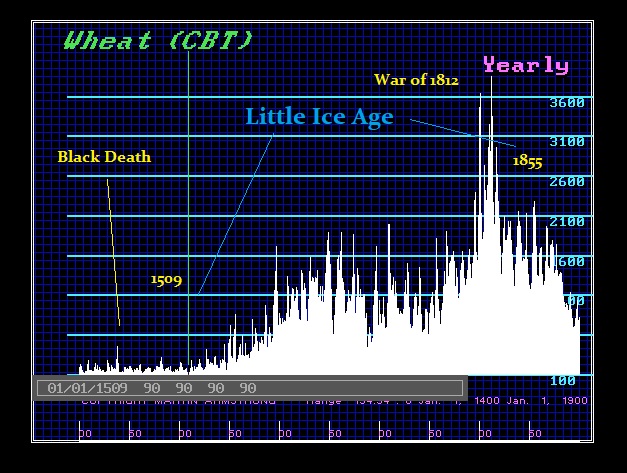 Food prices rose due to the first Black Death whereby 50% of the population died which created a shortage of labor. This is what ended serfdom and began capitalism with the payment of wages. Then the weather began to turn sharply colder as the sun went into a solar minimum for a protracted period of time. This was known as the Maunder Minimum, which lasted between 1645 and 1717. This was a period where the number of sunspots was generally fewer than 50 per year compared to our modern period of warming with 40,000-50,000 sunspots over a 25-year period.

The Maunder Minimum was a very prolonged period of minimum solar activity that lasted for about 72 years. Our model is projecting an initial low coming into play around 2022. The extended trend appears to be lasting into as late as 2061, but that should not be without years that show spike highs in sunspot activity. This does not appear to be a downtrend that is persistent into 2061. There will clearly be lower highs during this period, but the trend should flip back to global warming post-2061.