The Federal Reserve Bank of New York’s Center for Microeconomic Data today issued its Quarterly Report on Household Debt and Credit, which shows that total household debt increased by $219 billion (1.6%) to $13.51 trillion in the third quarter of 2018. It was the 17th consecutive quarter with an increase and the total is now $837 billion higher than the previous peak of $12.68 trillion in the third quarter of 2008. Furthermore, overall household debt is now 21.2% above the post-financial-crisis trough reached during the second quarter of 2013. The Report is based on data from the New York Fed’s Consumer Credit Panel, a nationally representative sample of individual- and household-level debt and credit records drawn from anonymized Equifax credit data.
…
Mortgage originations increased to $445 billion from $437 billion in the second quarter.

Mortgage delinquencies were roughly flat, with 1.1% of mortgage balances 90 or more days delinquent in the third quarter.
emphasis added 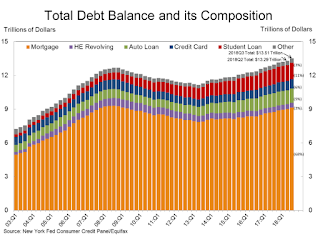 Here are two graphs from the report:

From the NY Fed:

Mortgage balances shown on consumer credit reports on September 30 stood at $9.1 trillion, an increase of $141 billion from the second quarter of 2018. Balances on home equity lines of credit (HELOC), on a declining trend since 2009, decreased by $10 billion in the third quarter and are now at $422 billion, the lowest level seen in 14 years. Non-housing balances jumped by $88 billion in the third quarter, with auto loans increasing by $27 billion, credit card balances going up by $15 billion, and student loan balances seeing a seasonally typical $37 billion increase. 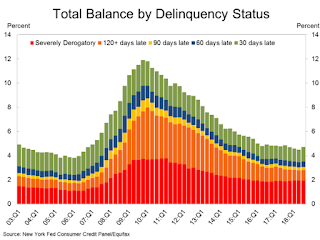 READ  CANADA just authorized the use of Pfizer`s genetic drug on childrens with ages between 12 and 15. First country in the world.

The overall delinquency rate increased in Q3.  From the NY Fed:

Aggregate delinquency rates worsened in the third quarter of 2018. As of September 30, 4.7% of outstanding debt was in some stage of delinquency, an uptick from 4.5% in the second quarter and the largest in 7 years. Of the $638 billion of debt that is delinquent, $415 billion is seriously delinquent (at least 90 days late or “severely derogatory”). This increase was primarily due to a large increase in the flow into delinquency for student loan balances during the third quarter of 2018. The flow into 90+ day delinquency for credit card balances has been rising for the last year and remained elevated since then compared to its recent history, while the flow into 90+ day delinquency for auto loan balances has been slowly trending upward since 2012.

There is much more in the report.

Student delinquencies up as U.S. household debt hits another record

NEW YORK (Reuters) – The total debt shouldered by Americans has hit another record high, rising to $13.5 trillion in the last quarter, while an unusual jump in student-loan delinquencies could provide another signal that the U.S. economic expansion is growing old.

Flows of student debt into serious delinquency – of 90 or more days – rose to 9.1 percent in the third quarter from 8.6 percent in the previous quarter, the Federal Reserve Bank of New York reported on Friday. That propelled the biggest jump in the overall U.S. delinquency rate in seven years.

It was a reversal after a period of improvement for student debt, which totaled $1.4 trillion. Serious-delinquency flows have been growing on auto debt since 2012 and on credit card debt since last year, raising red flags for some economists.

But of course, in that way that is so peculiar to those in government, he believes the Fed controls the ultimate fate of the economy and that cyclical recessions are mistakes in Fed policy: “I think the risks if we have a recession are very, very serious so they need to bend over backward to avoid that.”