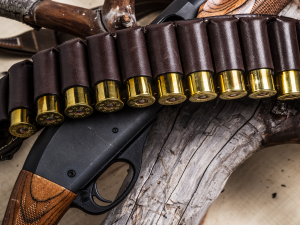 When it comes to tools and weapons, preppers need to get the most out of the things they own. They need gear that is low maintenance, portable, and perhaps most importantly, it needs to be versatile.
That’s because when you’re preparing for a disaster, you’re essentially getting ready for a situation where your very survival will be reliant on whatever you can store in your home. Or worse, whatever you can carry on your back. So no matter what kinds of gear you buy, you have to consider how many different uses you can get out of it in a pinch.
If you apply that standard to firearms, you’ll be asking yourself about how many situations that weapon would be appropriate for. The more versatile it is, the better it is for a prepper. You want firearms that can use a wide variety of munitions. Or better yet, you need weapons that are modular, and can be turned into multiple configurations. The following firearms fit that bill better than their competitors:
Sig Sauer P320
Weapons that are adopted by the military often go on to become iconic and popular among civilians. The Sig Sauer P320 isn’t one of those firearms, but it’s going to be real soon, because the US Army recently decided to adopt it as a replacement for the Beretta M9. And one of the biggest reasons why they adopted it, is that it’s incredibly modular.
What makes this gun so unique is that the serial number is etched onto the fire control unit, which is where the trigger, sear, and hammer are located. It’s a small metal mechanism that as far as the law is concerned, is the actual firearm. This means that literally everything else can be replaced, which arguably makes the Sig p320 the most modular pistol on the market today. There are tons of configurations. You can have a full sized .45 caliber pistol, and by switching out parts, you can easily turn it into subcompact 9mm, or a compact 40 s&w.
Pump Action Shotgun
Most shotguns are only somewhat modular. It’s pretty easy to change out the barrel, the choke, or the tubular magazine, and replace them with different sized parts. What makes the shotgun so versatile however, is the ammunition. You can fire birdshot for hunting or buckshot for close range self-defense. You can use slugs for longer distances, or you can use less than lethal beanbag rounds. A good shotgun can cover a lot of different bases.
Multi-Caliber Rifles
These types of weapons typically aren’t ideal for most dangerous encounters, on account of the fact that they are usually single shot firearms. They make up for that flaw by being very portable and versatile. They make a great “weapon of last resort” and are typically designed with preppers in mind.
That’s because they can fire a multitude of calibers. Guns like the Chiappa M6 come with a 12 gauge barrel on top, and a .22 WMR barrel on the bottom. You can buy a wide variety of rifled inserts that slip into the shotgun barrel, and allow you to shoot a total of 13 different calibers. As an added bonus, the gun weighs less than 6lbs and comes with a folding stock. With a gun like that, you can rest assured that no matter how bad things get, you’ll always be able to find compatible ammunition.
AR-15 Platform
This list wouldn’t be complete without the AR-15. Due to its design and popularity, this rifle has become one of the most modular weapons on the planet. Once you own a receiver, you can attach countless uppers in a wide variety of calibers, ranging from tiny rimfires, to pistol calibers and sizeable rifle calibers like the .308.
But that’s just the tip of the iceberg. There are nearly 400 different companies that make AR-15 type rifles, and thousands of different parts. Sights, stocks, handguards, and everything in between come in countless variations. You can build an AR that is a precision long range shooter, or a pistol caliber short barrel rifle. For every individual, there is a single AR build that is absolutely perfect for them. And by owning multiple uppers, you can reconfigure the gun to be useful in almost any situation.

READ  Road rage shootings kill or injure someone every 18 hours... Man murdered by angry residents after urinating in street
READ  So Companies Should Beg To Pay hacker Ransom In Bitcoin: The DOJ Will Find It And Return It In 4-7 days
561 views