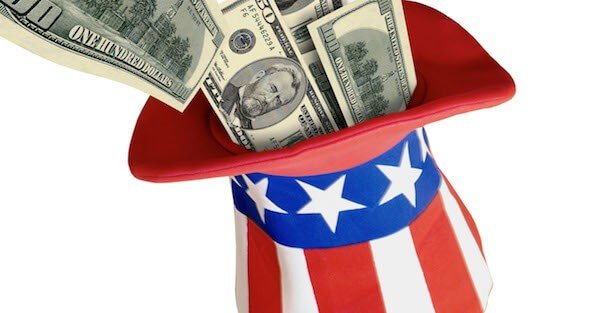 Last week I told you that the US government recently reported a negative net worth of MINUS $75 TRILLION.

That’s not a type-o. According to the Treasury Department’s annual financial report for Fiscal Year 2018 (which they just published last week), the US government is hopelessly bankrupt.

Now, I’m not talking about this trying to stoke fear and panic.

Quite the opposite– I’m hoping that this conversation results in calm optimism. But the point is that it’s an important conversation to have… because a number as large as $75 trillion absolutely has consequences.

To believe that any nation can be so desperately insolvent without suffering any negative impact is just plain foolish.

Debts have to be paid. Obligations have to be met. So at some point, with numbers these gruesome, something has to break down.

This is not a dire prediction or wild conspiracy theory. It’s an arithmetic certainty.

Remember, this isn’t even my analysis. The government itself acknowledges its $75 trillion insolvency. The Social Security Administration acknowledges that its trust funds will run out of money in 15 years.

This is happening. So let’s take a look at the government’s very narrow playbook:

Politicians are already acting as if nothing is wrong.

Sure, occasionally you’ll hear someone complain about the debt, or there will be a debt ceiling showdown. But no serious alarm bells are ringing.

And because they don’t make a big deal over the debt, no one else does either. Everyone just goes along as if there’s not a problem.

This is HIGHLY likely because it’s the most politically palatable option. The Bolsheviks are already coming to power under a mandate to soak the rich. They want wealth taxes, dramatically higher income taxes, corporate taxes, surtaxes, etc.

Problem is– it won’t help.

Since the end of World War II, tax rates in the United States have been all over the board. Back in the 1960s, the wealthiest paid a highest marginal rate of 90%! Now the highest is 37%.

During that period, corporate, individual, and capital gain rates have bounced around like a drunken pinball.

Yet throughout it all, despite how high or low tax rates have been set, overall tax REVENUE (measured as a percentage of GDP) has been more or less the same.

US tax revenue averages out to be about 17.7% of GDP, year in, year out, regardless of what actual tax rates are.

In other words, the US government’s ‘slice’ of the economic pie is about 17.7%, plus/minus a very narrow range.

Point is, they could jack up tax rates to the moon… but actual tax REVENUE won’t budge at all.

You’d think that they would recognize this– that eight decades of tax data would make them think– “Gee, if we can’t increase our slice of the pie, why don’t we just try to make the pie bigger…”

But no. They fall back on the same old ‘soak the rich’ mentality, because it gets them elected.

Since raising taxes won’t actually fix anything, their next move is to default.

And as I said earlier, that’s already happening.

In 2018 annual report, the Social Security Administration stated that its trust funds will run out of money in 2034, just 15 years away.

After that, they’ll have no choice but to dramatically cut benefits for current and future Social Security recipients.

Imagine paying into the system for your entire life under a promise that you’ll receive certain benefits, only to have that promise broken. That constitutes a default. And it’s already in the works.

Defaulting on creditors is a tricky one.

The top owners of US debt are as follows:

None of those is a good option, which leads to…

For thousands of years, governments in financial distress resorted to debasing their currencies and creating inflation in order to make ends meet.

Governments really like inflation, because it slowly reduces the value of the debt that they’ve borrowed.

And because inflation is so gradual (around 3% annually), no one kicks up much of a fuss, even though it steals prosperity year after year.

So most likely they’ll continue to print money in an attempt to create inflation and inflate the debt away.

These are all things that a reasonable person should plan on: higher taxes, higher inflation, default on Social Security, etc.

And again, this is based on the government’s own data.

But it’s not anything to fear– there are plenty of solutions.

Those assets will do well against inflation.

It also makes sense to create a robust retirement structure like a solo 401(k) or SEP IRA so that you’re not as dependent on Social Security… because that reckoning day is absolutely coming.

The government is practically giving us a date to circle on our calendars. Failing to plan for it is insane.