Economists who expected a quick recovery from this recession have been revising their forecasts. Mounting evidence suggests the May/June bounce was just that—a bounce, and not a return to prior trends.

I’ve been following Homebase, a payroll/HR data provider for small businesses, whose data gives us high-frequency and nearly real-time information. This is from their September report: 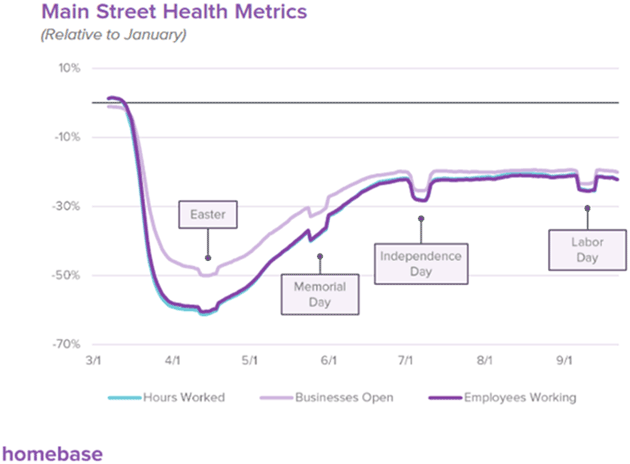 You can see a sharp decline during the initial coronavirus lockdown period and then improvement as many US states reopened.

But since then, activity has flatlined except for some holiday dips.

Not surprisingly, work hours dropped the most in places with the deepest and longest-lasting lockdowns, like New York and California. But even the best metro areas show a 5% to 10% drop, with many down 20% or more.

This points to a much longer recession than bulls think.

The official unemployment rate is now 7.9% but is certainly understated. Even 10% is likely optimistic.

There are 25 million+ people who are still getting some type of unemployment claims and job postings are down.

From the Daily Feather (courtesy of my friend Danielle DiMartino Booth):

Worse, even the small businesses that are hanging on are in major distress. A Lending Tree survey shows 43% have seen revenue drop by half or more, and 6% have already dissolved. 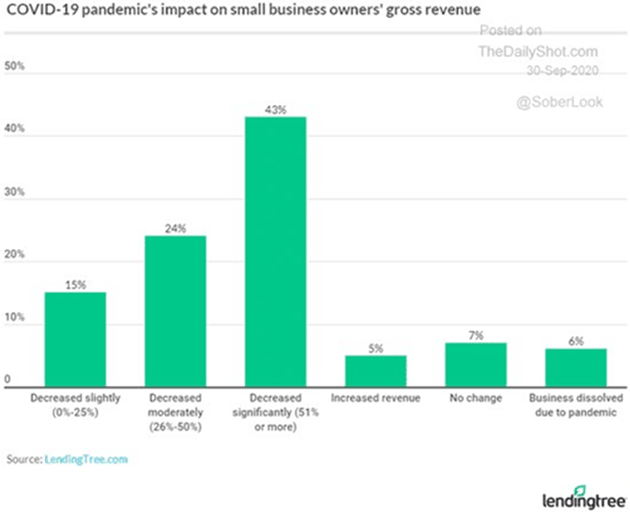 We have never seen anything like this in history, with a possible exception (percentage-wise) during the Great Depression. This is not the material from which V-shaped recoveries are created.

Worse, this recession has been inordinately destructive for the bottom 25% of income earners. 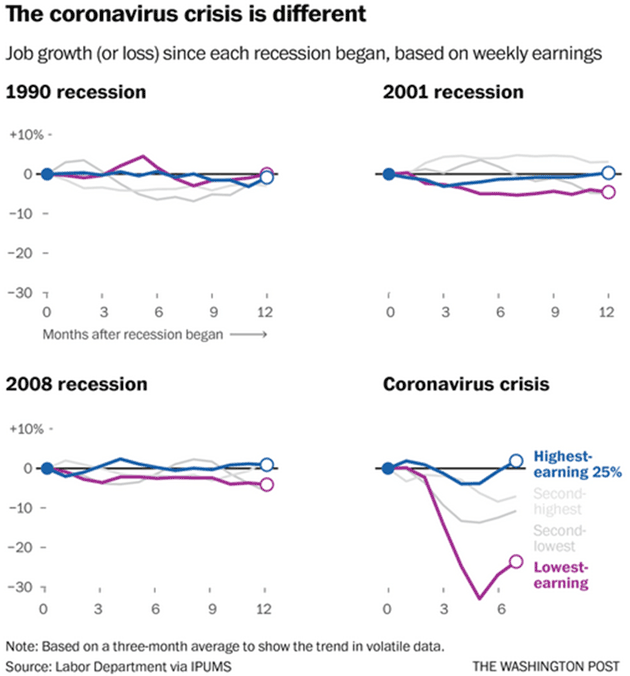 That is why it is absolutely critical that Congress pass some type of Phase IV relief bill. Consumer spending has held up due to the initial pandemic relief. Now many live on savings, if they have any. We are getting ready to fall off an economic cliff without more relief.

Obviously, much depends on how much the coronavirus case load increases/decreases over the winter, and whether a working vaccine can be approved and distributed. The logistics will take enormous coordination. It is doable but not guaranteed.

What if 2021, instead of being the start of recovery, takes the economy even deeper into recession? Mind you, I’m not predicting that, but it is a significant possibility that would need far more fiscal support than even the $2T+ Phase IV bill Democrats just passed in Congress. And because lower growth will mean lower tax revenue, we will add trillions more to the debt.

We can easily see another $3 trillion worth of debt in 2021. Easily.

Even if we see an effective vaccine widely distributed by spring to mid-2021, I think continued stagnation is the best case for GDP in the coming decade.

If we have another recession, the national debt will rise to $60 trillion by 2030. That’s just the nature of recessions.

I think we will probably see tax increases and maybe a major restructuring of the tax code, especially when we get to The Great Reset.

We will be open to new innovation at that point, which may prove helpful in the long run. Some kind of consumption tax (like the VAT used in almost every other country in the world), paired with an income tax only on high earners, would be far less economically distorting than the current mishmash.

The transition will be disruptive at best, and the politicos could easily turn it into a fiasco. But a $60 trillion debt could force us to take actions that we would otherwise not consider.