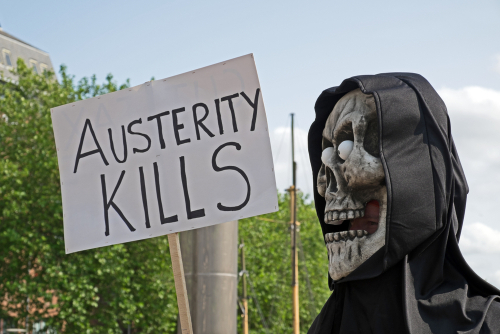 The entire AUSTERITY policy of Germany is really oppressing its people to the point that their assets rank nearly the lowest in Europe and below that of even Italy. A German earning just $75,000 annually ends up in the 50% tax bracket. The economics of Europe is really reducing the standard of living and this is really behind the Yellow Vest uprising. Germany has imposed its AUSTERITY economic philosophy upon the whole of Europe.

This is coming to a head with the clash over the Italian budget. This May we will see major elections in Europe and there is a rising tide against austerity. We are holding our WEC in Rome this year May 3-4, because this is an EXTREMELY IMPORTANT turning point for the entire world. The stock market rally in the USA from December was driven by capital pouring into the USA as Europeans bought what the Americans were selling. While retail participation is still at 50% of 2007 levels, brokerage houses are reporting that clients have record high cash in their account post-2009.

READ  Average Age of Cars & Trucks on the Road Jumps to Record - 12.1 years

The impact of the May elections will set the tone not just for Europe, but for the entire world.