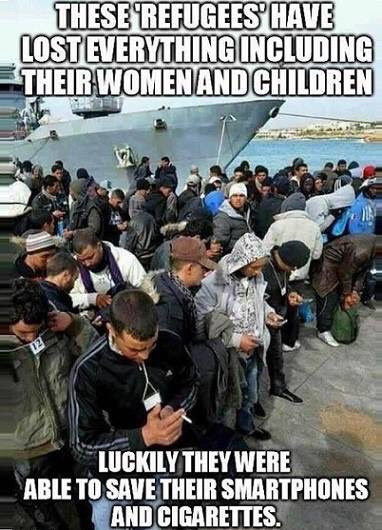 Angela Merkel, Germany’s Chancellor and dubbed “mutti Merkel”, mother of refugees, just committed what can be described as political seppuku. Again. This time, she threatened Italy with a new migrant-flood via German flights transferring so-called refugees. No, this is not a joke, but the sad political state of affairs in the European Union. Italy’s Interior Minister Matteo Salvini, who just became my personal hero, had a very short and concise answer to Merkel’s “proposal”: we will close airports to German flights bringing refugees to Italy. In other words, read my lips Angela: Italy will accept no more refugees. It’s your problem. Deal with it. And bugger off. Here’s from RT:

Rome has still not reached an agreement with Berlin on the repatriation of asylum seekers who had first registered in Italy, Interior Minister Matteo Salvini said, vowing to close airports to German flights transferring refugees.

“If someone in Berlin or Brussels thinks of dumping dozens of migrants in Italy via unauthorized charter flights, they should know that there is not and there will be no airport available,” Salvini said in a statement, adding that Italy will “close the airports” just as it earlier closed its ports to NGO vessels carrying migrants rescued in the Mediterranean.

His sharp statement comes in response to the rumors first circulated by the Italian La Repubblica daily that Germany plans to speed up repatriation procedures ahead of the regional elections in the state of Bavaria, the home state of the Interior Minister Horst Seehofer.

The first charter flight carrying asylum seekers from Germany to Italy is reportedly scheduled for Tuesday, October 9, the media reported. Other media reports set the date of the flight on Thursday, October 11. Germany’s refugee and migration agency, the BAMF, allegedly already sent “dozens of letters” to the would-be repatriates informing them about the planned transfers to Italy, according to La Repubblica.

Earlier, the German dpa news agency also said that such a flight is scheduled for “the coming days.” This information, however, was neither confirmed nor denied by the German authorities. Rome fears that Germany might eventually attempt to send back to Italy as many as 40,000 people, who arrived there from the southern European country, the Italian media report.

In case my readers do not know what’s going on with the so-called refugee crisis in Europe, it was Angela Merkel who invited people from Africa and the Middle East, i.e. from countries where there’s no war to speak of, to flood Europe, back in 2015. Merkel, by her own volition, decided to break all the rules and to open-wide the flood gates, via an unilateral decision which ended up with the Dublin Accords to be scraped. Again, in case you don’t know about the Dublin Accords, let me  enlighten you: any so-called refugee seeking refugee status in an European country must stay put and fill asylum papers in whatever 1st country he arrives in. Millions of welfare shoppers currently in Germany or Sweden skipped dozen of safe countries when they’ve entered Europe (Italy, Hungary etc). After Merkel’s free for all “welcome to Germany” rhetoric, untold millions of so-called refugees (in reality, welfare shoppers) settled in Germany seeking asylum and a better life on the German taxpayer’s dime.

And now, seeing that her architects, space-physicists and engineers are ripping Germany apart instead of contributing to the social-welfare of Germans (paying their pensions and all that liberal propaganda), Merkel is trying to get rid of her beloved refugees by using the same Dublin Accords she chose to ignore in the first place. Hypocrisy, thy name is Merkel.

READ  PJW: An artist in Italy has just sold an “invisible sculpture” for 15,000 euros. It’s literally nothing. How far have we fallen from the Sistene Chapel to this meaningless crap?

The common sense approach to this extravaganza would be this: if you want to get rid of unwelcome (oh the irony) and also illegal asylum seekers, you should deport them back from where they came from. The EU refugee crisis is owned by German politicians, and Italy has nothing to do with it. It’s the German people who enabled this crisis to appear in the first place by voting  all these crazy globalist politicians into public office. Again, it’s their problem, not Italy’s.

This crisis was created by the left for their own political benefit. When liberalism fails (and it does every time due to its innate lack of realism), others must fix the mess they made. You can call that “right wing” or “fascist” or whatever, but it still comes down to the total irresponsibility of the left’s demented quest for “multiculturalism” and “vibrant diversity”. By the way, the so-called neoliberal economic system is a product of globalism, another leftist ideology. Thing along the lines of USSR, internationalist-communism, now re-branded globalism.