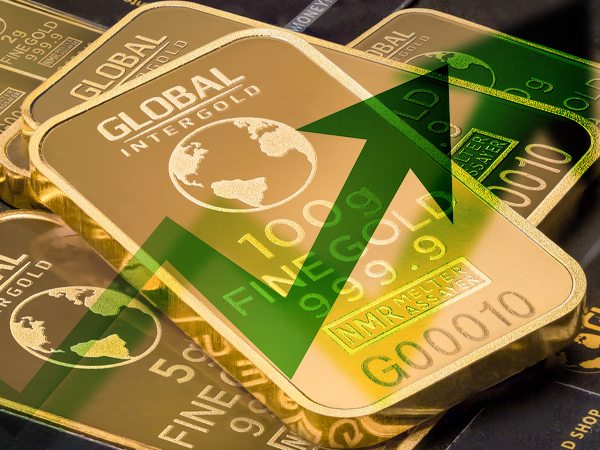 The jump in price followed news the Fed may act “dovish” and cut rates as soon as July. According to one CNBC article:

The central bank predicts one or two rate cuts in its set of economic predictions, but not until 2020. Despite cautious wording in the post-meeting statement Wednesday, markets are still betting the Fed cuts, as soon as July.

You can see the moment gold prices spiked in the chart below for spot gold: 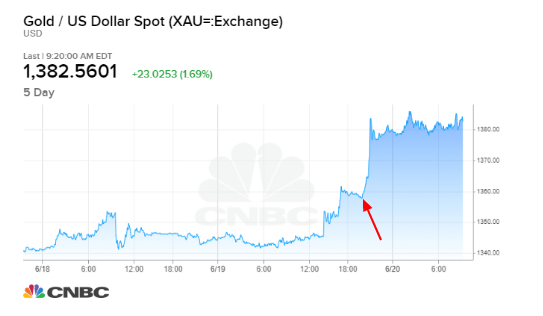 In their most recent FOMC meeting statement, the Fed maintained rates, but what set the market ablaze were two key pieces in that statement and a comment made by Chairman Powell.

Here are the key pieces from the FOMC statement:

1. In light of these uncertainties and muted inflation pressures, the Committee will closely monitor the implications of incoming information for the economic outlook and will act as appropriate to sustain the expansion, with a strong labor market and inflation near its symmetric 2 percent objective.

2. Voting against the action was James Bullard, who preferred at this meeting to lower the target range for the federal funds rate by 25 basis points.

Mr. Bullard wanted to cut rates now, and the Fed seems to be hinting it will act to sustain economic expansion if it gets the right information, which usually means cutting rates.

Fed Chairman Powell then opened the door for possible future rate cuts by saying the following in a press conference: “Many participants now see the case for somewhat more accommodative policy has strengthened.”

Not long after, gold prices responded positively to the news.

Gold May Be Setting Up for a “Bull Run”

The recent spike may be good news, but it’s possible gold might be breaking down a few barriers and setting up for a longer-term trend. This is according to Michael McCarthy, chief market strategist at CMC Markets Asia Pacific Pty, as reported in a Newsmax article:

The important aspect of this run higher is that it’s breaking through important technical resistance levels, so we’ve also got technical impetus adding to that fundamental shift in monetary conditions… Throw in a weakening U.S. dollar, we’ve got every reason to expect a good performance from gold.

Historically, when the dollar weakens substantially, the value of precious metals such as gold and silver generally rises because they represent safe-havens and stores of value for investors.

And according to Tom Essaye in a CNBC article, several ingredients, including a weakening dollar, seem to be coming together to boost gold’s demand:

The global fundamental backdrop remains unclear, which is keeping a flight-to-safety trade alive. But with real yields on bonds declining, gold’s appeal as a safe haven is growing, all while a weaker dollar is supportive of commodities broadly.

Maybe it’s time for another trip up “Bull Mountain?”

Now is the Time to Analyze Your Retirement Plan

It remains to be seen if the current spike in price will continue to develop into a longer-term bull run. But some of the ingredients that support such a trend are there, like geopolitical tension, uncertainty in the market, and a renewed interest in gold.

And it’s not only gold that’s reaping benefits. Silver prices also saw a boost after the Fed meeting. As more support fall into the laps of physical precious metals, the sooner you’ll want to add some to your portfolio.