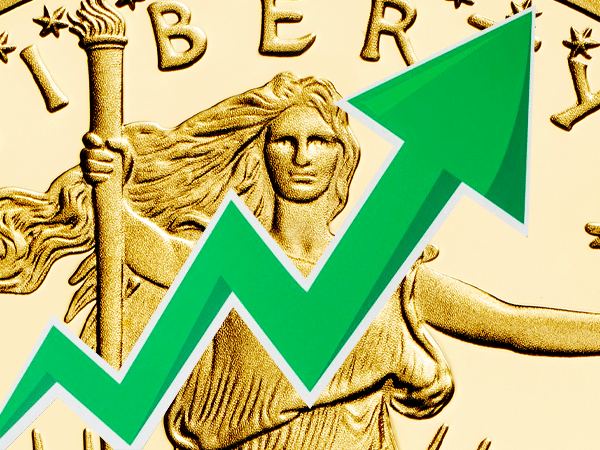 In the past few days, the price of gold has had a setback, dropping from its fresh all-time highs to back below $2,000.

After a meteoric rise over the past few months, this pullback was not only expected, but may be the beginning of an opportunity to “buy the dip.”

In fact, this pullback could represent the last time you see gold below $2,000.

As we’ve already covered in this space, the dollar has been weakening quite a bit recently, moving down on the U.S. Dollar index from a high of nearly 103 in mid-March to its current level in the 93 range.

You can see the 5-month dollar index below:

But in the context of gold losing ground this week, Agora’s 5-Minute Forecast makes a critical point: “Intriguingly, gold’s loss has not translated to the dollar’s gain.”

The key word in their statement is “intriguingly.”

Here’s why it’s intriguing: When you compare gold’s price during the same time frame (from March to present) it’s been on an overall rise in value – even when you account for its recent dip in price:

Agora also highlighted the recent dip as “the day that’s finally serving up a buy-the-dip opportunity in precious metals.”

In a note to investors, VanEck “reasserted the case for gold investing,” highlighting negative “real interest rates” as a possible reason for considering the precious metal. Then they laid out their prediction:

If one believes, as we do, that the current central bank stimulus to fight the COVID-19 virus, along with elevated levels of systemic risks, are similar to those during the global financial crisis, then $3,400 may be the target for this bull market. This target comes from taking the post-financial crisis move of 150% on top of the $1,350 gold price base in the summer of 2019.

They followed their prediction up with a shocker: “Of course, if there is a burst of inflation, major U.S. economic weakness or uncertainty, prices may go much higher. Some technicians also believe the price target could be over $4,000.”

Other experts have chimed in on the recent trend in gold’s price, some before the recent dip, but still strengthen the case to buy…

Barry Dawes of Martin Place Securities told CNBC, “The gold market is ‘very strong and could hit $3,500 in two years.’”

The same article noted an idea similar to that of VanEck, stating: “Long-term low interest rates and a tight gold market are factors that could continue to drive the rally in the precious metal.”

“If you look at the technical picture, you could actually take this gap from the bottom up and going to the top, that gives you about $2,834 and that would be (an) initial target probably that you could achieve quite fast.”

Matt Maley, chief market strategist at Miller Tabak, spoke to CNBC about the expected pullback: “Again, when you get these kinds of extremes, it takes more than just a few days for it to work off.”

So, assuming it plays out like these experts predict, after a pullback period, gold has the potential to continue the longer-term trend it started back in March.

And if that does play out, it could bode well for those who buy the dip.

It’s super-easy to keep your eye on gold and forget about silver, its less-expensive counterpart.

This week, the “fleet footed” cousin to gold also experienced a dip in price of its own.

But it’s on the rise again, and since March, has followed a similar trajectory in value as gold has.

So examine your retirement savings, consider your risk levels, and look at adding precious metals, such as gold and silver.

Not only have they proven to be a good hedge against dollar debasement and inflation in the past, but it’s possible neither metal will get much cheaper in the near future.