The U.S. Energy Information Administration — under the Department of Energy led by Secretary Jennifer Granholm — releases “short-term energy outlook” reports each month to provide information on liquid fuels and forecast their future trends. Their report issued December 7, 2021 — archived here — notes that the forecast “remains subject to heightened levels of uncertainty related to the ongoing recovery from the COVID-19 pandemic” but proceeded to estimate that “U.S. GDP will grow by 5.5% in 2021 and by 4.4% in 2022.”

And here’s what the Biden administration predicted for gasoline in 2022, just six months ago:

U.S. regular gasoline retail prices averaged $3.39 per gallon (gal) in November, a 10 cents/gal increase from October and $1.29/gal higher than in November 2020. The November monthly average was the highest since September 2014. We forecast that retail gasoline prices will average $3.13/gal in December before falling to $3.01/gal in January and $2.88/gal on average in 2022.

Why would Granholm want gas prices that low? Energy Secretary Jennifer Granholm sings the praises of banning gasoline in music video that should’ve been left in the ground.

In the service of reducing carbon emissions, Democrats have long openly worked to raise the price of fossil fuel energy. They have done so by proposing carbon taxes, cap-and-trade schemes, higher leasing fees, and other measures to jack up costs so people burn less of it. This is why Barack Obama said, in answer to a related question about electricity, that his energy plan would make prices “necessarily skyrocket.” This is why Democratic Rep. Ro Khanna praised BP’s CEO less than six months ago for pledging to reduce oil and gas production by 40% by 2030. Reductions in oil production and rising gasoline prices are part of the Democrats’ agenda and the Paris climate agenda.

There’s even more to it than that. Over the past decade, the Democrats’ overt hostility toward fossil fuels has even driven companies in the industry to sideline production, purely for public relations purposes, while prioritizing meaningless, politically correct carbon emissions goals. How can Democrats suddenly feign outrage at their incredible success in influencing the industry?

Is it a mystery why Democrats aren’t doing a sack dance and celebrating the salvation of planet earth?

There’s the small matter of their political survival, of course. It would be unseemly — like doing a jig at an Irish funeral — to celebrate other people’s pain. And it would cost many Democrats who are secretly jubilant about high gas prices their political careers.

Instead, Democrats are pretending to look for a way to “ease consumers’ pain.”

In September of 2019, after CNN’s seven hour “climate change town hall,” Bryan Preston wrote, “Seriously, if you see all of the above — which is just a sample — and vote for any of these people for any office at any level, it’s on you. If you like Venezuela, voting for any of them will bring you a whole lot of Venezuela.”

And as Kate of Small Dead Animals wrote after the CNN horror show, “Don’t make the mistake of thinking they don’t mean it.”

● Aren’t California’s High Gas Prices What The Left Have Wanted?

● NBC, the Washington Post, and the New York Times in lockstep call for higher gas taxes.

Exit quote: “Under my plan, energy costs will necessarily skyrocket…”

● Biden praises high gas prices as part of ‘incredible transition’ of the US economy away from fossil fuels.

● Team Biden might be purposefully grinding down the middle class. 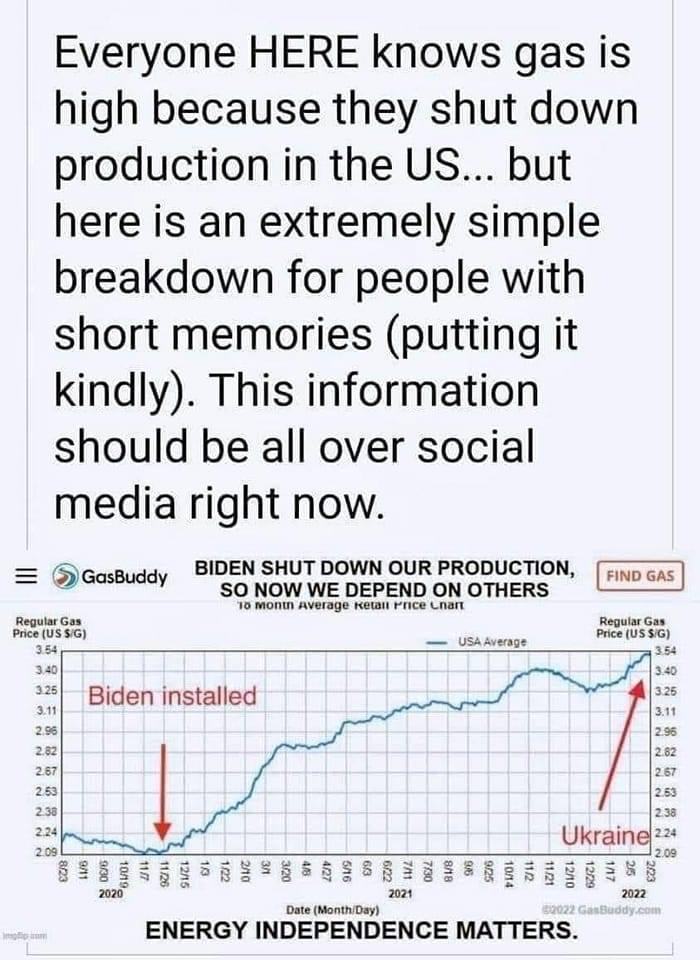