What would it mean to have a fair tax system? Would individuals pay more than companies? And would people pay more taxes through consumption, or when they earn an income? This visualization contains a snapshot of different tax categories for OECD member countries, demonstrating how there are lots of different ways to raise revenue. 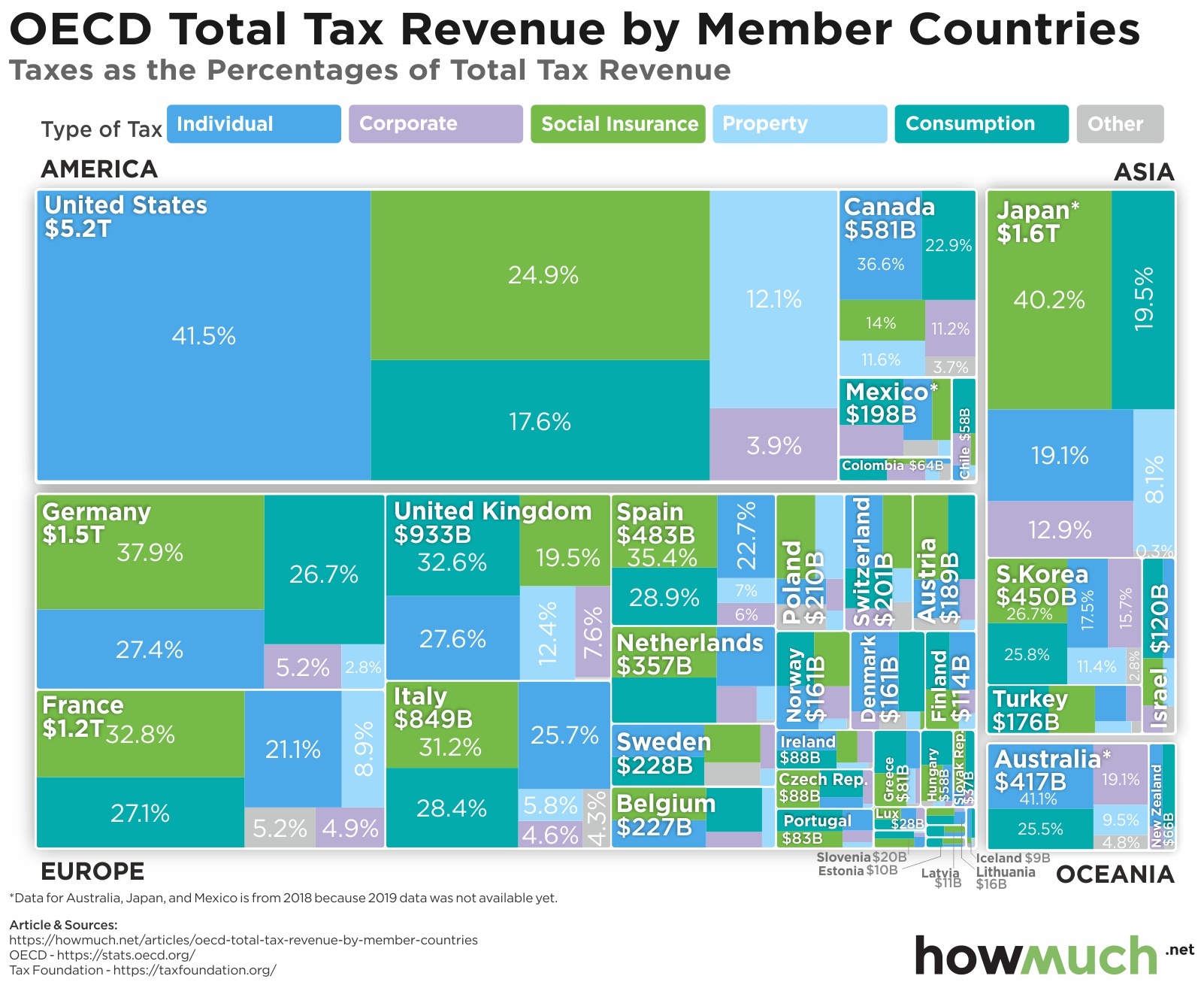 We found the data for our visualization from two different places. We got total revenue details by country from the OECD. The Tax Foundation then took these numbers and calculated the percentage of different types of taxes by country. It is worth pausing to consider the methodology behind these numbers before diving into a discussion of the results. The OECD has its own way of placing types of taxation into different categories, which creates an apples-to-apples comparison across countries. And data for specific countries like Australia, Japan and Mexico is from 2018, the latest for which information is available. All other numbers are from 2019. We sorted each country by the total tax revenue grouping countries by continent, showing both the overall picture of which types of entities pay the most in taxes as well as the relative ranking inside each country.

See also  NeverTrump vs. NeverTrump, you love to see them beating each other up.

*Data for Australia and Japan is from 2018 because 2019 data was not available yet.

It’s no surprise that the U.S. raises the most overall tax revenue of any country in the world. However, with $5.2T in total revenue, an astonishing 41.5% ultimately comes from individuals. Only Denmark has a higher rate at 52.4%. In the U.S., 24.9% of the total derives from social insurance, 17.6% from consumption taxes, 12.1% from property and only 3.9% from corporations. This means that companies are paying a far smaller share of tax revenue than individuals.

The situation in the U.S. is remarkably different from all the other OECD countries. For starters, social insurance and consumption taxes generate a lot more revenue in other countries than the U.S. In fact, social insurance is the top tax revenue generator in a lot of places, including Japan (40.2%), Germany (37.9%) and France (32.8%). And the comparative amount shared by individuals is substantially less across the developed world compared to the U.S. In a lot of countries, individuals don’t even contribute 20% of their incomes to total taxation, like Colombia (6.2%), Slovenia (14.3%) or Portugal (18.4%). That’s because other entities, like companies, pay a lot more in taxes in countries like Japan (12.9%) or Australia (19.1%) compared to the U.S. (3.9%).

See also  You are witnessing the wholesale devaluation of a debt system.... Sooner or later, if you live beyond your means it catches up with you. People, corporations, nations.

Individual taxpayers end up paying a big chunk of total tax revenue in countries other than the U.S. through consumption taxes. The Value-added Tax (VAT) is an obvious example of this. A tax system based around VAT means that every time one business “adds value” in the supply chain, a tax is due to the government. This adds up over time as finished products get made and brought to market, and it’s usually passed to consumers through higher prices.

Why do you think individuals pay so much in taxes in the U.S.? Should the U.S. switch to a tax system more focused on consumption like the rest of the developed world? Let us know in the comments.