Central bankers and media handlers must be laughing at how easy it is to slaughter the Bears and doubters with another fake-news round of trade-deal rumors and another Fed parrot being prompted to repeat some dovish mumbo-jumbo.

It’s not just tough being a Bear in a market rigged by trade deal rumors, Federal Reserve dovishness, a tsunami of Chinese liquidity and $270 billion in stock buy-backs in the first quarter–it’s impossible. Even “smarter than the average Bear” Yogi couldn’t beat the market, and so he ended up taking one for the Jellystone team so other Bears might live to fight another day: 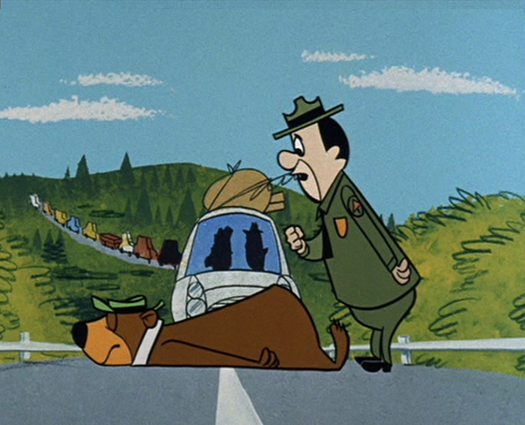 Perhaps the best way to describe the impossibility of being a Bear in a rigged market is to employ an analogy. (Not that a rigged market is actually a market; it’s been transformed into a simulacrum “market” that’s the one signifier of economic well-being: if the “market” continues lofting higher, all is well with the economy and indeed, the entire status quo.)

Let’s start with a sports analogy.

Imagine you’re on a basketball court.

You’re being guarded by Myles Turner, the NBA’s leader in blocked shots.

You make it to the half court line and find a chain-link fence blocks the court a few feet from the line, meaning your only shot is from half court.

When you manage to release a Hail Mary shot, a steel plate slams down on top of the rim, blocking any ball that might have lucked into the net.

That’s what being a Bear in a rigged market is like.

Here’s another analog, courtesy of my friend and colleague Adam T.:

You are David, armed only with a sling and a projectile, entering the arena to face the fearsome Goliath.

Instead of a rock, you’re given a foam ball.

Meanwhile Goliath has a bazooka.

You get the idea. Bears don’t have a prayer in a market this rigged.

Now by all rights, declaring the Death of Bears should top-tick the rally and trigger a reversal, much like the infamous magazine cover curse or the hubris of constructing the tallest-building-in-the-world ushers in a massive global reversal of fortune.

But even black magic and portents appear powerless against a market completely rigged to melt up regardless of external realities, especially economic-financial data that isn’t itself fully rigged.

Pretty much the only factors that could give Bears a tiny sliver of hope that the rigged market might collapse under its own weight are:

1. an invasion organized by the Central Bank of Mars to take control of Earth’s resources and assets, or

2. Goldman Sachs has built a massive short position and is poised to flush the market lower to reap some quick profits from the panic-stricken decline.

Central bankers and media handlers must be laughing at how easy it is to slaughter the Bears and doubters with another fake-news round of trade-deal rumors and another Fed parrot being prompted to squawk some dovish mumbo-jumbo.